Not Just Ukraine: Biden Has Brought Crisis to Taiwan 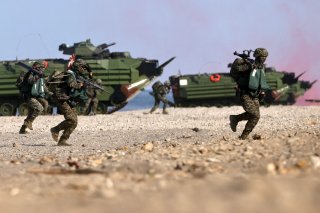 President Joe Biden’s Russia policy has been the opposite of Theodore Roosevelt’s prescription for peace: “speak softly and carry a big stick.” His personal attacks on Vladimir Putin and his calls for regime change have come coupled not only with unconvincing official denials of the meaning of those words, but with all too convincing reductions in America’s deterrents against Russia.

A person of Putin’s character could be expected to want to teach Biden a lesson about reality.

We have seen the consequences in Ukraine. We are paying a high price for it.

Biden is acting similarly in many respects on China. He could bring the same results down on Taiwan.

Let us start by becoming clear about how Biden invited Putin into Ukraine. It began all the way back when he pulled out America’s small contingent in Afghanistan. That’s when Russia and China started publicly salivating over Ukraine and Taiwan. All of America’s allies became nervous about U.S. reliability, so Biden reassured them in a way that compounded the problem: he said we’d defend our Article V treaty allies, period. In face of a public outcry, he added: maybe Taiwan. No one else. It amounted to saying that Ukraine was there for the taking.

Back when I was studying foreign policy, we were all taught about “the Dean Acheson mistake”—the time he invited the invasion of South Korea, by defining America’s defense perimeter in Asia without including it. We’re still paying dearly for that mistake. Biden apparently never got the message.

There were many other steps by which Biden invited Russia in. He stopped sending Ukraine the weapons that Donald Trump had quietly sent there for four years—and Trump, who was personally polite to Putin, had sent them without the crisis ensuing that Barack Obama’s people had argued would inevitably come of arming Ukraine. He capitulated to Angela Merkel on the Nord Stream II pipeline, something treated by Russians, in 2022 as in 2014, as a green light for twisting Ukraine’s arm and invading when it didn’t say “uncle.” He did nothing when Putin massed troops on the Ukrainian border for the better part of a year. He merely said it would be foolish for Putin to invade, and he’d suffer economic sanctions—but meanwhile reassured Putin that the United States wouldn’t defend Ukraine if Russia invaded.

Then, at the last minute, Biden sent a trickle of weapons. The administration’s plan, we can all remember, was for Ukraine to get totally occupied in less than a week, and then a resistance might ensue that for some reason Biden would finally feel alright about arming, never mind that this would be much more dangerous—and less effective—than seriously arming the country in advance to defend itself. Analyzed objectively, this “feel-good” matter seems to have been decisive for Biden: the guiding concern was to be able to say that Washington hadn’t done anything that might get called aggressive or provocative.

The results were predictable: Putin invaded Ukraine. The danger of nuclear war, invoked by Biden as a reason for his weakness, became very real because of that weakness. Biden got sucked into the conflict one step after another, publicly shamed into giving Ukraine a few more weapons each time, although they were too little too late. He publicly argued each time against the weapons and said that providing them would “provoke” Putin, but Biden and his people provoked Putin through rhetoric that was far more confrontational than any actions they were afraid of taking. But they blindly praised themselves for not being provocative; America, they said, was not to blame for the escalations that it kept getting sucked into.

Of course, actual motivations consist not only of proclaimed good intentions but of predictable probabilistic consequences. These probabilities can never be fully suppressed from the conscious mind by rhetoric about intentions. That is the lesson of realist theory from Machiavelli to Weber to Pareto to Burnham. They are a part of the real intentions.

There is nothing more immoral than to induce a war by taunts coupled with weakness; to keep a war going on endlessly, by deliberately trying not to win while refusing to accept losing either. When you do this, there is nothing more morally blind than to praise yourself as the good guy because you don’t have any aggressiveness or self-interested ambition.

Foreign analysts can be driven to paranoia by this kind of American behavior, whether it be Obama’s in Syria or Biden’s in Ukraine. Many Russian writers and analysts, for example, have tried to explain it as a scheme for bleeding Russia in an endless war; while others have argued it is an American theory of creating a “controlled chaos” in which everyone else will eventually give up, and the wishes of a supposedly omniscient-omnipotent America will then prevail without ever having to win. Sadly, these are far too rationalistic explanations, the sort of thing that some not-too-bright American bureaucrats also come up with when trying to make sense of an absurd policy. The psychological explanation holds more water.

Ukrainian president Volodymyr Zelenskyy was right when he said that the blood of thousands of Ukrainians is on the hands of the Western leaders who have refused to provide the weapons Ukraine needs to defend itself. Kyiv shamed the Biden administration into giving more arms, but not into giving up its perspective that it would be dangerous for Ukraine to win. That explains why at each stage the arms are too little too late.

Only Putin manages to be even more guilty than Biden for this war.

It’s not the first time this policy has brought on an invasion of Ukraine. The Obama administration did the same thing in 2014 by not providing lethal weapons for Ukraine to defend itself. The same arguments and rhetoric gave Russia a special privilege to feel provoked by anything the United States might do. The same foreign policy team making the same argument, and conceding “escalation dominance” to Russia. With the same result: Russia invaded.

On China, the policy is fortunately not identical, as when Congress and the press made Biden reaffirm strategic ambiguity on Taiwan; but unfortunately, it is too similar for comfort: strong rhetoric and weak behavior. Lift some sanctions. Talk about lifting Trump’s tariffs. Publicly justify Xi Jinping taking special privileges to get provoked by us. Positively encourage him to do so. Publicly argue that we’d be guilty of provoking him if we did this or that.

Meanwhile, do something truly provocative: rub China’s nose in the dirt with an excess of democracy talk. Invite Taiwan to a “summit for democracy” that serves little purpose besides being a personal vanity event for Biden—praising his friends, insulting his enemies. Carry out a campaign promise this way to talk up democratic values. Get credited by the media with doing this and being a better American than Trump. Talk about a global struggle to the finish between democracy and autocracy. Lose actual friends by the divisiveness of this. And, for enemies, make this sound as threatening as you can, while in fact doing nothing.

If you want to incite a dangerous counterreaction, it is just what the doctor ordered.

If you want peace, but are unwilling to surrender, then stop inviting war. Deter invasion. Control what comes out of your mouth. Do what we did for decades during the Cold War: prepare for war, have enough weapons in place to respond to any attack with equal or greater force, threaten your enemy back equally if your enemy threatens you. Avoid making gratuitous rhetorical threats. Promote democratic values in a civil and sober manner, with full regard for the realistic limitations of many countries and the concrete interests at stake.

Deterrence is no fun; it is never as safe as we’d like. But it is safer and far more ethical than inducing wars by holding passive and then backing into them. It eschews a false innocence. It accepts the guilt of asserting our interests and taking responsibility. It is not our eternal goal for the world. But it is necessary in the world as it is today.

Ira Straus is an independent foreign affairs analyst and Chair of the Center for War/Peace Studies. He has taught international relations in colleges and has worked for four decades in organizations devoted to the Western alliances and their relations with Communist and post-Communist regimes.