Not Quite China's Century? An Early Appraisal 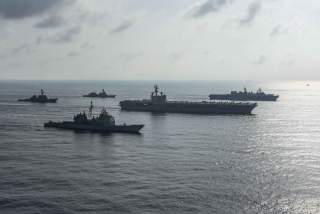 As part of a broader assessment of the state of Sino-American competition in Asia, we examined the economic and diplomatic balance of power in Asia in a previous article. Here, we look at how both states are faring across the military and ideological realms and conclude with some thoughts about how the United States and its allies can move forward.

As China’s economic and political capabilities have grown, so too has its military. China’s decades-long military modernization and build-up have achieved impressive results. Beijing currently boasts the world’s second-largest defense budget, the world’s largest conventional missile force, and the largest navy and coast guard. It also has a maritime militia that is integrated into China’s military command structure and advances Beijing’s sovereignty claims in the East and South China Seas. These advances have not just been quantitative, but qualitative as well. According to open-source Pentagon assessments, the PLA has invested billions of dollars in new capabilities, including artificial intelligence, hypersonic technology, and offensive cyber capabilities. China has also increased its presence and power projection capabilities by continuing to build infrastructure in the South China Sea, and by working to acquire a network of ports throughout the Indian Ocean region and further afield.

(This is the second article of a two-part series, the first one can be read here.)

In the South China Sea, China has militarized their artificially constructed islands with the installation of advanced radar and other surveillance systems, the deployment of anti-aircraft and anti-ship missile systems, and the routine presence of naval vessels, coast guard ships, and maritime militia units. In addition, the Chinese are putting the finishing touches on three major fighter-bomber bases in the middle of the South China Sea. In sum, China now operates forces in the region that far surpass those of all of the other littoral states combined. In reality, all other regional powers are overwhelmed by the Chinese military presence and the aggressive nature of its operations. The implications of these investments have been three-fold: a growing overmatch between China’s own forces and those of its neighbors; an ability to raise the risks for the United States if it chose to challenge China in regional disputes; and an increasing capability to project its power outward—across the Indian Ocean and into the Middle East and even the polar regions.

China's growing military power has conferred on it many advantages, but it has also brought costs and revealed structural weaknesses. Changes in the composition of China's armed forces mean that it will likely face escalating personnel-related costs which will consume larger portions of the military and national budget. Additionally, acquiring and maintaining cutting-edge capabilities will come at a significant price. Advanced weapons systems and associated infrastructure are expensive and, as a leading military analyst put it "China's cost advantages decrease as military equipment centers less on labor and more on advanced materials and technology." Moreover, China's rapidly aging population and slowing economic growth means that, short of a significant crisis, Beijing is unlikely to be able to spend much more on its military than it has over the past two decades. If demographics are hard to overcome, so too is geography. China's island-building campaign in the South China Sea has certainly altered some of the strategic geography of the region, but it has not enabled Beijing to erase or overcome its geography, which is both more confined and more contested than America's.

While America's military lead has eroded, it still retains advantages in critical areas. U.S. defense spending remains nearly three times that of China. The U.S also operates a set of regional bases, aircraft carriers, advanced tactical aircraft, a network of military satellites, and nuclear-powered submarines. The American military is a battle-hardened force that has been fighting for the better part of the last twenty years and is trained to adapt its techniques under stressful conditions. And perhaps most powerfully, the United States sits at the center of a global network of alliances, consisting of more than thirty allies, another thirty or so quasi-allies, and even more security partners. This is to say nothing of America's nuclear superiority, advantages in undersea warfare, and space-based intelligence, surveillance, and reconnaissance capabilities. Not only does the United States still possess the most powerful military in Asia, but it also sits at the heart of multiple, overlapping Asian alliances and has considerable experience coordinating complex military operations and partner forces multiply the military assets arrayed against China.

And that says nothing of activities undertaken without the United States—such as Japanese military aid to the Philippines, Vietnam, and India—or the increasing naval presence and operations of non-Asian states, as highlighted by recent British and the French deployments to the region. While China prefers excluding the collective capabilities of the U.S. Asian alliance system, it is clear that the Chinese frame it this way to try to negate the advantages that the United States and its partners hold together.

The Trump administration has taken some steps to try to improve the U.S. military position in Asia. Defense spending overall is up significantly over the last two years, and the State Department has announced $300 million in funding for regional security in the Indo-Pacific. The administration has also supported Congress' proposed Asia Reassurance Initiative, which would authorize $7.5 billion to fund military exercises and an enhanced defense posture in the region over the next five years. The Department of Defense has conducted freedom of navigation operations with greater regularity under the Trump administration, and these operations have been effective in pushing back on China's expansive sovereignty claims in the South China Sea. The administration also announced new plans for security cooperation via the "Quad"—consisting of the United States, Japan, Australia, and India—but substantive follow-through has been relatively limited. A recent Australian Strategic Policy Institute study found that 57 percent of ASEAN respondents supported the Quad initiative as useful for regional security, only 10 percent opposed it, and 39 percent stipulated that they would support it if it successfully materializes. The numbers climb higher when the issues get more specific, with 69 percent supporting Quad efforts to enforce the rules-based order in places such as the South China Sea. Here, as in other areas, the demand signal from the region clearly demonstrates that there is room for further initiative and action.

In short, the administration has taken several steps that, if they come to full fruition, would certainly strengthen the U.S. defense profile in Asia—but progress toward that goal has been only partial at best. And time is of the essence since, as the National Defense Strategy Commission warned last week, “America’s military superiority—the hard-power backbone of its global influence and national security—has eroded to a dangerous degree.”

One of the most striking features of recent Chinese diplomacy has been the confidence with which China has presented itself as an alternative model for countries in Asia and around the world seeking a path to growth and development. Xi Jinping said at the Nineteenth Party Congress of the Chinese Communist Party in 2017 that China "offers a new option for other countries and nations who want to speed up their development while preserving their independence." Pointing to the long-standing history of American advocacy for the liberal concepts of democracy and human rights, Beijing emphasizes that its foreign policy is not grounded in either Western values or morality. The proposition is clear, if implicit: American foreign policy, inextricably linked to its values, will always attempt to impose itself on others; China's claimed policy of respect for sovereignty promises non-interference in the internal affairs of other nations. No matter that its actions often undercut this promise, China is proposing a different model.

At the same time, the continuing fallout from the U.S. invasion of Iraq, the 2008 financial crisis, and the division and dysfunction of the Trump era have dented the attractiveness and influence of the American model of governance. The drop-off has been particularly striking with the advent of the Trump administration. According to the 2018 Pew Global Attitudes Survey, favorable views of the United States declined from 64 percent at the end of the Obama presidency to 50 percent two years into Trump's presidency. Confidence in the U.S. president dropped from 64 percent for Obama to 27 percent for Trump. One might think that this decline in U.S. popularity and soft power might have created an opening for China to exploit. However, it is striking that confidence in Xi Jinping is not significantly higher at only 34 percent globally.

What the data suggest is that while there may be widespread admiration for China’s economic model, there is also notable distrust of Beijing’s political intentions. As interest in Chinese investment has grown, so too have concerns about Beijing’s efforts to exert political intimidation and create economic dependencies. At this year’s Pacific Island Forum, Nauru’s President expressed dismay that a Chinese official had tried to silence other attendees: “maybe because he was from a big country he wanted to bully us,” he told the press. Such concerns can be heard globally, with Namibia’s president recently rebuking the Chinese Ambassador, “You should not tell us what we should do. We are not puppets.” Moreover, as more becomes known about the extent of China’s internal repression, particularly against the Uyghur people in Xinjiang, and its external interference in the domestic affairs of other countries, the Chinese model is beginning to encounter increasing resistance throughout Asia.