A Nuclear Armed Germany Would Be a Mistake 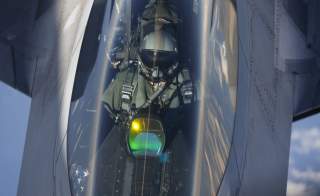 In German post-war mythology, the Federal Republic’s first chancellor Konrad Adenauer is synonymous with Western Integration and unshakeable trust in America. Yet, if push came to shove, he did not want to have to trust in U.S. nuclear protection. Thus, in a cabinet meeting in December 1956, he called for the Bundeswehr to equip with nuclear weapons—either through own efforts, ideally with the French and Italians, if necessary, in secret by deliberately leaving America in the dark. The ‘Paris Agreements of 1954’, where Germany agreed not to manufacture atomic weapons wouldn’t be much of an obstacle, French Defence Minister Jacque Chaban-Delmas declared. The prohibition of atomic weapons would only concern German state territory. Therefore, why not jointly produce them in France?

During the 1950s, Adenauer and his Minister of Defence Franz Josef Strauss noticed rapid changes in the security environment. In the Summer of 1956, rumors emerged that the British planned to shift much of its military capability from Germany to the Middle East. Also, it was reported that the United States would soon announce an 800,000-men cut in its forces, making Europe an easy target for Soviet aggression. Why not use atomic weapons to halt the Red Army rather than drench the battlefield of Central Europe with American blood? According to U.S. Admiral Radford, this would not only be less costly but pretty much make up for the loss of conventional deterrence capabilities. If this wasn’t enough for Germans to bear, there was the Sputnik-Crisis of October 1957. Now the U.S. homeland was within reach of Russian nuclear missiles—America’s age of invulnerability was coming to an end.

Would Americans defend Western Europe at the price of nuclear extermination? Did decision-makers in Washington value Bonn and Berlin as much as New York or Boston? Where would the defense be deployed—on the inner-German border, the Rhine riverside, in North Africa? Wouldn’t the United States try to limit a nuclear war to Germany to protect American soil, try to win a scaled-down nuclear exchange with the Soviets at the expense of the federal republic, not least to save a great amount of blood and treasure? Understandably, Adenauer didn’t want to go down that road. A ‘Bonn bomb,’ therefore would be the avenue of escape. And the window of opportunity seemed to be there. After all, Paris felt humiliated by Washington during the Suez Canal Crisis, was short of money and—at that period of history—did not possess the bomb. Though, why not join hands with the old hereditary enemy on the other side of the Rhine?

The idea never transformed into reality. The Algerian War and De Gaulle got in the way. France became a nuclear power on its own. Germany was ‘compensated’ with the ‘nuclear sharing agreement,’ was from now on involved in the North Atlantic Treaty Organization’s nuclear planning and in ‘warhead delivery’ in the event of their use. Strauss’ option about this is recorded in his memoirs: ‘The little puppet was allowed to run alongside the military band with his toy trumpet, believing he was the drum major.’ The German Foreign Office, however, breathed a sigh of relief—catastrophic political consequences had been averted, for the moment.

Now, almost six decades later, Brooking’s Constanze Stelzenmueller, claims that Germany is facing ‘its worst security dilemma since the 1950s’. In the West, Donald Trump insists on ‘peace (only) through strength,’ on ‘unmatched American power,’ including a pre-eminence in nuclear capabilities. In the East, Vladimir Putin has announced ‘revolutionary weapons systems’ capable of out-maneuvering any defense and delivering nuclear warheads to every corner of the globe. And Germany lies in-between.

Today as then, Western solidarity is under considerable strain. This time, nuclear Great Britain is not only ordering its troops home but leaving the European Union, while France continues to think of the ‘Force de frappe’ as a national tool first. And on top of everything, the steadiness of NATO’s Article 5 guarantee is called into question, again. The country to be blamed for this, if voices out of the Trump administration are to be believed, is first and foremost mine: Germany, who is said to spend way too little on defense and to occasionally make common cause with Moscow—on Nord Stream 2 and beyond. Additionally, arms control and (nuclear) non-proliferation regime(s) are in severe trouble while nuclear weapons states are modernizing their arsenals. Similar to ‘Atomic Annie’ of 1953, an artillery cannon capable of delivering nuclear grenades up to twenty miles into enemy territory, today low-yield, high-precision nuclear weapons are planned to lower the deployment threshold, thus hardening ‘soft spots’ in defense and deterrence.

To make matters worse, the United States, China, and Russia are developing ‘hypersonic gliders’ of such speed (Mach 5 or more) that any effective response becomes next to impossible. As a result, in the future, most of the world’s nuclear arsenals might be rendered highly vulnerable to attack. When Trump then further announces a ‘space force’ and it becomes clear that early warning systems are constantly hackable via cyberspace, the Cold War doctrine of ‘mutually assured destruction,’ the belief ‘whoever shoots first dies second’ almost sounds reassuring and stabilizing.

A world, worse off than in 1957? Hasn’t the international system reached a ‘point of no return’ requiring nuclear weapons for state survival? How should Germany protect itself in this ‘New World Order’ if it can’t rely on anyone else? Aren’t tactical atomic weapons, as Adenauer emphasized back then, ‘basically nothing but the further development of artillery,’ anyway? This time it’s for real—German needs to go nuclear, alone! This is what Christian Hacke, a well-known German political scientist, and realist advocated for in ‘Die Welt/EN.'

But then what? First, Germany’s plan to shut all its nuclear reactors by 2022, a decision taken after the Fukushima accident in 2011, has to be revoked. Thereafter, nuclear bombs could be technically built: URENCO has already made Germany one of the world's leaders in uranium enrichment. Strategically, things would be more difficult: When would the bombs be used, for and against whom? How would they be carried to the target? On land, on water, on air? Would tactical nuclear weapons be fabricated to be able to react flexibly and gradually, i.e., to a limited nuclear strike on an aircraft carrier in the Baltics? How about a German one that might almost certainly be already on patrol the ocean in this scenario? How would a German government balance lives and cities against each other? Would (and should) it be in its power to sacrifice Berlin for Warsaw or vice versa? Who would accept a value judgment like that?

These are scary questions, especially for a German audience. However, nuclear weapons states ask and answer them all the time. To be aware of their existence is thus of utter importance, not due to agreeing to their rightness and necessity, but for mutual understanding and alliance cohesion.

The prior discussion can only lead to one conclusion: A Germany armed with nuclear bombs would be a fatal signal and jarring break with a hard-won post-war identity, which includes renouncing weapons of mass destruction. It would put the ‘German question’ back on the international agenda. Not just any country would have chosen to acquire nuclear weapons and thus take another shot for ‘single-hegemony’ in Europe, but one whose recent austerity and migration policies weren’t praised by anyone, to say the least.

A German nuclear bomb must be prevented, today as in 1957. Far less provocative steps beyond the atomic threshold are possible: from strengthening conventional deterrence capabilities to promoting dialogue with European and other partners about the meaning and achievability of strategic stability in the twenty-first century. Reviving efforts for arms control and disarmament would be a viable supplement. All these steps are not a magic bullet. But neither is a German bomb.

If the Federal Republic would go nuclear, as Wolfgang Ischinger, Chairman of the Munich Security Conference, recently stated, it would not only ‘checkmate itself’ but also NATO and the process of European unification. In short—the country would hurt itself and facilitate balance-of-power dynamics to counter and tame its aspirations. A new age of unstable multipolarity on the continent would be the result. Especially realists like Hacked, who are always demanding a foreign policy to be based on self-interest and power, should know better—the atomic bomb is not in the German national interest.

Konrad Adenauer described the Nuclear-Non-Proliferation Treaty in 1967 as ‘Morgenthau Plan squared.' Strauss referred to it as a ‘Versailles of cosmic proportions.’ Both men had little value for movements like ‘Combating Nuclear Death’ uniting representatives of churches, trade unions and the Social Democratic opposition. Nor did they heed warnings about the dangers of nuclear war presented by eighteen leading German atomic scientists in their ‘Göttingen Manifesto’ of 1957. Adenauer continued to believe that Germany needed a nuclear option until the day he died. This view was deadly then and still is today.