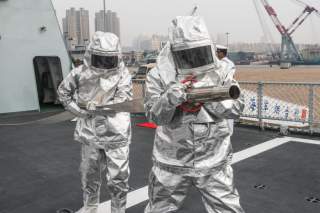 Observers have been particularly puzzled to understand why the United States considers the Islamic Republic of Iran a threat and why, therefore, it is unlikely to give up its quest to stop Iran from acquiring nuclear weapons.

There has been enormous debate among scholars that the reaction of the United States—as one of the guardians of the Non-Proliferation Treaty (NPT)—to Iran’s weaponization efforts and its breaking of the NPT rules has been entirely different from its approach to other proliferators, Pakistan in particular. On May 28, 1998, Pakistan’s long-suspected work on nuclear weapons, revealed by five simultaneous underground nuclear-weapons tests, introduced a new element of volatility into the region. However, regardless of some modest criticism and short-lived sanctions imposed by the U.S. Congress, Pakistan’s proliferation was almost universally accepted. In contrast, Iran’s effort to acquire nuclear weapons triggered tremendous anxiety and unprecedented efforts by Washington to roll it back.

This article posits that a number of factors were the source of these differences. First, and on a theoretical level, the debate in Washington addressed the question of whether rogue countries like Iran are rational enough to be trusted with nuclear weapons.

Pakistan was never considered an “irrational” and “messianic” state like Iran, but regarded as a country with a certain degree of Cold War–type nuclear rationality. Unlike the Pakistani case, many analysts and policymakers have questioned Iran’s rationality, and the reliability of deterrence in the case of the Iranian leadership. They warn that the regime operates in a manner that deviates from the principles of rationality that underlay nuclear deterrence, which guided the leaders of the United States and the Soviet Union during the Cold War, thus rendering the Mutual Assured Destruction doctrine invalid.

According to these analysts, the Iranians are an “apocalyptic,” “crazy” or “messianic regime,” and one cannot “bet on their rationality.” Consequently, nuclear weapons in the hands of “irrational” Iranian leaders would pose a major threat to the interests of the United States and its allies, including Israel. A nuclear-armed Iran, they argue, would be dangerous even if its leadership were entirely rational, because “after all, miscalculation, or errors in information, could still lead a perfectly rational adversary to strike first.”

The second level of debate which is also theoretical pertains to the consequences of proliferation, which is what happens when neighboring countries that feel threatened proceed to develop their own arsenal, which increases the probability of either a planned or unplanned nuclear exchange. U.S. policymakers deemed that Iran’s acquisition of a nuclear weapon would produce a nuclear arms race in the Middle East, the world’s most volatile region. It’s a logical concern as, for instance, the Saudis have already explicitly stated that they will examine a military nuclear option if Iran crosses the nuclear threshold, because they will not tolerate a situation where Iran is armed with a nuclear weapon and they are not. It was confirmed by Prince Turki al-Faisal, the former Saudi intelligence chief, who noted that due to its deep mistrust and direct competition with Iran, Saudi Arabia views the advanced nuclear capabilities of Iran as a threat, to the extent that Riyadh may need to respond in kind by building equivalent enrichment capabilities to the precise levels that the Iranians are allowed, hedging against the possibility of an Iran armed with nuclear weapons.

Equally important, Egypt is another one of the regional countries that is often named as a state that may respond in kind to Iran’s nuclear breakout. Although Cairo has been more prudent than Saudi Arabia and Israel in raising the alarm over the risks of Iran’s nuclear program, it nevertheless fears the impact of Iran’s weaponization on its security and interests. Cairo’s profound mistrust of Iran’s nuclear ambitions means that it could seek to follow suit by building its own nuclear weapons. As Nabil Fahmy, a high-ranking Egyptian diplomat, has noted, if “ultimately Iran develops what is seen at least by some as a latent nuclear weapons capability,” Egypt would naturally react. “If [Egypt] feels threatened, it is legally obliged to pursue measures to ensure its national security.”

For the time being, the United States has extended a de facto nuclear umbrella protection to its allies in the region, because of the importance of their oil to the world economy. This is not an official position but, from what we understand, unofficial assurances have been given to these countries. However, with Iran’s weaponization, countries in the region may question the reliability of American security guarantees.

The third level of analysis is less theoretical but no less important, and deals with a different way in which Iran’s potential nuclear arsenal can be a threat. Iran is alleged to be a leading terror state that may be tempted to give some nuclear material to one of its proxy terror groups or extremists. This may not be an official decision, but since Iran has many factions, it may be the decision of a faction with access to nuclear material. The realization that Iran has evolved a uniquely negotiated political order in which state agents compete for power with the office of the supreme leader, and powerful groups such as the Revolutionary Guard and other factions work at cross purposes, has empowered critics of unitary-actor rationality.

On the issue of use of terror, with a nuclear-armed Iran, U.S. policymakers and strategists believe that the United States will lose its deterrence power because it would not be able to retaliate against a nuclear-armed Iran as it did, for instance, during Operation Praying Mantis in the last year of the Iran-Iraq war. To recall, on April 14, 1988, in what was the largest naval engagement since World War II, U.S. forces sank two Iranian warships and three armed speedboats and attacked offshore rigs, in retaliation for Iran’s mining of the Persian Gulf and the subsequent damage to an American warship.

A nuclear-armed Iran, as seen by U.S. officials, would be more assertive than it is now in trying to influence the policies of regional states, and in supporting groups in the Middle East and elsewhere that oppose U.S. interests. As far as U.S. policymakers are concerned, deterring a nuclear-armed Iran requires a far larger military presence in the Middle East and major investments in missile defense capability, as well as a modernized nuclear arsenal.

None of these theoretical issues are clear-cut, but at the applied level, when decisionmakers consider the facts, they tend to bring the country’s historical experience to the decision. America’s personal history with Iran, starting with the embassy hostage-taking in 1979 and multiple terror attacks on American interests and allies in the region, adds to the theoretical concerns. When the new regime came to power in 1979 in Tehran, it declared Islamic war against the United States and the slogan most favored by the revolutionaries, “Death to the Great Satan, America,” became the universal language of Islamic insurgency. On November 4, 1979, Iranian radical Khomeinists stormed the U.S. embassy in Tehran and took all American diplomats and employees captive for 444 days.

The hostage-taking was followed by the kidnapping of American citizens through its proxies in the region, among them Hezbollah in Lebanon. Between 1982 and 1992, during the ten-year-long Lebanese hostage crisis, thirty Americans, among them CIA station chief William Buckley, were kidnapped. Additionally, since the revolution the regime has been funding, providing equipment, weapons, training and giving sanctuary to terror organizations. In fact, terrorism has served as a weapon in Iran’s struggle against American presence in the Middle East.

Iran said to be responsible for numerous terror plots, through its agents (the Quds Force) or its proxies Hezbollah and Hamas. For instance, the Revolutionary Guard is believed to have had a key role in the bombing of the U.S. Marine barracks in Beirut in 1983, which killed 241 American soldiers. The intelligence community believe that Hezbollah, likely with the support of the Iranian regime, carried out the Khobar Towers attack in Dhahran, Saudi Arabia in 1996 that killed and wounded a large number of U.S. servicemen. According to the testimony of Bruce Tefft, a former CIA official, the attack was planned and directed by the Revolutionary Guard and Iran’s Ministry of Intelligence and Security, “acting on the orders of the Supreme Leader of Iran.” Moreover, a set of classified documents released by WikiLeaks in July 2010 indicated that since 2001, numerous attacks on coalition forces in Iraq and U.S. troops in Afghanistan have been attributed to the Revolutionary Guard and Iranian-made weapons in addition to Iran’s extensive collaboration with the Taliban and Al Qaeda.

According to Western intelligence analysts, despite being on opposite ends of the religious and ideological spectrum, Iran supports Al Qaeda terrorists as a way to leverage Al Qaeda against U.S. interests. As explained by the 9/11 Commission Report, senior Al Qaeda members maintained close relations with Iranian security officials and frequently traveled to Iran in the months prior to the attacks, although it is not confirmed whether it was informal or officially sanctioned cooperation. A similar report by the nonpartisan Congressional Research Service claims that almost twenty members of bin Laden’s family have lived in Iran since 9/11, while his son Saad bin Laden and several advisors and high ranking Al Qaeda members have been able to travel Iran frequently.