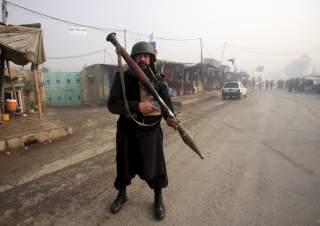 The preliminary official results of the July 25 elections for the Pakistan parliament have now been announced. The Pakistan Tehreek-i-Insaf (PTI) led by former cricket star Imran Khan has emerged as the largest party with 115 seats, the Pakistan Muslim League–Nawaz (PML-N), the former ruling party, has come second with 64 seats, and the late Benazir Bhutto’s Pakistan People’s Party (PPP) third with 43 seats, almost all of them from its traditional stronghold of Sindh. The PTI, while 22 seats short of a clear majority, is certain to form the government with the help of independents, who have won 13 seats, and some smaller parties.

However, the real winner in these elections is the military high command. To quote the Economist, “This time the soldiers have in their sights their ideal outcome: a pliable leader and a minority government that will not be too powerful.” Imran Khan was the clear favorite of the military in the run up to the elections and reports suggest that the electoral process was manipulated by the army in order to bring about the desired result.

Traditionally, the military top brass has acted as the kingmaker in Pakistan when it has not held power directly. The role played by the military in influencing the elections became evident from the fact that several heavy weights among the PTI’s opponents, especially leaders of the Pakistan Muslim League Nawaz (PML-N), were either disqualified or imprisoned in the period immediately preceding the elections. Most important, former Prime Minister Nawaz Sharif was removed in a military-engineered “soft coup” by a pliant Supreme Court on July 28, 2017, on the vague charge that he was “not honest and reliable enough” to hold office. He was then swiftly tried, convicted and imprisoned for ten years for illegally owning property abroad—a common enough practice among Pakistan’s political leaders of all hues. The aim was to debar the charismatic Sharif, the PML-N’s star campaigner, from contesting the elections and from campaigning for his party’s candidates as well as to frighten his leading supporters and force them either to defect to the PTI or withdraw from the fray.

Although Sharif had started his political career under the tutelage of military dictator Zia-ul-Haq, his independent streak particularly on foreign policy and security issues had made him a thorn in the army’s flesh. He had been removed from power once before in 1999 by General Pervez Musharraf but returned to office in 2013 after defeating the Zardari-led PPP (the party of assassinated former Prime Minister Benazir Bhutto) that had come to power after Musharraf resigned in 2008 to avoid impeachment.

What the military resented most was Sharif’s relatively soft line toward archrival India and his repeated calls that those Pakistani extremists involved in the terrorist attack on Mumbai in November 2008 be brought to justice by the Pakistani courts. In particular, his comment in May 2018 that “Militant organisations are active [in Pakistan]. Call them non-state actors, should we allow them to cross the border and kill 150 people in Mumbai?” irked the military—which has supported some of the terrorist organizations—to no end.

The slow pace with which election results were declared was blamed by the authorities on a software meltdown. However, the delay further fueled allegations of fraud by the military. It was interpreted as a strong indicator that the Election Commission had to wait for the “deep state” to approve (or alter) the results before announcing them. The defeat of several stalwarts of both the PML-N and the PPP, including Bilawal Bhutto Zardari, the son of Benazir Bhutto and Co-Chairman of the PPP, in their own strongholds has also been attributed to the military’s interference in the electoral process.

It is now clear that the PTI, while the single largest party, will fall short of a clear majority by 22 seats, thus producing a hung parliament and forcing Imran Khan to form a coalition government, a suggestion he had resisted during his election campaign. He seems to have changed his mind after the elections and has already begun to conduct negotiations with some of the smaller parties and independents. A coalition government led by Imran Khan is tailor made to serve the military’s interests. It will provide the military brass with a pliable prime minister of its choice. At the same time it will make Imran Khan, who is somewhat of a maverick and is accused of having links with Islamist extremists, almost totally dependent upon the military’s good will to remain in office. This will be the case because he will be forced to rely on independents and on one or more of the smaller parties, who are more easily susceptible to the military’s influence, to retain power.

This suits the military admirably. In the words of Hussain Haqqani, Pakistan’s former ambassador to the United States, “The Pakistani military obviously wants a civilian facade in the form of an elected government that follows dictates on policy toward India, Afghanistan, jihadi terrorism and relations with China and the U.S. It does not want a genuinely popular civilian politician in power, backed by an electoral mandate, and certainly not one that might alter the country’s trajectory.” Imran Khan, the playboy cricketer turned pious Muslim, obviously fits the bill.

The other constituency that prefers Imran Khan to his opponents are the very vocal Islamist groups, both violent and non-violent, agitating for the most antediluvian laws—including the strict enforcement of blasphemy law and “hudood” punishments calling for stoning to death of adulterers and cutting off the hands of thieves. Imran Khan, whose earlier lifestyle—including dalliance with several women and reports of having fathered a child in the United States out of wedlock—would have made him a perfect target for punishment under hudood laws, now projects himself as an ardent advocate of those very same laws calling for their strict enforcement.

As a consequence of his reinvention as a born again Muslim and his recent third marriage to a burqa-clad woman who apparently doubles as his spiritual mentor, Imran Khan has endeared himself to conservative Muslims regardless of their party affiliations. Consequently, he now has the backing of the two strongest political institutions in Pakistan—the military and the mosque. This makes his position, at least in the short term, quite secure.

The million dollar question that now arises is how he and his military backers will resolve the contentious issues that divide them. Chief among these is their approach to the United States, which Imran Khan has repeatedly attacked ferociously for Washington’s military operations in Afghanistan and along Pakistan’s border with that country. Additionally, he has been hobnobbing with terrorist groups and condemning American drone attacks against the Taliban and other extremist factions such as the Haqqani network that are engaged in attacking American forces in Afghanistan from their safe havens in Pakistan. This stance plays well with his conservative base in the Pakhtunkhwa province bordering Afghanistan, which is populated largely by ethnic Pashtuns—many of whom sympathize with the Taliban.

The army, on the other hand, has a more nuanced view of Pakistan’s relations with the United States. On the one hand, it has tried to extend support to terrorist groups in Afghanistan and within Pakistan in order to use them in Indian-administered Kashmir when required and to destabilize Afghanistan when its suits its interests.  At the same time, the military is interested in maintaining decent working relations with Washington because of Pakistan’s dependence on the United States for sophisticated weapons necessary to neutralize to some extent India’s superiority in conventional weaponry. This is the reason why the Pakistan military has been very measured in its response even in the face of provocative statements by President Donald Trump earlier this year freezing arms supplies to Pakistan because of the latter’s continued support to anti-American elements engaged in attacking American forces in Afghanistan.

As far as Pakistan-American relations are concerned, Imran Khan’s dependence on the army can be expected to force him to act more responsibly and against his visceral anti-American instincts and in support of terrorist factions. Khan is likely to continue to indulge occasionally in his hyperbolic anti-American statements but will not attempt to rock the boat in any major way. Given his chameleon-like character, he can be expected to act according to the military’s script most of the time.

Pakistan’s security and foreign policies have always been the military’s preserve with civilian governments provided very little leeway to make any major changes to them. As stated earlier, one of the main reasons why the military decided to remove Sharif was because he attempted to deviate from this tradition. Imran Khan, dependent upon the military for his political survival, is unlikely to challenge the established pattern of civil-military relations in the sphere of foreign policy as well as in most other arenas.

Mohammed Ayoob is University Distinguished Professor Emeritus of International Relations, Michigan State University, and Senior Fellow, Center for Global Policy. His books include The Many Faces of Political Islam (University of Michigan Press, 2008) and, most recently, Will the Middle East Implode (2014) and editor of Assessing the War on Terror (2013).