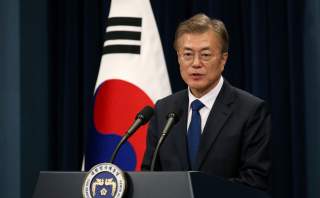 This week’s South Korean presidential election has ignited concern about the U.S.–South Korean alliance. A liberal, Moon Jae-in, has won the South Korean presidency. President Moon has a long track record advocating engagement with North Korea. U.S. president Donald Trump—to the extent that he has a fixed North Korea policy—is a hawk. He has used far more belligerent language to address the North than previous American administrations. And there is a general ideological gap between them: Moon is a social democrat, while Trump appears to be jettisoning his populism in favor of traditional Reaganism.

Moon and Trump are also quite different characters. Moon is a buttoned-up, serious policy wonk with a long history of political engagement. His views are broadly known and fairly stable. Trump, by contrast, is flamboyant, amateurish and prone to dramatic policy swings. It is easy to see these two falling out—indeed, perhaps loathing one another. In character and policy, they are about as far apart as one can be within the realm of democratic politics.

There is precedent, however, for this wide diversion between the allies’ heads of state. South Korea’s last liberal president, Roh Moo-hyun, governed at the same time as Republican U.S. president George W. Bush. There were persistent rumors that the two disliked each other, and that Roh particularly disdained Secretary of Defense Donald Rumsfeld. Then too, personality and ideological cleavages overlapped, making summitry and alliance management challenging. In the late 1970s, military dictator Park Chung-hee clashed badly with President Jimmy Carter and his early emphasis on human rights. At that time, there were widely shared stories that Carter hated Park.

Alliance proponents retort that the U.S.–South Korea alliance goes beyond such personality distinctions. It has decades of history behind it, including a shared military conflict: the original Korean War. The U.S. and South Korean militaries are deeply interwoven (rather than stovepiped, as in Japan). There is a strong consensus in the government bureaucracies of both partners in favor of alignment, too. Military and diplomatic officials from each country routinely fly into the other’s capital and talk about the strength of the alliance, its depth and reach, its shared values, and so on. There is also a cottage industry of think tanks, study centers, NGOs and the like providing extensive track 1.5 and track 2 support for the relationship.

Indeed, so deep and liquid is the sub-elected level of the relationship that it almost neuters democratic control. Both Trump and Moon were elected. Both have expressed dissatisfaction with the alliance’s character. Trump has suggested that South Korea is free-riding and should pay for U.S. missile defense in-country. Moon has talked of a “Korea that can say ‘no’” to the United States. But both would likely encounter massive bureaucratic resistance if they pushed these themes hard. As decades of previous ups and downs have suggested, the alliance is actually quite durable in the face of policymaker variation.

So it is an easy prediction that the alliance will pull through. Its roots are deep. Moon is a garden-variety social democrat, hardly the communist subversive conservatives are making him out to be. And Trump is increasingly discounted. He may talk and behave outlandishly, but world leaders are learning to simply ignore his antics. Still, there remain two immediately divisive alliance issues. While known quantity Moon is unlikely to surprise on them, Trump’s penchant for erratic Twitter outbursts might well ignite one of these otherwise manageable concerns:

1. Missile Defense: The U.S. THAAD (Terminal High Altitude Area Defense) missile defense system is now in Korea. The United States pushed hard for its installation, and South Korean conservatives supported deployment. Moon has prevaricated over this. His dovish party dislikes it; they claim it pointlessly provokes North Korea and China, and is unnecessary. Moon personally would probably like to remove the system, but as I have argued in these pages before, THAAD has now acquired a political symbolism that exceeds its military function. China has publicly bullied South Korea over THAAD, demanding that it be withdrawn. For South Korea to expel THAAD now, under Chinese threat, would suggest that China has a veto over South Korean national-security decisions. No president, not even on the left, can afford the perception of knuckling under to China. Moon will therefore likely retain THAAD—unless Trump continues to insist on . . .

2. Free-Riding: Trump has brought the issue of allied burden-sharing from the fringe of the U.S. alliance debate to its heart. On THAAD, he has suggested that South Korea pay for it, even though the original agreement charges the United States with that. The system is pricey—$1 billion—and South Koreans claim it is firstly intended to shield U.S. forces in-country, so they should not have to pay for it. On the other hand, South Korea only spends 2.6 percent of GDP on defense, even though without the U.S. alliance it would likely spend three times that. There is a case for U.S. allies, including South Korea, to do more. But if Trump frames THAAD as a zero-sum fight over dollars spent—as he apparently did with Angela Merkel—rather than as positive-sum cooperation to improve interoperability and alliance depth, he may well energize the South Korean Left’s nationalism enough to eject THAAD.

Other medium-term issues will inevitably arise. If Moon’s government takes a hard line with Japan over historical questions, it will roll back nearly a decade of progress and infuriate the U.S. side, which has sought to contain these issues for a long time. Similarly, if Moon actually goes to Pyongyang, as he threatened to do in his very first public speech as president, he will meet a wall of resistance from the American diplomatic side where there is now a consensus that North Korea is a global public menace that will not honor its contracts.

In short, tensions are there, but they can be overcome. The alliance has seen heads of state with widely varying preferences before. Perhaps the greatest wild card this time is Trump himself. His penchant for norm breaking and theatrical shenanigans could magnify otherwise controllable issues into a nasty breach. This is still unlikely to end the alliance, but perhaps the few remaining U.S. forces in Korea would be withdrawn as a result. Nevertheless, if Trump can keep his tweeting and outbursts under control, the coming rough patch should be manageable.