The Path Forward in Iraq: What Robert A. Pape Thinks 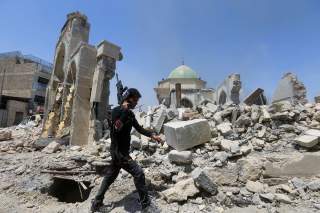 Editor’s Note: This is a submitted response to the National Interest’s symposium on Iraq after sixteen years of war. Check out all the responses we gathered here.

The United States invasion of Iraq in 2003 is America’s biggest foreign policy disaster since the Vietnam War. None of the stated goals—preventing weapons of mass destruction, spreading stable democracies, enhancing regional stability, and reducing terrorism—were achieved.

Worse, 4,500 Americans have died and 32,000 have been wounded in Iraq since 2003, more than died on the September 11, 2001 terrorist attacks. Over 110,000 Iraqis have died as a direct result of the rounds of civil war that the U.S. invasion engendered. Syria has suffered major spillover effects, contributing to major chaos inside that country. Iran and Saudi Arabia are engaged in a proxy war in Yemen that may well never have happened.

Worst of all, the 2003 Iraq war has triggered a massive wave of terrorism—especially the most deadly form, suicide terrorism. Prior to the U.S. invasion of Iraq in March 2003, Iraq never experienced an instance of suicide terrorism in its history. Once the United States invaded, suicide attacks began almost immediately and Iraq has since suffered the greatest number of suicide attacks of any country in the world—2,394 as of early 2019—killing over 24,000, including many American and Western soldiers and civilians. With ISIS, these attacks have escalated to the West.

The suicide terrorist attacks in Iraq are a direct result of the U.S. invasion and occupation of Iraq.  Al Qaeda in Iraq (AQI)—a Sunni terrorist group—was principally responsible for the suicide attacks, which gathered momentum after highly prominent attacks in 2003 against United Nations and other targets associated with the U.S.-empowered Shia government. According to AQI’s original leader Abu Musab al-Zarqawi, these targets were “the eye, ear and hand” of the American occupier and attacked the true long-term enemy, the new Shia government.  The “Islamic State” is a straight-line descendant of AQI.

Here is the big picture: the U.S. invasion of Iraq created an enduring Sunni insurgency, as a response to the occupation of the Sunni areas by both U.S. troops and the occupation by the new Shia government empowered by the United States. For the Sunnis, suicide terrorism is their response to both occupations.

Thus, simply withdrawing U.S. and Western troops is insufficient to stop the wave of suicide terrorism. In Vietnam, the United States could simply walk away and the negative consequences largely subsided. But, the 2003 Iraq invasion created enduring terrorism that will continue until Iraq’s Sunnis have genuine political, economic and social self-determination—the tragic price of folly in March 2003.

Robert A. Pape is professor of Political Science and director of the University of Chicago Project on Security and Threats.  He is the author of Dying to Win:  The Strategic Logic of Suicide Terrorism (2005) and Cutting the Fuse: the Global Explosion of Suicide Terrorism and How to Stop It (2010).