Peace By Poison: How the Coronavirus Could Fix Globalization Problems 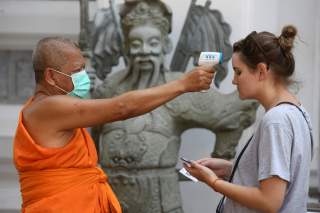 The coronavirus pandemic is stress-testing a global system that was already beginning to crack. In what my students at the Naval War College have termed the condition of "fractured globalization,” the virus, Covid-19, is accelerating a series of disintegrative processes, which could end up ushering in the long-awaited post–Cold War world.

After the fall of the Soviet Union, the gamble that guided U.S. foreign policy was that setting up a series of global supply chains with easy access to the American market would create communities of interest that would decrease conflicts and increase the attractiveness of adhering to the rules of the U.S.-led international order while the lowering of barriers would increase prosperity for all. The political bargain to both domestic populations and to countries around the world was that the "winners" of globalization would find ways to compensate the "losers” and the end result would be a peaceful, integrated world comprised of an international community.

This paradigm guided its most well-known application, which was a strategic approach to China designed to channel its rise in the direction of becoming a responsible stakeholder. It was also reflected in a variety of initiatives designed to enmesh and interconnect peoples around the world. To buttress the Egyptian and Jordanian peace deals with Israel, for instance, special zones were created where raw materials and components could be produced or amplified then sent to Israel for value-added upgrades. Afterwards, they would be imported to the United States as if they were domestically-produced goods. For two decades, the United States has hoped that an energy corridor from Turkmenistan through Afghanistan to Pakistan and India could generate support for peace. The culmination was supposed to have been the Trans-Pacific Partnership and the Transatlantic Trade and Investment Partnership, which would have created two broad free trade zones with the United States as the central keystone.

But this future has been interrupted by a series of trends. The first has been the growing political clout of the self-described “losers” of globalization, as manifested in both right- and left-wing populist movements in all the industrial democracies of the West. Borders and protectionism have staged comebacks in a supposedly borderless world of the twenty-first century as citizens of sovereign states seek barriers against the arrival of outsiders and of outside goods and services. The second is China's ability to rework the rules of the post–Cold War world to its advantage rather than taking up the role of America’s understudy. In embracing the benefits of the U.S.-led international system, Beijing has not correspondingly evolved its domestic forms of governance or its foreign policy along lines preferred by Washington. Americans today feel less secure and more vulnerable, in part because they have lost faith in globalization. Some of that is due to the narrative collapse on the part of U.S. political leaders, to be sure, but some of it also comes from the vulnerabilities of globalization itself.

Fifteen years ago, Barry Lynn warned about "trade utopianism" guiding U.S. strategic thinking, that it would be impossible for rising or resurging challengers to oppose the United States without risking their prosperity. Moreover, he charted the very real risks of having a good pass through dozens of countries from its raw material stage to the final product on a series of elongated and vulnerable supply chains that were liable to be disrupted by natural disasters or political machinations and become dependent on those chains for vital goods. Andrew Michta has charted the results of what he terms the “radical centralization of market networks,”

a system in which a single point of failure can disrupt the manufacturing of consumer goods. Apple’s recent difficulties with Foxconn and iPhone manufacturing are just the tip of the iceberg. China accounts for the vast majority of production of rare earth elements, which are vital to consumer electronics. Eighty percent of key ingredients for U.S. brand-name and generic drugs come from abroad, mostly from India and China.

We have a situation where a vital item may end up being bottlenecked at any point along a long chain: a natural disaster at the raw material source; pirate activity in a critical sea lane of communication; imposition of sanctions at some midpoint in the process; a collapse at an important infrastructure node. When the item is an out-of-season fruit, that may be an inconvenience; when it is surgical gloves and masks equipment or a machine part that cannot be sourced from any other location, then it becomes a problem. It may have been cheaper in the short-term to centralize production of medical equipment in China, but what happens when Beijing decides to stop exports either to meet domestic needs or to wield political pressure?

There is, of course, the possibility of a massive overreaction: to declare globalization has “failed” and to try to pursue some unrealistic vision of economic autarky. There are many benefits from globalization that Americans and others around the world have reaped over the past thirty years. But it has been the decoupling of economic dependence from security relationships that has created instability and needs to be rethought.

The polling data is clear: most Americans reject isolationism. However, there have been signs that Americans want to focus on domestic economic, industrial and technological renewal and regeneration and to partially pull back from “the world” as a whole—particularly from economic dependence on China—and focus instead on strengthening economic and security relationships with partner states that share values and similar outlooks with the United States.

This is why the concept of “fractured globalization” is so intriguing. Perhaps stepping back to more compact partnerships, reducing the length and vulnerability of supply chains, and creating alternate sources of supply for everything from energy to electronics that do not require dependence on the revisionist powers will become the defining motif of the 2020s. Rep. Michael Gallagher’s (R-Wis.) proposal for using the U.S.-UK relationship as the basis for a new trading and economic agreement is an interesting effort that reflects this type of thinking. The coronavirus situation is opening the door to consider how globalization may end up being mended rather than ended.

Nikolas K. Gvosdev is the Captain Jerome E. Levy professor of economic geography and national security at the U.S. Naval War College, and a senior fellow at the Foreign Policy Research Institute. The views here are his own.