Is Peace in Syria Finally Within Reach? 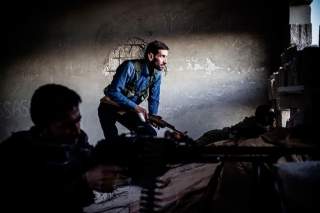 The recent ISIS-inspired and/or contrived terror attacks in Istanbul, Baghdad, Al Qaa (Lebanon), Mecca and Dhaka graphically reflect both the bestiality and the long reach of the Salafi-jihadi organization. To many observers, ISIS, despite losing ground in Iraq and Syria, has been expanding its power across continents. True, ISIS has been diligent in expanding and projecting its terror network beyond its self-proclaimed border in the Levant; nevertheless, ISIS is facing a newly configurational development in Syria that could bring an end to its capital in Raqqa. Significantly, this new configuration has opened the horizon for a political settlement to the Syrian crisis.

Overshadowed by the terror attack on Istanbul’s international airport in late June 2016, which left forty-four people dead and dozens injured, Turkey’s policy realignment by mending ties with Russia and Israel underscored the failure of Ankara’s Syria policy. Days before the terror attack, Turkish president Recep Tayyip Erdoğan sent a letter of condolence to Russian president Vladimir Putin, in which Erdoğan formally apologized for the death of a Russian pilot whose aircraft was shot down near the Syrian border last November by Turkey. Erdoğan also offered to pay compensation to the pilot’s family.

Putin responded by moving to lift sanctions on Turkey and calling Erdoğan to convey his condolences for Istanbul’s suicide bombing. Soon thereafter, Sergei Lavrov, Russia's foreign minister, met with his Turkish counterpart Mevlüt Çavuşoğlu in Russia’s Black Sea resort of Sochi. The two officials affirmed the readiness of the two countries to normalize their relations and to restart a working group on fighting terrorism. Significantly, Lavrov emphasized that Moscow would be discussing difficult issues with Ankara, including “the task of preventing the terrorist infiltration into Syria from abroad, the task of preventing the use of Turkish territory in support of terrorist organizations in Syria.”

This clear Turkish political volte-face was justified by Turkey’s Prime Minister Binali Yıldırım, who stated on July 3 that “Russia is our eternal neighbor therefore the temporary deterioration in our relations is not something any of us wanted.” He added: “Our priority target is to remain friends with all the countries neighboring the Mediterranean Sea and the Black Sea; to use the opportunities with them instead of having crises.” Acknowledging that its foreign-policy objectives have been unsettled particularly as a result of its involvement in the Syrian civil war, Turkey is apparently reviving its “Strategic Depth Doctrine,” as devised by the country’s former prime minister Ahmet Davutoğlu. His doctrine aspired to transform Turkey from a central power into a global power, based on its unique geostrategic position and Ottoman legacy, while at the same time enhancing its stature by engaging regional countries so as to achieve “zero problems” with them.

On closer examination, however, Turkey’s political about-face is more the product of its recognition that its involvement in the Syrian Civil War, together with its ramifications for Ankara, has brought the county to the precipice of potential disintegration. Coming in the wake of successive terror acts committed by ISIS, the recent Istanbul suicide bombing is only a testament that Turkey’s policy of turning a blind eye to jihadi infiltration into Syria to fight the Assad regime had left behind a wide network of Salafi-jihadists, including Turks. The moment Turkey realized its strategic mistake and aligned itself with the U.S.-led coalition against ISIS by first opening Incirlik Air Base in September 2015 to American aircraft, Ankara has become the target of ISIS. It’s an open secret that during Turkey’s laissez-faire policy from 2011 to mid-2015, Salafi-jihadists established deep terror cells in the country, especially in Adıyaman, Antakya, Istanbul and Kilis, which also served as logistical conduits for foreign jihadi fighters making their way into Syria. The terrorists behind the Istanbul airport suicide bombing were foreign Syrian jihadi fighters from Russia, Uzbekistan and Kyrgyzstan.

Similarly, as shown in Russian-Turkish discussions, Turkey has apparently recognized the fact that all Salafi-jihadi organizations, including ISIS, Jabhat al-Nusra and Ahrar al-Sham, are terrorist organizations that can no longer be supported directly or indirectly to remove the Assad regime.

No less significant, Turkey, which played a key role in supporting the Syrian opposition to the Assad regime, has found itself at cross-purposes with the anti-Assad camp. By emerging as key players against both the Assad regime and ISIS, the Kurds of northern Syria have situated themselves at the center of American efforts to create a reliable pro-Western and effective anti-ISIS force. But the Kurdish forces of Rojava, the Kurdish name for the area in northern Syria currently controlled by the Kurdish forces, known as the People’s Protection Units (YPG), are considered as a terrorist group by Turkey for their alliance with the Kurdistan Workers Party (PKK), which the United States and Turkey have designated as a terrorist organization. Consequently, Turkey has been furious with American support of the YPG.

Nevertheless, Washington has justified its support for the YPG on the grounds that it is part of the Syrian Democratic Forces (SDF), which includes Arabs and Turkmen, fighting ISIS. This has not allayed the concerns of Turkey about a fait accompli autonomous Kurdish region in northern Syria assisting and fueling the PKK-led Kurdish rebellion in Turkey. The PKK has fought intermittently for decades to establish Kurdish autonomy in Turkey. Although it had signed off on a truce with the Turkish government while its imprisoned leader, Abdullah Öcalan, negotiated a peace deal with the government, the truce collapsed in July 2015. In response, the PKK has resumed its rebellion throughout Kurdish majority areas, whose strategic depth is none other than Rojava. Ultimately, for Turkey, the fight against what it considers Kurdish separatism can no longer be separated from its need to curb the potential of full Kurdish autonomy in northern Syria.

What made this situation untenable for Turkey have been the political and military ramifications of the potential outcomes of the ongoing battle over Aleppo and its countryside. Supported by the United States, the SDF has led a campaign to seize the city of Manbij from ISIS. Manbij is a strategic area west of the Euphrates river, near the Turkish border, and a bulwark for ISIS’s stronghold in Raqqa and its countryside. At the same time, Syrian opposition groups, led by Salafi-jihadi groups that Ahrar al-Sham, Jaish al-Islam and al-Nusra, have been trying to prevent the Assad regime and its allies from taking over Castello Road, which constitutes the only route into rebel-held areas of Aleppo. Meanwhile, following its recent seizure of the Menagh air base and Tal Rifaat, the YPG, supported by both United States and Russia, has reinforced its presence in Aleppo’s northern countryside and around the important border town of Azaz. This has left Turkey with grim consequences should the Salafi-jihadists or the YPG win the battle for Aleppo and its countryside.

Should the Salafi-jihadists expand their power to the border of Turkey, they will surely double down their terrorism threat to that country. Should the YPG win the battle for Aleppo’s countryside, they will succeed in creating a contiguous Kurdish-controlled territory across the whole Syrian-Turkish border (connecting Qamishli, Tal Abyad and Kobani with Afrin). Moreover, Turkey would have its whole border with both Iraq and Syria controlled by the Kurds. For Turkey, this scenario is tantamount to a death sentence.

As a result, Turkey has realigned its political priorities and moved to protect its national interest. This, however, does not mean that Turkey has abandoned its policy of opposing the Assad regime. Similarly, faced by a stalemate in Yemen, fiscal problems, and internal dissent and terrorism, Saudi Arabia cannot on its own effectively lead the anti-Assad camp. Moreover, some of its important allies, such as Egypt and Jordan, have already changed their priorities in Syria. Surely enough, this means that the anti-Assad campaign to remove the Assad regime has been overtaken by other pressing priorities, leading to the failure of its Syrian policy.

However, this failure of anti-Assad policy has not been translated into a victory for the pro-Assad camp. Cracks in the pro-Assad camp have become visible, as strategic priorities among the Assad regime’s defenders, Russia, Iran and Hezbollah, have cast a pall over the regime’s ambition and status. Russia has assured its allies that while its political and military involvement in Syria is about protecting the Syrian regime, it is willing neither to participate in an open-ended conflict nor to lead the way for the Assad regime to retake its lost territories. Cognizant of the shortage of fresh conscripts in the regime’s war machine, and reluctant to introduce its own troops to Syria, Russia has focused on Alawite territories and their approaches from Aleppo in the northwest to Damascus to Dara’a in the southwest, which make up Syria’s urban centers and the country’s outlet to the Mediterranean.

Moreover, Russia also has made clear to its Iranian and Hezbollah allies that it will not be party to any effort affecting Israel’s security. More specifically, Russia has thus far sanctioned Israeli actions in Syria if Jerusalem’s security has been threatened. In fact, Israel has maintained its policy of intercepting weapons smuggled to Hezbollah in Lebanon, and of assassinating operatives scheming to undermine Jerusalem’s security. For example, on December 19, Israeli jets bombed the dwelling of Hezbollah operative Samir Kuntar in a suburb of Damascus.