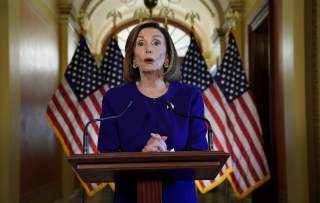 The news story may change, but the headline is always the same: impeachment. Support by Democratic Party leaders has reached a tipping point in support of the motion, stemming from what’s alleged to have been said on a phone call between President Donald Trump and Ukrainian president Volodymyr Zelensky.

As previously reported at the National Interest, Inspector General of the Intelligence Community Michal Atkinson wishes to bring a whistleblower complaint that he describes as being of “immediate concern” to the attention of Congress. He has been prevented from doing so by his superior, acting Director of National Intelligence Joseph Maguire, who says the complaint is neither pressing nor under DNI purview.

Multiple news outlets have reported that the complaint deals with a phone call between Trump and Zelensky from over the summer. No details have been released publicly, but the Wall Street Journal reported that Trump asked Zelensky no less than eight times to launch an investigation into the previous business dealings of Hunter Biden (son of the Democratic frontrunner) in Ukraine.

Describing the conversation as “pitch perfect,” Trump has denied all impropriety. “Now that the Democrats and the Fake News Media have gone ‘bust’ on every other of their Witch Hunt schemes, they are trying to start one just as ridiculous as the others, call it the Ukraine Witch Hunt, while at the same time trying to protect Sleepy Joe Biden. Will fail again!” Trump tweeted on Saturday.

Democrats don’t believe him. After a three-year failure to prove collusion between the Trump presidential campaign and the Russian government, progressives are becoming laser-focused on the content of the phone call. If Trump did ask Zelensky to investigate the Biden family, who may soon be Trump’s opponent in the 2020 election, in exchange for foreign aid in an explicit quid pro quo, it may constitute an abuse of power.

“I will tell you, it’s a great call, it’s a very honorable call, it’s a nice all,” Trump said yesterday during a press conference. In a tweet this afternoon, Trump said he had authorized the “complete, fully declassified and unredacted transcript” of the phone call to be released tomorrow.

Furthermore, Acting DNI Chair Maguire is set to testify publicly before both the House and Senate Intelligence Committees on Thursday. Lawyers speaking on behalf of the individual who filed the whistleblower complaint say their client also wishes to testify before Congress about what he or she knows.

These acquisitions have not satisfied critics. Democrats are not only demanding to see a transcript of the phone call, but the complaint that derived from it, which they believe will contain more damning information.

Former vice president Joe Biden addressed the controversy this afternoon. “If the president does not comply with such a request [for information] from the Congress, and continues to obstruct congress, and flout the law, Donald Trump will leave Congress, in my view, with no choice but to initiate impeachment. That would be a tragedy, but a tragedy of his own making,” he said. Up to this point Biden has dodged questions on Trump’s impeachment, while his more progressive primary opponents have made it a cornerstone of their campaigns. How this new stance will affect his image as a moderate is yet to be seen.

Regarding he and his son’s involvement in Ukraine, Biden said, “Even though every reputable publication has looked at the charge that has been made against me and found them baseless and untrue and without merit, that’s not about to stop him [Trump].”

Hours later, Speaker of the House Nancy Pelosi gave her own address. “This Thursday the acting DNI will appear before the House Intelligence Committee. At that time, he must turn over the whistleblower’s full complaint to the committee. He will have to choose whether to break the law or honor his responsibility to the constitution.”

“The actions taken to date by the president have seriously violated the constitution, especially when the president says, ‘Article II says I can do whatever I want.’ For the past several months we have been investigating in our committees and litigating in the courts, so the House can gather all the relevant facts and consider whether to exercise its full Article I powers, including a constitutional power of the utmost gravity: approval of articles of impeachment.”

“The actions of the Trump presidency revealed dishonorable fact of the president’s betrayal of his oath of office, betrayal of our national security, and betrayal of the integrity of our elections. Therefore, today, I’m announcing the House of Representatives moving forward with an official impeachment inquiry,” she said.

One hundred and fifty-five of the two-hundred and thirty-five House Democrats have already endorsed impeachment proceedings, along with former Republican Justin Amash. This still puts impeachment sixty-two votes shy of a majority. But after Speaker Pelosi’s endorsement, more moderate Democrats will be expected to shift quickly.

A Monmouth poll from one month ago put national support for impeachment at thirty-five percent, with sixty-one percent against. The latest polling from Emerson, released yesterday, puts Trump’s approval rating at its highest ever—forty-eight percent.