PMCs Can Win the War on Terror in Africa 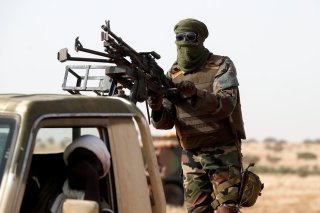 Africa is in a bad way but how bad is not well reported. The Obama and Trump administrations largely ignored the continent, preferring to focus their attention on Asia. Barack Obama, with his “pivot to Asia,” and Donald Trump with his hawkishness saw Africa as a proxy for America’s rivalry with China. But this attitude is folly. Africa needs an intervention not just to counter China’s exploitation and Russia’s opportunism, but for the sake of Africa’s own health and security. In my old private military contractor (PMC) outfit, Executive Outcomes (EO), we showed that successful intervention in Africa is possible.

The Need to Engage in Africa

The Western world’s negligence toward Africa has cost it dearly. That the Sahel region is in deep trouble is well known, but the unfolding collapse of Nigeria and the dangers now facing South Africa are not. At the same time, the eastern Democratic Republic of Congo is again in flames and the Islamic State insurgency in northern Mozambique is gaining strength, even though the Southern Africa Development Community propaganda about their counterinsurgency campaign says the opposite.

Does all of this matter? Long Covid, global warming, spiking energy prices, the prospect of global famine, Russians in Ukraine, Chinese ships circling Taiwan, poisonous killer bees: these challenges sap our sympathy and drain our strength. Why worry about Africa?

The great continent should matter to us because the sovereign states of Africa will become the failed states of Africa. Three times the size of the United States, Africa has 1.3 billion inhabitants. These masses can become a huge consumer market, or fall into a black hole for endless famine relief. The three thousand or so languages and tribal groupings of Africa can thrive as one of the most linguistically and culturally diverse areas of the planet, or they can become the world hub for unwanted migration.

With no help, Africa will be ground zero for Islamic violent extremist organizations (VEOs) and international organized crime (IOC). Further yet, more than anywhere else on Earth, vital resources and critical minerals are plentiful in Africa, which China—and to a lesser extent, Russia—are pursuing. Many of these resources are necessary to power the much-heralded clean energy revolution and twenty-first-century energy equipment.

Intervention against Africa’s insurgencies and collapsing security is a must.

A History of Success and Lessons Learned

In 1993, when I co-founded Executive Outcomes with oil and gas executive Tony Buckingham and others, we benefited from a rare alignment of world events. The Berlin Wall was gone and the Soviet Empire had collapsed. Nobody knew how a new world would function and there was a vacuum in which a firm like EO could play a big part.

Today, a multipolar world and precipitously declining South Africa and Nigeria have presented new vacuums in Africa in which private military contractors can take a leading role. And indeed, some have, such as STTEP International, with whom I am presently involved. It was STTEP that was spectacularly successful against Boko Haram in Nigeria in 2014 with very little equipment and next to zero support from their hosts and employers. But this is still marginal to the decisive future role PMCs will need to play to defeat IOC and VEOs across the continent.

Aid and training alone, however good or well-intentioned, don’t win through. Washington already sends between $6.5 and 7.5 billion to Africa annually, and U.S. Department of Defense training and equipment programs such as those practiced in Nigeria, Mozambique, and elsewhere have failed to turn the tides of war, however well conducted they may have been.

These old approaches will always fail in Africa because African institutions presently lack the strength and public trust to win alone. Age-old clan and tribal rivalries, alongside their craving for personal financial gain, on the part of leaders up and down the hierarchy, are too strong. We had to deal with this problem in Angola with EO when, to our surprise and disgust, we found that senior figures amongst the Angolan Forças Armadas Angolanas officer class were happy that the war should not be won. They were making money.

From EO we can learn much about how to deal with the present difficulties.

First has to come “The Just Cause.” Before Tony and I arrived with his company, Heritage Oil and Gas, Angola had already won the title of hottest proxy war of the entire Cold War. The party of the countryside, UNITA—at first a Chinese-backed group, but then a client of the United States—had been battling the urban-based, Soviet-backed MPLA.

By 1992, we thought this was all over. A U.S.-sponsored peace plan had led to the evacuation of all foreign forces—American, Soviet, South African, and Cuban—a demobilization of local forces, and the building of electoral rolls, all leading to the greatly anticipated November 1992 elections.

As a not-very-secret agent of Heritage Oil and Gas, I sat down with the leader of UNITA, Gen. Jonas Savimbi, for a day. Ostensibly, the capacity in which I was present at the meeting was that of aide to Lord David Steel, at the time the president of Liberals International. The meeting we conducted had the aim of ensuring peace: to get Savimbi’s word that he would not go back to war, even if he lost this election, and even if such a loss might be the result of a corrupt voting process.

Savimbi gave Steel (and me!) that promise. Then he lost the election and broke his word. He plunged the country back into war, thus betraying every Angolan. The just cause, Tony’s and mine, was a given. This was quickly made all the more personal when UNITA chose to attack our oil exploration operating base, Sovo, on the southern end of the Congo River.

The second major lesson from EO’s success was discipline. In part due to the end of the South African apartheid regime, the South Africa Defense Force (SADF) was at the time releasing large numbers of soldiers. The SADF was also tearing up those soldiers’ pension agreements. The Special Forces of SADF had been fighting their “Frontier Wars” for many years. They were very good soldiers who knew Angola and who had trained and worked with UNITA. They were therefore the ideal troops for EO. The importance of this cannot be overemphasized: the victories of EO were brought about by the quality of our troops, who all had to agree that all the discipline and traditions of SADF would apply. If a corporal told a soldier he needed a haircut, then a haircut was the result. This was important in the field, where the discipline of the EO troops, like their ability to fight, was outstanding. There were no atrocities, and the hearts and minds efforts of EO worked to great advantage.

The disasters of Iraq and Afghanistan, and the waste of these campaigns, continue to loom large over Western politics. But with EO, we learned that with high-quality soldiers and strong discipline, scrappier operations can succeed. We found that a small amount of “force multipliers”—meaning the clever use of certain key technical assets not available to the enemy and which increased operational capability—had a disproportionately high effect. This was magnified by the reputation we won for ourselves. Good as we were, our reputation became an exaggeration: a weapon of juju or black magic, whereby every setback or casualty that befell UNITA would be automatically blamed on the superpowers of EO.

With a budget that represents a minuscule fraction of U.S. defense spending, we managed to do something the United States hadn’t throughout the Cold War: win a war.

Despite that, America and its allies, then and since, have stated clearly that they do not wish to utilize PMC solutions in Africa. Numerous recent announcements to that effect have been made by the United States with regard to Nigeria and Mozambique, which have been echoed by the presidents of those countries. That opposition by Western powers is not shared by their rivals Russia and China. In the coming new cold wars against those great powers, intervention will therefore also have to come from us. If the West will not support EO-style PMCs, and they will not put boots on the ground to fight, then what can be done?

So, “The PMC is dead, long live the PMC.” Or perhaps, take from the Italian states of Da Vinci and Machiavelli. “The PMC is dead, long live the Free Company.” (I, for one, find condottiere chicer than mercenary). Taking the “PMC classic” model we used with EO and updating it with new tactics, diplomatic skills, and technology to match twenty-first-century warfare, I believe the many conflicts of Africa are winnable.