The Pentagon Should Partner with Congo’s Military 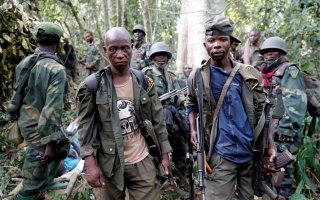 Every U.S. president takes a different military approach to security and counter-terrorism in Africa. In the wake of the September 11, 2001 attacks, George W. Bush first set up the Combined Joint Task Force-Horn of Africa (CJTF-HOA) which, since 2003, has operated out of Camp Lemonnier, Djibouti, and later created U.S. Africa Command (AFRICOM), currently headquartered in Stuttgart, Germany. Barack Obama maintained those bodies but preferred to rely more on drones than forward-deployed men in order to counter terrorists. He quietly deployed U.S. forces to Niger, for example, to create a drone base near Agadez. Drone strikes became a tactic of choice in Somalia.

AFRICOM sought largely to operate under the radar during Donald Trump’s administration for fear that any awareness that the United States had as many troops in Africa as in Syria would lead Trump to agitate for withdrawal. In the end, it did not work. The ambush by a local Islamic State affiliate of a U.S. patrol near Tongo Tongo, Niger, that killed four Americans, raised awareness to the extent of American involvement on the continent. A CIA officer died subsequently during a raid on a coastal village southwest of Mogadishu. Shortly before he left office and just after the Somalia incident became public, Trump ordered a complete withdrawal from the country where U.S. Navy SEALs were actively engaged in train-and-assist missions with their Somali counterparts fighting the Al Qaeda-linked Al-Shabaab. While AFRICOM confirmed the completion of the withdrawal shortly after, a tweet from the president of Somalia’s Jubaland state suggests the forces either never left or quietly returned. Either way, that is a positive move. Indeed, Biden would be wise to make an expansion of train and assist missions part of his military legacy on the continent.

Africa is the second-largest continent, and its security challenges are immense. While bad news emanates from parts of the continent: Somalia, Chad, the Central African Republic, and Mozambique, for example, other countries like Kenya, Somaliland, Botswana, and Malawi are establishing themselves as oases of stability. UN peacekeepers returned Liberia, Cote D’Ivoire, and Sierra Leone from the brink.

The reality—and something Trump never accepted—is that a small investment in security assistance upfront can pay tremendous long-term dividends. U.S. operators can be force multipliers to enable local forces to defeat terrorist challenges. Victory over terrorist and criminal gangs, in turn, enables governments to do the development work that can solidify the gains.

As the Islamic State and other terrorist groups seek to penetrate into central and southern Africa, the looming battlefield is not only Mozambique but also the Democratic Republic of Congo (DRC), or Zaire as it called itself between 1971 and 1997. For most Americans, the DRC may seem like a perpetual disaster: In just the last 25 years, the two Congo wars drew in nine countries and a few dozen other armed groups fighting each other and looting the DRC’s rich resources. The northern DRC is home to the Ebola River that lent its name to the hemorrhagic fever that has struck the country a dozen times.

The DRC has turned the corner, however. Whereas once DRC forces collaborated with Hutu génocidaires and other terrorist groups, now they share intelligence with their Rwandan counterparts in order to keep the terrorist groups and criminal gangs at bay. While the United Nations has a long presence in the region, it has done little to improve security. Rather, by systematically failing to disarm militants or separate them from the refugee population it has risked it. In effect, the UN today repeats the mistake UN peacekeepers made in the run-up to the anti-Tutsi genocide in Rwanda. The UN will not bring peace to the Congo; only the Congolese military can, but it needs U.S. assistance.

The DRC is willing to fight terrorists and is motivated to do so: the DRC’s army is angry that terrorist gangs have targeted its forces. Its government wants security. Instead, today, terrorists and criminal gangs target businessmen in Goma for kidnap and ransom. In short, the DRC has the will and incentive but lacks the capacity.

Simply put, a small investment in terms of a U.S. mentoring mission could allow the DRC to turn the corner. The issue is not simply Hutu extremists in the east. Intelligence professionals in regional countries also warn that the Islamic State is seeking to infiltrate Maniema, a DRC province with a large Muslim minority. Should the Islamic State succeed, they could use the DRC and its resources as a springboard to facilitate their spread elsewhere in the continent. Last week, I visited La Petite Barrière border crossing between Goma, DRC and Rubavu, Rwanda. While the Rwandan side is automated—Rwandans scan passports or ID cards and provide fingerprints or other biometric data on censors at gates—many Congolese carry only hand-written IDs that terrorists could easily forge. A small U.S. investment in biometrics, identity documentation, and capacity on the DRC side would benefit not only the African Great Lakes region’s security but America’s as well.

On foreign policy and defense, Biden’s team seemingly likes to do the opposite of Trump. In the Middle East and with Nord Stream 2, this has had deleterious implications for peace and security.  In Africa, however, Biden could correct Trump's neglect to the benefit not only of regional states but of broader U.S. interests and counter-terrorism policy as well.