Polish Democracy Is under Siege—by the European Union 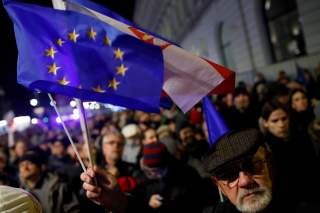 The European Commission, led by Luxembourg’s former Prime Minister Jean-Claude Juncker, is taking Poland to court in an attempt to force its government to roll back judicial changes introduced this April. Juncker and his fellow commissioners have asked the European Court of Justice (ECJ) to rule that Poland’s recent actions “risk . . . serious and irreparable damage to judicial independence in Poland.”

The European Commission is the main administrative organ of the European Union, and its President, Jean-Claude Juncker, is the de facto Prime Minister of the EU. Juncker and Poland’s Prime Minister Mateusz Morawiecki have been at each other’s throats over Poland’s judicial laws since the beginning of the year.

Their dispute centers on Poland’s decision to reduce the retirement age for Polish Supreme Court judges from seventy to sixty-five years old. Everyone—even Morawiecki’s Law and Justice (PiS) party—agrees that the retirement age was changed to force the retirement of older judges who were appointed under previous governments. The two questions at issue are: (A) is that legal? and (B) is that democratic?

With no sense of irony, the European Commission’s hysterical press release admonishes the ECJ to “protect the independence” of Poland by overturning the country’s own laws. Specifically, the Commission claims that:

Polish law . . . is incompatible with EU law as it undermines the principle of judicial independence, including the irremovability of judges, and thereby Poland fails to fulfil its obligations under Article 19(1) of the Treaty on European Union read in connection with Article 47 of the Charter of Fundamental Rights of the European Union.

Only a Polish constitutional lawyer can properly dissect the fine legal points at stake here. But the political points seem clear enough to anyone. Article 19(1) says simply that “Member States shall provide remedies sufficient to ensure effective legal protection in the fields covered by Union law.” And Article 47 guarantees all EU citizens the right to a fair trial in front of “an independent and impartial tribunal.”

That’s all pretty generic. Maybe it is wrong for a government to force judges to retire. But it’s a big step from the Article 47 guarantee of an “independent” judiciary to the European Commission’s claim that “the principle of judicial independence” includes “the irremovability of judges.”

In its usual meaning, an “independent and impartial tribunal” is a court that shows no favor to either side. It would take decades of expansive jurisprudence to argue those four words really mean that a democratically elected government cannot force judges to retire early for political reasons. After all, they are appointed for political reasons, as the bitter debate over Brett Kavanaugh’s confirmation shows only too well.

Confusingly, Poland’s own Constitution says that “Judges shall not be removable” but that “A statute shall establish an age limit beyond which a judge shall proceed to retirement.” That sounds like a formula for a Polish Marbury v. Madison. It doesn’t sound like a reason for a super-national organization to interfere in the politics of one of its member states.

But then, Poland has a history of getting pushed around by its larger neighbors. First it was Russia, Prussia, and Austria carving up the Polish Commonwealth in the late 1700s. Then it was the 1939 Molotov–Ribbentrop Pact, when the Russians and the Germans once again divided Poland between themselves. When Poland regained its statehood in 1945, it was as an occupied client state of the Soviet Union.

Since 1989, Poland has been free to forge its own destiny. It joined NATO in 1999 and the European Union in 2004. Its NATO membership secured its borders. Its EU membership was supposed to secure its democracy.

Democracy is once again under threat in Europe today—but it’s the European Union that is threatening it. Poland only regained full independence in 1991, and its current constitution was adopted in 1997. In American Constitutional time, that would put Poland at right around 1810. Democracy is messy, and it takes time to mature.

Poland’s democracy can handle this issue on its own. It doesn’t need Big Brother to make a decision for it. There’s an election due in 2019, and if the Polish people don't like what their government has done, then the Polish people can take their vengeance. But if the Polish people approve of what’s being done in their name, then what business is it of Juncker and Co. to interfere?