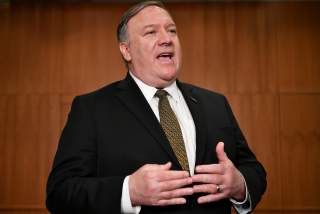 WASHINGTON— After weeks of pullback from an otherwise hawkish pose toward the Islamic Republic of Iran, the Trump administration seemingly reverted Thursday, instigated by two oil tanker attacks in the Gulf of Oman likely carried out by Iranian forces.

Recent Iranian maneuvers represent a “clear threat to international security, a blatant assault on the freedom of navigation, and an unacceptable campaign of escalating tension by Iran,” Secretary of State Mike Pompeo told reporters at State headquarters in Foggy Bottom. The British government, which has straddled a difficult line on Iran during the Trump era, agreed with the American assessment Friday, giving Washington cover.

Details remained murky, however. Skeptics, led by the Associated Press, poked holes. “It is a fact that only the [Iranian Revolutionary Guard Corps.] Navy has the ability to place mines like these,” Sen. Marco Rubio said. The AP reports that the owner of the struck vessel, the Kokuka Courageous, saw “flying objects” before the attack, undermining the mine thesis.

United States Central Command, while claiming video proves Iranian responsibility, issued a statement condemning any talk of war: “We have no interest in engaging in a new conflict in the Middle East. We will defend our interests, but a war with Iran is not in our strategic interest.”

CENTCOM’s statement was flagged: its commander, Frank McKenzie, controversially gave an address to the Foundation for the Defense of Democracies, a major hawkish power player, last month. McKenzie had previously maintained that recent troop buildups in the region prompted Iran to “step back” and moderate its ambitions.

Meanwhile, at State, on offer: a full-scale condemnation of recent Iranian actions.

“On April 22nd, Iran promised the world that it would interrupt the flow of oil through the Strait of Hormuz,” Pompeo said. In early May, the Revolutionary Guard Corps, now designated a terrorist organization by Pompeo, “attempted the covert deployment of modified dhows capable of launching missiles,” the secretary said.

Pompeo then tore in: “On May 12th, Iran attacked four commercial ships near the Strait of Hormuz. On May 14th, Iran-backed surrogates attacked by armed drones — struck two strategically important oil pipelines into Saudi Arabia. On May 19th, a rocket landed near the U.S. Embassy in Baghdad. On May 31st, a car bomb in Afghanistan wounded four U.S. service members, killed four Afghan civilians, and wounded bystanders.”

And critics, again, tore into the details. On the Afghanistan score, “This was the attack carried out likely by the Taliban. This is plain dishonesty calling Taliban a proxy of Iran,” Delhi-based journalist Aveek Sen told me. “There are just two main groups in Afghanistan—Taliban & ISIS. The Shia Hazara from Afghanistan who joined the Fatemiyoun have never carried out any attacks inside Afghanistan.”

On the Gulf of Oman attack, said Justin Logan at the Center for the Study of Statesmanship: “I'm absolutely open to the idea this was Iran. But to watch people assert it without even a second of scrutiny is really something.”

“There's much speculation about whether Iran was behind the attack against two oil tankers in the Gulf of Oman Thursday. Iran is definitely a plausible suspect,” Trita Parsi, president emeritus of the National Iranian American Council, told me. “But mindful of the Trump team's past history, there are also good reasons to be skeptical of any hasty conclusions.”

Politically, there is a growing concern among some of the president’s supporters that the American confrontation with the Islamic Republic could spiral into a deadly sideshow. A former senior administration official and a prominent former White House aide said Thursday night that saber-rattling gone wrong threatens the president’s reelection.