Trump Pulls Back in the Middle East 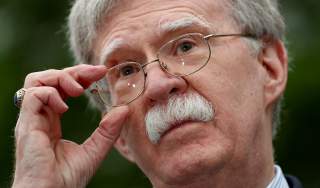 The primaveral speculation that the Trump administration could lead the United States into a fresh war in the Middle East is looking short-sighted. The administration, led on this score by the president himself, is signaling a pump on the brakes.

The White House’s approach—a wholesale rejection of political Islam and Iran’s Islamic Republic—had brought the United States seemingly on the brink of military exchange in the Persian Gulf. For nearly thirty months, U.S. policy had been a Sunni autocrat’s delight.

First, three sources familiar with the matter project an image of a national security advisor, John Bolton, on the bench, at best, and on the outs, at worst. The president’s public contradictions of his national security advisor are indicative enough. But sustained chatter that a suddenly irenic president could part with his third national security council chief in less than three years reached a fever pitch last week, amid a scathing New York Times report that highlighted the pair’s differences and lack of personal chemistry. Bolton’s portfolio is the Middle East and Russia; he is the administration’s saber-rattler-in-chief in Eurasia. And realists reject deployment hikes in the region. “The United States already has more than twenty thousand troops in the Middle East and more nearby,” said Benjamin H. Friedman of Defense Priorities. “That’s already too many.”

Second, erstwhile Iran hawk Secretary of State Mike Pompeo has now publicly abandoned conditional negotiations with Iran. Secretary Pompeo is now saying he’ll deal with the Islamic Republic—that his State Department has led the charge against—sans preconditions. Pompeo, the peerless Donald Trump whisperer, is in sync with a president who publicly favors a new deal with Iran’s mullahs. In contrast to most of his Republican colleagues, and much of his administration, President Trump has registered outright ambivalence on Iran’s regional behavior. Iran “can do what they want, frankly” in Syria, President Trump said earlier this year. “We’re prepared to engage in a conversation with no preconditions,” Pompeo said in Switzerland last week. “We’re ready to sit down with them.” On Monday, Pompeo’s offer was summarily rejected in an Iran now crawling with re-ascendant hardliners: Iranian Foreign Ministry spokesman Abbas Mousavi said that the American overture represented little more than “word play.” Still, Pompeo’s change in tune represents a dramatic shift from where the chief U.S. diplomat was just months ago, when he was emphasizing the terrorist nature of Iranian military leaders.

Third, Trump surprisingly sided with a pivoting Pompeo against his own son-in-law, senior advisor Jared Kushner, on Sunday. Kushner is point man on Israel-Palestine peace, but leaked audio from the Washington Post has undermined the U.S. united front. “It may be rejected,” Pompeo said on Kushner’s plan. “Could be in the end, folks will say, ‘It’s not particularly original, it doesn’t particularly work for me,’ that is, ‘it’s got two good things and nine bad things, I’m out.’” Pompeo said: “This has taken us longer to roll out our plan than I had originally thought it might—to put it lightly.” Pompeo noted: “I get why people think this is going to be a deal that only the Israelis could love. I understand the perception.” The president’s response to the report was the coup de grâce, saying of Pompeo: “He may be right.” And senior advisor Kushner’s Sunday appearance on Axios—where he said “I’m not here to be trusted” by the Palestinians and indicated that the group wasn’t yet civilized enough to govern itself—scored low marks in Washington.

On the Middle East, the administration’s approach could mirror its tack on the Korean peninsula—“fire and fury,” followed confusingly by an even more furious appetite for earnest negotiation. But the question, however, remains: is this new tone from the president, his chief diplomat and their loyalists only temporary?