The Rise of John Bolton 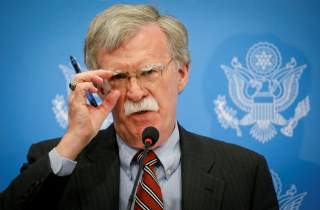 Jeremy Shapiro, of the Brookings Institution and the European Council on Foreign Relations, observes: “Judging by his speech on the ICC, John Bolton has lots of time on his hands.” Indeed, the national security advisor’s speech to the Federalist Society, the conservative legal mainstay, struck many observers as eccentric.

“What Is John Bolton’s Bully-Pulpit Attack on the International Criminal Court Really About?” blared The New Yorker.

For some, it was confirmation of the diagnosis of Tom Wright, also of the Brookings Institution, who wrote earlier this year that Bolton’s career showed a consistent “obsession with law at the expense of strategy.” For restrainers, the tact isn’t necessarily inconsistent with the core value of protecting American sovereignty, but Bolton’s timing and target selection remain curious. Why the ICC, and why now? A quadruple threat of foreign-policy crises—Iran, Syria, North Korea and Russian interference—continue to loom.

No individual outside of Africa has ever been indicted by the ICC. The prospect of American soldiers at the mercy of globalist jurists surely frightens many in the president’s base, but the reality is that scenario is far from taking place.

A core explanation is that Bolton has been freed up to pursue a bevy of personal projects.

Public laceration of the feckless international tribunal is one of them. But there are others. Many of Bolton’s actions represent the accomplishment of long-standing goals that very much precede the political rise of Donald Trump.

In the George H. W. Bush administration, while at the State Department, Bolton worked at preventing Palestinian Liberation Organization membership in the World Health Organization. This week, on the same day as his bromide against the ICC, it was announced that the United States was shuttering the PLO’s offices in Washington. It’s worth noting that Bolton has coordinated with Israel and his counterpart, national security adviser Meir Ben-Shabbat, perhaps more than any U.S national security advisor in history.

And two sources familiar with the discussions say that Bolton’s NSC is also weighing a push to label the Muslim Brotherhood a terrorist organization, a longtime Bolton target. It’s an aim consistent with earlier efforts by Mike Pompeo, now secretary of State. As a lawmaker, then-Congressman Pompeo pushed for the designation in vain.

Now, though, the winds is at the back of many of who seek this end, including controversial conservative think tanker Frank Gaffney. Gaffney’s Center for Security Policy has often subtly pushed the administration into a more hawkish line. The administration officially maintains that its policy toward Iran is not regime change; the CSP, whose former chief of staff, Fred Fleitz, is now Bolton’s chief of staff, calls for regime change. And on the Muslim Brotherhood, Gaffney said in July: “Designate the entire terrorist Muslim Brotherhood now.” Gaffney is careful, and hedged, with his namechecks. “In 2011 then-FBI Director Robert Mueller told Congress that ‘elements of the Muslim Brotherhood both here and overseas have supported terrorism,’” Gaffney related, referencing the now-special counsel. At the same time, he thanked Ron DeSantis, the Trump-favorite candidate for Florida governor, for his efforts against the Brotherhood.

And Bolton is increasingly successful in his knife fight with Defense Secretary James Mattis. Earlier this year, the National Interest was the first to publish the news of Bolton’s hiring of Mira Ricardel, a former defense official pushed out by Mattis in 2017. It appears Bolton and Ricardel have secured some reciprocity. A source close to the Pentagon tells me Ricardel was involved in the recent termination of a key Mattis ally at DOD. Mattis’ falling out of favor with President Trump has been well documented; in recent days, the anonymous letter in the New York Times has convulsed a relationship already on the wane. Sens. Tom Cotton and Lindsey Graham, as well as retired Gen. Jack Keane, who’s claimed to have turned down the job before, are potential replacements.

It’s possible that Bolton’s effort against the ICC is laying the groundwork for a spectacular move: an increasingly renegade president prepared to withdraw from Afghanistan who hands the mess over to Erik Prince. Prince, whom I met last month at Steve Bannon’s house in Washington, has continued to push his plan to partially or completely privatize the U.S. war effort as it grows increasingly unpopular. Prince has taken his case to key allies of the president and his base, including Tucker Carlson, in recent months. And Prince was involved this week in the promotion of Bannon’s movie, Trump @War, which is heavy on foreign policy. The Prince plan or any move in that direction divides restrainers. On the one hand, it draws down the commitment of U.S. service personnel in the region and offers a change of course from a failed status quo. On the other hand, it hardly reduces the U.S. footprint there—potentially deepening American exposure and empowering one of the most shadowy figures, Prince, from the George W. Bush era.

But at the same that Bolton has been freed up to freelance, it’s also true that, on other matters, he’s running a fairly conventional National Security Council.

Bolton has been given the Syria and Russia portfolio, as I’ve reported, and as relayed by the scuttled Trump administration ambassador to Korea, Victor Cha.

This week, Bolton and Dan Coats, director of national intelligence, explained a new executive order on a subject as sensitive any for this presidency: the imposition of “certain sanctions in the event of foreign interference in an United States election.”

The anonymous op-ed in the New York Times argues this White House is “two track”: self-contradictory presidential rhetoric that flies far from the actual, real actions of the administration.

Bolton say that’s nonsense, and the efforts, in part, of his NSC prove it. The president is singing these orders, after all.

“He signed this executive order,” Bolton told reporters on a call Wednesday. “So I think his actions speak for themselves.”