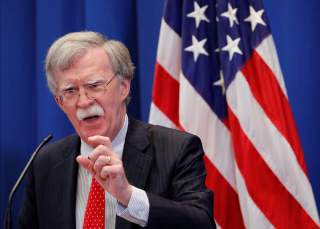 Fred Fleitz is on his way out the White House. Fleitz, the short-lived National Security Council chief of staff, has a fiery and hardline reputation (full disclosure: we’ve tangled), befitting the national security advisor he serves. He’ll return to Frank Gaffney’s Center for Security Policy; Fleitz has alternated as chief of staff to National Security Advisor John Bolton or Gaffney in various capacities, dating back to Bolton’s days of haunting the UN. He will now take over for Gaffney.

“Throughout his career, Fred Fleitz has been one of the center’s most admired allies and, in recent years, one of its most accomplished staff members. I’m thrilled that he agreed to my request to wrap up as swiftly as possible his latest stint of public service in the Trump White House, and succeed me as president of the Center for Security Policy,” Gaffney said, announcing the move.

The Center for Security Policy announced that Gaffney will take over the role of executive chairman, and that Fleitz will helm “the Center’s Second Thirty Years.”

Still, some worry in the wake of the probable murder of Saudi journalist Jamal Khashoggi, that the White House is poised to taper back from its bellicose commitments against political Islam and the regime in Iran. Much has been made of how integral the Saudis are to the counter-Iran strategy, but less attention has been given to the fact the Trump administration, until now, viewed Riyadh as the leading light against barbarism and Islamic extremism.

“We will make history again with the opening of a new Global Center for Combating Extremist Ideology—located right here, in this central part of the Islamic World,” President Trump said in Saudi Arabia in 2017. “This groundbreaking new center represents a clear declaration that Muslim-majority countries must take the lead in combating radicalization, and I want to express our gratitude to King Salman for this strong demonstration of leadership.”

That anti-Islamic extremism tact was a broad stance, encompassing an opposition not only to Al Qaeda and the Islamic State, the Sunni extremists responsible for most of the radical Islamic terrorist attacks against the United States, but also political Islamist groups with a broader base of support in the region, namely: Hamas, Lebanese Hezbollah and the Muslim Brotherhood.

Some restrainers have long attacked such a strategy as foolhardy, arguing that it isolates the United States in the Middle East. “I’m not talking about talking to Al Qaeda. I’m not talking about talking to dead-enders, Jacobites, revolutionaries, people who want to burn it down” says Mark Perry, the author of Talking to Terrorists. Perry said: “Al Qaeda doesn’t have a constituency. They’re just a revolutionary network. The people I’m talking about talking to are Hamas, Hezbollah and the Muslim Brotherhood, the three most powerful and influential organizations in the Middle East: the great, middle ground of Islam.” And Scott McConnell, founding editor of The American Conservative, has argued to me: “I think there’s substantial consensus that Hezbollah is a sort of state within a state of Lebanon, confessionally divided with weak central government. . . . What we typically call Shi’ite terrorism more resembles what the IRA did, well organized strikes against political or military targets, than more random suicide strikes at civilians on the Al Qaeda or ISIS model.”

But this administration, and many of its allies, have disagreed.

Trump’s “American First” and “bring the troops home” sentiment has been swiftly countered, even contradicted, with remarks such as “I think Islam hates us.” Administration fans counter that Trump has always been an offensive realist, not a noninterventionist, and in that respect, Bolton is the perfect national security advisor for him.

Perceptions to this effect created ample space for Saudi Arabia and the Gulf monarchies to swoop in during the early days after Trump’s 2016 victory. On a press call in 2017, a senior administration official explained to reporters that the president was travelling to Saudi Arabia on his first international trip and making it the anchor of his Middle East strategy because “they approached us” first during the transition.

But all that threatens to fray now amid the grisly Khashoggi affair. Sens. Marco Rubio and Lindsey Graham, two of the upper chamber’s most hawkish, traditionally pro-Saudi voices, have each said in recent days that the Saudis must pay a price for the Washington Post columnist’s likely assassination. Some supporters of the administration’s strategy in the Middle East appear worried that Trump could take his eye off Iran and political Islam, in a potential pull-back from the relationship with Riyadh.

“US and Saudi interests are aligned,” Walter Russell Mead writes in the Wall Street Journal. “Even as he responds with appropriate gravity to a serious provocation, [Secretary of State] Pompeo must give Saudi authorities the confidence that sober and sensible policies will bring continuing American support for the kingdom’s independence and reform. . . . The Muslim Brotherhood, Turkey’s President Recep Tayyip Erdogan and the ayatollahs of Iran are huddled over the corpse, hoping to turn a political profit from the death of an innocent man.”

But some fans of the status quo aren’t too worried. They remain confident that Trump will keep hold of the flame. The president’s recent statements pointing to possible rogue agents and emphasizing the importance of arms sales to the Kingdom lend credence to such confidence.

“I don’t expect the White House to cave to this newest moral panic,” David Reaboi of the Security Studies Group texted me Wednesday morning. He implicitly compares the Khashoggi affair to the Kavanaugh affair, as Trump reportedly done, as well: “You know you’re in the midst of a moral panic when even asking for evidence or a legitimate investigation gets you shouted at. Open advocacy and bullying is now the default setting of the American media, and the president has shown that he’s impervious to what is obviously a pressure campaign.”

Says Reaboi: “If the administration is pressured into some kind of retaliation against the Kingdom, it’s really America’s interests that will suffer. Is there a more robustly pro-American leader waiting in the wings if the pressure on KSA leads to the fall of MBS?”

Still, some in this contingent are uneasy. It’s not likely his departure was directly related, but Fleitz was perhaps the leading agitator in the administration against the Muslim Brotherhood, a hobby horse of the Center for Security Policy. As I reported in September, the NSC, under Fleitz’s administration, was weighing labeling the Brotherhood a terrorist organization.

After Khashoggi, are some in the the administration preparing to pivot away from the hardliners?

“Why would Fleitz leave Bolton?” a source close to Gaffney texted me Wednesday. So far, however, Trump has not altered his approach.