The Post-Election Plan to Pack the Supreme Court 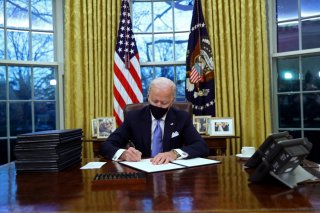 For the first time in nearly a century, court-packing has been put on the table as a “serious” reform to the Supreme Court.

In 1983, then Sen. Joe Biden called court-packing proposed by President Franklin Roosevelt in the 1930s a “bonehead idea.”

It appears that the era of serious statesmanship is over and the time of the “bonehead idea” has arrived.

Biden was wishy-washy on the campaign trail about whether he now supported court-packing—an increasingly popular idea in left-leaning intellectual circles—leaving the possibility open but never fully committing to the idea. It seems post-election that his presidential administration is at least taking the initial steps leading to court-packing, creating a commission to examine the issue.

A group of powerful House Democrats recently unveiled legislation to increase the number of Supreme Court justices from nine to thirteen. It would be the first time the Supreme Court expanded since just after the end of the Civil War.

“Some people will say we're packing the Court,” said Rep. Jerry Nadler (D-N.Y) who is the House Judiciary Committee chairman, at a press conference announcing the bill. “We’re not packing. We’re unpacking. Sen. [Mitch] McConnell and the Republicans packed it over the last couple of years.”

By “packed it” he meant that Republicans used their power and majorities to fill vacancies on the Supreme Court and other federal courts.

House Speaker Nancy Pelosi (D-Calif.) said that she would not bring the legislation, but on the other hand, she voiced support for Biden’s vote packing commission.

A group of Republican senators then held a press conference on Thursday to voice opposition to the court-packing idea.

“Packing the court and tearing down the institutions that protect our rights is fundamentally wrong,” Sen. Ted Cruz (R-Texas) said.

So, what’s to be made of this sudden push to expand the Court?

Of course, as mentioned above, court-packing was famously, or infamously, attempted by Roosevelt in the 1930s.

Large parts of Franklin D. Roosevelt’s economic program had been effectively blocked by the Supreme Court. This clearly didn’t sit well with Roosevelt, who was used to political success after his election in 1932.

Shortly after his re-election in 1936 that also saw the Democrat Party build significantly on their national majorities, Roosevelt proposed legislation that would add justices to the Supreme Court “where there are incumbent judges of retirement age who do not choose to retire or to resign.” He set the retirement age to seventy. Naturally, it was four Supreme Court justices over seventy who had most frequently stymied his legislation and declared it unconstitutional.

Given the partisan balance of Congress, which at that point was almost entirely Democrat, it may seem natural that Roosevelt would have had his way with this plan, but that wasn’t the case at all.

He met swift and often hostile opposition from many congressional Democrats.

Sen. Burton Wheeler of Montana, a Democrat ally of Roosevelt, blasted his court-packing plan in a 1937 speech. He explained how it would ultimately create a “political court,” that would destroy the independence of the judicial branch and undermine safeguards protecting American liberty. He called court-packing “a weapon whose use is only dictated by the conscience of the wielder.”

The Senate Judiciary Committee had even more scathing words for Roosevelt’s court-packing plan in a report on the proposed legislation, worth quoting at length:

We are told that a reactionary oligarchy defies the will of the majority, that this is a bill to ‘unpack’ the Court and give effect to the desires of the majority; that is to say, a bill to increase the number of Justices for the express purpose of neutralizing the views of the present members. In justification we are told, but without authority, by those who would rationalize this program, that Congress was given the power to determine the size of the Court so that the legislative branch would be able to impose its will upon the judiciary. This amounts to nothing more than the declaration that when the Court stands in the way of a legislative enactment, the Congress may reverse the ruling by enlarging the Court. When such a principle is adopted, our constitutional system is overthrown!

The committee concluded of the court-packing idea that “it is a measure which should be so emphatically rejected that its parallel will never again be presented to the free representatives of the free people of America.”

Unfortunately, it is being put before Americans once again. The difference is that this time it appears to have the backing of members of Congress. So far, the only significant rebukes of this bad idea have come from Republicans. Though Justice Stephen Breyer, who was appointed to the Supreme Court by Democrat President Bill Clinton, called it a terrible idea that would undermine the judiciary.

What’s remarkable about this attempt to pack the Supreme Court is that Democrats only have slim majorities in Congress. In the 1930s, the argument for court-packing stemmed from the Supreme Court striking down legislation that presumably had overwhelming democratic support from the American people.

Today’s plan seems to be an even more desperate attempt to gain partisan control of the judicial branch in perhaps only a few fleeting years of power. The narrow 2020 election was a far cry from the landslide of 1936.

Not only do Democrats have a tenuous grip on national political power, but court-packing as an idea is enormously unpopular with the American people. According to an April 16-19 Morning Consult poll, only “26% of voters say Congress should pass a law allowing more than nine justices to serve on the Supreme Court.” Almost all of that support comes from Democrats and virtually none from Republicans and independents.

The scheme is deeply unpopular and will likely fail. Perhaps it is just being used as a means to rally partisan Democrats, or more perniciously, to work as a threat to members of the Supreme Court to bend to their will, or else.

Regardless of the ultimate motivation, it’s a telling sign of the departure from constitutional governance and even basic prudence that infects America’s elite political class. Biden was right in 1983, court-packing is a bonehead idea, and it appears that our nation’s capital is filled with more boneheads than ever.