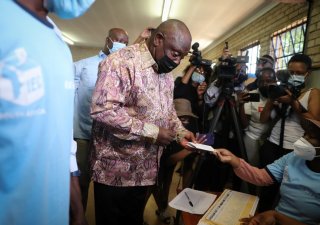 Many African states have presidential term limits codified in their constitutions, but in practice, they have given rise to various interpretations and manipulations. Despite some states where this limitation does not prevent leaders from staying in power for life, there are many other cases where African democracies have had transitions of power. This salutary practice deserves to be encouraged not only among these African states but across the whole continent. Such an endeavor could not only help prevent acute political crises, but also promote favorable ground for good governance, transparency, anti-corruption, peace, prosperity, and development.

Presidential term limits are a principle that needs to be explained in the historical context of the West, where it was born. Although the earliest experiments with term limits were initiated in ancient Greece, it was the United States that first articulated the principle in its most elaborate form in contemporary times. For a long time, limitations remained absent from the American constitution. Non-limitation was thus implicitly enshrined in the U.S. Constitution as the principle governing the exercise of presidential power; however, President George Washington’s decision not to run for a third consecutive term set a precedent that then became the norm. This example was followed by Presidents Thomas Jefferson, James Madison, and James Monroe. Over time, this practice became a constitutional custom in the United States. From then on, no American president was allowed to serve more than two consecutive terms. Later, attempts by Presidents Ulysses Grant and Theodore Roosevelt to obtain a third term failed. Only President Franklin D. Roosevelt succeeded in obtaining a third term during World War II, and then a fourth in 1944. But this last one was shortened by his death. This sequence of terms by the same president displeased the American public and was the subject of strong controversy and lead the United States to adopt the twenty-second amendment to the constitution which established the length of a presidential term at four years, renewable only once. This could be described as going “Back to George Washington.”

By contrast, in France, the non-limitation of the term of office lasted for a long time until the fourth Republic, under which the constitution only authorized one renewal of the presidential term. Under the Fifth Republic, the principle was abolished in order to reinforce the pre-eminence of presidential power as conceived by General Charles de Gaulle. But in practice, the principle remains. In French-speaking Africa, most constitutions adopted after independence authorized unlimited presidential terms. In the 1960s and 1970s, for example, only a few countries, such as Togo, Senegal, Mali, and Burkina Faso, opted for term limits, although they were not really respected in practice. It was not until the early 1990s that the principle became the rule in almost all African states. The wave of political changes in the world at that time was obviously a determining factor in this evolution.

Today, of the fifty-four member states of the African Union, thirty-five countries still have the limiting clause. Indeed, it appears that term limits are not really a firm lock that prevents access to a third or even an umpteenth term in office to remain in power for life. Several heads of state have done so in the past, some have done so in the present, and others have ambitions to follow suit in the near future. The practice is more common in francophone Africa than elsewhere and has allowed several heads of state to remain in power beyond two terms. According to Issiaka Souaré, of Jeune Afrique, 65 percent of African states’ constitutions mention and maintain in their Fundamental Law (constitution) the limitation of mandates to two terms. Between December 2002 and April 2010, a dozen countries have deliberately repealed it. Among them are Gabon, Chad, Cameroon, Uganda, Djibouti, and Togo. Togo’s decision to later reinstate this provision while taking care not to give it retroactive effect allowed Faure Gnassingbé to run for a new presidential term in 2020 after coming to in 2005, following the death of his father—contrary to the Togolese constitution. Moreover, in 2015, Togo and Gambia were the two West African states to oppose the recommendations of the Economic Community of West African States (ECOWAS) calling for the insertion of presidential term limits in the constitutions of all its member states. In other countries, the leaders have avoided a pure and hard repeal and have opted for an amendment that has the effect of resetting the counter to zero, that is, canceling all the terms previously served and opening the way for new possibilities of exercising power. In 2015, President Denis Sassou Nguesso of Congo, Pierre Nkurunziza of Burundi, and Paul Kagame of Rwanda resorted to this dishonorable practice. It is worth noting that countries such as Eritrea, Ethiopia, Gambia, Equatorial Guinea, Lesotho, Libya, Morocco, Mauritius, Sahrawi Arab Democratic Republic, Somalia, South Sudan, and Eswatini (formerly Malawi) have never had this limiting provision in their constitutions.

There is an abundance of arguments in favor of not limiting presidential mandates. Proponents of this option believe that legal texts, like state constitutions, should reflect the societal realities of the moment. The unlimited mandate would therefore not be contrary to the sovereignty of states and peoples to choose who they want and maintain it as long as they want. Some go further by comparing political power to traditional African chieftaincies where only the chief or king can be replaced upon his death, even if he were physically and mentally incapable of leading his own family. Similarly, they consider the limitation as anti-democratic, as it would deprive citizens of their aspiration to lead, because of their age. The unlimited possibility of election from the age of eighteen should, in their view, also entail the possibility of being indefinitely eligible. The German and British examples of indefinite terms for heads of government are given as a reference. Today, in sixteen countries on the continent, the principle of limitation is circumvented. In ten others, the limitation is included in the constitution, but not implemented. In the remaining eight countries, it is non-existent.

A Violation with Multiple Consequences

The obstruction of presidential term limits has an impact on the political life of states by distorting the democratic process. The supporters of term limits are legion. They consider that this constraint is indispensable to give robustness to electoral democracy. Such a provision exists in thirty-eight countries, and it is seen as a political achievement. But it is frequently undermined. The fact that, since 2000, at least thirty African presidents have attempted to extend their term of office beyond the fixed limits and that twenty of them have succeeded in doing so must therefore be interpreted as a setback. The most recent cases of this backsliding occurred in 2020 when Presidents Alassane Ouattara and Alpha Condé, by running for a third term in Côte d’Ivoire and Guinea respectively, undermined the constitutional edifice and weakened the state’s foundations. The questioning of the principle of presidential term limits, therefore, poses a significant risk to the state.

A leader who stays in power forever reinforces the breeding ground of bad governance, corruption, nepotism, clannism, ethnicity, etc. Olivier Duhamel pleads for the people to help their leaders to protect themselves against this drift, by limiting their mandate. “The power too prolonged corrupts more deeply. The man in power tends to keep it, the man in power wants to perpetuate himself. Let us protect the leader against himself.” Joseph Siegle and Candace Cook, based on a survey by Transparency International, have linked high levels of corruption to the longevity of leaders in power. African heads of state who stay in power do not hesitate to use patronage to win the loyalty of their supporters and to get opponents to change their positions. When this method does not work, the use of force has free rein. In April 2015, Burundian president Pierre Nkurunziza’s desire to run for a third term of office triggered strong protests in the country. In response, the government unleashed a fierce crackdown on the protesters. Political opponents and civil society actors were beaten, threatened, imprisoned, or summarily executed. Some had to go into exile to save their lives. More than 400,000 Burundians have been forced to move.

The Effectiveness of Term Limits

Although rare, respect for presidential term limits is now part of the political mores of some African states. A number of factors stand out and explain this fact.

Some countries on the continent have become models for term limits. These countries see the renewal of the ruling class as necessary for political stability. Today, twenty countries on the continent are working to respect term limits. Southern Africa is particularly respectful of the principle, as are some West African countries. In Namibia, President Hifikepunye Pohamba did not stand for re-election in 2015, and Ellen Johnson Sirleaf did so in Liberia in 2018. So did Niger in 2021, where Mahamadou Issoufou, after two terms, stepped down. Botswana also stands out as an example in this regard. In these countries, the management of the res publica is not the monopoly of an individual, a clan, or an ethnic group. By complying with constitutional provisions, successive leaders contribute to the consolidation of democracy. Gambia has moved in the right direction with the constitutional reforms carried out in 2015 after Adama Barrow came to power. The country is entering a new democratic era after nearly thirty years of dictatorship and unrestricted rule with human rights abuses. The new constitutional law limits the presidential term to a maximum of two and goes further by retroactively counting the years prior to its entry into force. In Nigeria, compliance with term limits has become a political habit since an attempt to challenge them failed on May 16, 2006, when more than two-thirds of Nigerian senators rejected a constitutional reform bill in a voice vote.