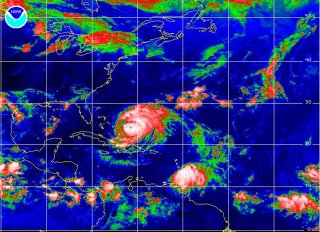 In November, two devastating storms hit Central America in a space of two weeks. Hurricanes Eta and Iota pummeled Honduras, Nicaragua, and Guatemala where winds, rain, and flooding caused significant destruction. The effects of these hurricanes may well rank as among the worst in the region’s history. Hurricanes Eta and Iota led to the loss of more than two hundred human lives and damaged an economy already expected to contract by as much as 9 percent due to the coronavirus pandemic. In Honduras, the economic engine of the country—the Valley of San Pedro de Sulla—was one of the most affected areas. Business leaders in the area estimate a loss of 40 percent of gross domestic product due to the hurricanes—this is in addition to the thousands of people being left homeless.

The year 2020 was the busiest hurricane season on record, and the fifth consecutive year since 2016 to log at least one Category 5 storm. Climate scientists attribute some of this increased activity to particularly warm Caribbean Ocean temperatures, and such warming is only expected to increase in the coming decades. These are likely not the last devastating storms that Central America will face in the coming years.

As the global community works together to assist Central America in recovering from this disastrous season, experiences from other recent disaster recovery efforts offer some helpful lessons, both for the governments of the region as well as outsiders providing resources and support.

First, the United States and the greater global community could take more decisive action to assist recovery—the suffering and losses are great and damages too extensive for the affected countries to recover alone. Fortunately, aid has poured in, with the Central American Bank of Economic Integration announcing $2 billion in loans, the InterAmerican Development Bank announcing $1.2 billion in loans, and USAID announcing $48 million in help. But managing and coordinating this and other expected aid can be tricky. Recovery does not rely on money alone, but on the capacities of the countries to manage complex recovery processes. Recent ongoing disaster recoveries in Puerto Rico and the U.S. Virgin Islands, after 2017’s Hurricane Irma and Hurricane Maria, revealed how much capacity building can be needed in government management capabilities, supply chain efficiencies, financial management, and workforce skills.

Next, as emergency response activities transition to recovery, the countries affected would benefit from a coherent and thoughtful strategy that goes beyond repairing damaged infrastructure. Other disasters that struck Puerto Rico in 2017, such as Hurricanes Irma and Maria, led to a shift towards “building back better.” Natural disaster impacts are greatest where development is misaligned with natural risks, and the recovery from these disasters provides an opportunity to address the root causes of their vulnerabilities. The aim of disaster recovery should now be to (1) reestablish community-sustaining infrastructure and government services, (2) increase resilience to future disasters through the harnessing of natural solutions; (3) improve equity in access to resources and economic opportunities; (4) improve overall environmental conditions; and (5) modernize and decarbonize the region’s economy through, for example, a decentralized electric grid that would provide more resilience. Puerto Rico’s Economic and Disaster Recovery Plan, for instance, includes a wide range of investments designed to improve all sectors while taking into account the economic potential of the region.

A successful strategy would not only create infrastructure, but also improve public services, health, and the economy so they are more resilient to future natural disasters. And doing so can take a lot of time. The public may assume that disaster recovery can take place in a few short years. However, the United States and other donors will need to be prepared for sustained support to Central America over a decade or more. After Hurricane Katrina and Hurricane Rita slammed into the Gulf Coast in 2005, Louisiana developed a fifty-year Coastal Master Plan to stabilize its coastal region and increase its resilience to hurricanes. Recovery in Puerto Rico and the U.S. Virgin Islands has barely begun. The rebuilding from Hurricane Sandy, which was viewed as fast, took almost a decade.

Lastly, the countries in the Americas would need to prepare to handle the unfolding migration surge and humanitarian catastrophe effectively and with compassion. For instance, after Hurricanes Irma and Maria in Puerto Rico, an eighth of Puerto Rico’s four million residents moved to the continental United States. After Hurricane Mitch, in 1998, thousands of Central Americans migrated north over the U.S. border. And this case is no different—already thousands of Central Americans have left the region on foot and are looking for safety and opportunity at the U.S. border. The ability of the U.S. immigration system to handle this surge of refugees is strained due to an already overwhelmed system and the coronavirus pandemic.

President-elect Joe Biden has made a commitment to increasing aid to Central America and addressing the root causes of instability in the region—ongoing gang violence, instability, and economic decline. The 2020 hurricane season has only added urgency to this need. This may be an opportunity to fix past problems and prepare for future threats. Disasters can be tipping points for communities—to something better.

Shelly Culbertson is a senior researcher focusing on recoveries from disasters and conflicts at the nonprofit, nonpartisan RAND Corporation.

Ismael Arciniegas Rueda is a senior economist at RAND, where he works on infrastructure’ resilience to natural disasters and energy markets.

David Groves is a senior researcher and co-director of the Climate Resilience Center at RAND, where he works on climate adaptation and decarbonization strategy.