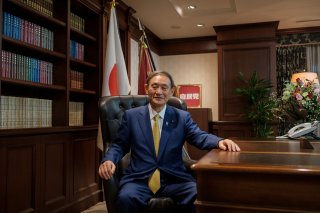 Secretary of State Mike Pompeo’s trip to Tokyo this week underscores the importance of the U.S.-Japan relationship and the administration’s political judgment that there is a relatively good foreign policy narrative to be told. Conversely, Pompeo’s canceled travel to South Korea, which last hosted the secretary two years ago, and to Mongolia, highlight destinations not helpful to President Donald Trump, who has contracted the coronavirus weeks before a re-election contest he is expected to lose.

In Tokyo, Pompeo is tying up loose ends. He will in short order place emphasis on the cornerstone bilateral alliance with Japan. He will also hammer home a burgeoning coalition of Indo-Pacific industrial democratic nations—India, Australia, Japan, and the United States—as a response to an increasingly assertive China.

If Pompeo is in a hurry to make a closing argument on behalf of the Trump administration’s foreign policy, Prime Minister Yoshihide Suga is preparing to build his distinctive imprimatur on policy. After eight years as chief cabinet secretary, Suga was elevated to the leadership role in mid-September after a chronic health issue forced Shinzo Abe to step down. He is just beginning to chart his course.

A Japanese proverb holds that “continuation is power” (keizoku wa chikara nari): Suga will demonstrate power’s continuation; as Trump lags in the polls and after a disgraceful presidential debate, Pompeo is likely to soon demonstrate the discontinuation of power. Or, at least, the Secretary may be thinking beyond short-term prospects.

In late 2016, Pompeo, then a Tea Party congressman, leaped at the chance to lead the Central Intelligence Agency when president-elect Donald Trump offered it to him nearly four years ago. In March 2018, after Trump fired Secretary of State Rex Tillerson by tweet, Pompeo happily moved to Foggy Bottom, taking with him the collateral duty of outreach to North Korea’s Kim Jong-un.

With one eye always focused on future political prospects, Pompeo has never shied away from making headlines. Few other senior officials inside the Trump administration have been so willing to promote the president’s interests. In the final weeks before the 2020 U.S. presidential election, Pompeo twice broke precedent by crossing the line between foreign policy and domestic politics. First, with the Old City of Jerusalem as background, Pompeo beamed remarks to the Republican National Convention on the White House South Lawn. Second, inside the State Capitol in Madison, Wisconsin, he delivered a politically-charged foreign policy speech in an election battleground state.

In Tokyo, Secretary Pompeo will be able to reinforce Trump’s most successful alliance—with Japan.  In addition, Pompeo’s rendezvous with other foreign ministers at a meeting of the Quad democracies, formally known as the Quadrilateral Security Dialogue, comprising the United States, Japan, India, and Australia, will accentuate the U.S.-Japan support for a free-and-open Indo-Pacific region. An aggressive China has catalyzed the four powers to meet more frequently and consider concrete steps ranging from cooperation on maritime situational awareness to high-standard development. The four foreign ministers may be thinking about enlarging the grouping into a Quad-plus arrangement.

The cornerstone and the Quad are happier topics for Pompeo than a White House that has become a Covid hotspot of its own. But the November 3 election rapidly approaches, and hence American diplomacy is once again seen in the region to be distracted and in big hurry.

While the diplomacy in Tokyo is unlikely to register as more than just a photo-op for most Americans, it will not be for Pompeo’s lack of trying. The discussions will be spun in the United States as symbols of Trump’s putative foreign policy successes: checking China and building a free-and-open Indo-Pacific region while keeping the peace on the Korean Peninsula. Proponents will hold up these meetings as evidence of Trump’s mastery of realpolitik; critics will decry Trump’s regional strategy as incoherent, erratic, and hyperbolic. The reality may be somewhere in between, but the Trump brand has been toxic in the region and undermined America's stature. Two surveys support this tarnished image of the United States. First, Trump’s handling of the pandemic has undermined America’s reputation globally, and even at home nearly three out of four view the president as having failed to take the virus seriously.  Even before the coronavirus became a national security threat, Trump’s emphasis on “America first” and opposition to multilateralism, among other things, had blotted America’s reputation. For instance, a survey of Southeast Asian elite opinion documented rising concern about U.S. reliability and staying power.

One cliché of contemporary foreign policy is that U.S.-China ties are the most consequential relationship in the twenty-first century. There is no denying the importance of Sino-American relations when it comes to matters of war and peace.  However, if one considers the United States and Japan's economic weight, two democracies heavily invested in the current rules-based order, it is not a stretch to argue that the U.S-Japan alliance is the most crucial bond between two countries on the planet. If Washington and Tokyo severed their relations tomorrow, then Japan would have to take drastic steps to safeguard its security, and the United States would be a vastly diminished power in East Asia. The vacuum of power would be immense.  Additionally, while it is notoriously difficult to shape China’s decisionmaking, few issues exist on the regional and global agenda that cannot improve through concerted U.S.-Japan cooperation.

That is why Pompeo’s meeting with Suga and his key officials is fraught with implications, even though these talks will be overshadowed in the United States by the theater of domestic politics—now including concerns for the health of the president and those around him.

Tokyo may be the venue for Pompeo’s final summation on behalf of four years of the Trump administration’s regional policy. Yet Tokyo also may be the location of Suga’s opening statement to define the next phase of Japanese foreign policy.

When the seventy-one-year-old Suga replaced Abe, he swiftly announced his intention to carry on with his longtime political boss's policy agenda. Suga singled out the importance of a robust U.S.-Japan alliance, an objective Abe held as the central pillar around which Japanese foreign and defense policy would pivot. Suga’s initial pronouncement emphasizes continuity, but his subtle policy shifts are likely to become more apparent with the changing currents of international affairs.

Although Americans singularly focus on the election, the November vote looms large for most countries, especially Japan. At the center of power in Japan, there is a general expectation that Vice President Joe Biden assumes the presidency. If Abe was the brilliant “Trump whisperer,” then Suga has learned valuable insights into managing America’s pendular political swings. There is no shortage of appetite in Tokyo and throughout the region for a more predictable style of U.S. foreign policy.

Even in our era of disruptive politics, style and nuance still matter in foreign policy. After all, the main goals of the U.S.-Japan alliance remain fixed: deterring military aggression as defense capabilities become more autonomous and move undersea and deeper into the domains of cyberspace, space, and the electromagnetic spectrum; countering coercive activities and political warfare; retaining the alliance edge in critical technologies; adapting and shaping a favorable international order.

Japan is rightly concerned with the precarious situation in the East China Sea. China has gradually ratcheted up the pressure to deny Japan’s sole jurisdiction over the Senkaku Islands. Japan rightfully regained the islands’ administration as part of the U.S. reversion of Okinawa a half-century ago. But the Chinese claim that the Diaoyu Islands had been under their control since the Ming and Qing dynasties until Japan pried them away with the 1895 Treaty of Shimonoseki. Xi Jinping has long-term global ambitions, and he has made it abundantly clear that China will never allow another actor “to split any part of Chinese territory,” a pledge that assumes suzerainty in its so-called near seas. “Unification” of all Chinese-claimed territory by the PRC’s centenary in 2049 is a crucial step towards the great rejuvenation meant to signal China’s full reemergence to center stage after suffering its role as the weak man of Asia during the “century of humiliation.” While the Chinese historical narrative contains much truth, Beijing hews to a rigid party line in which China is the permanent victim; in reality, the script in Asia has long since flipped, leaving most of China's neighbors wary about having to accept their equivalent of unequal and coercive agreements.

Japan has no intention of bending on its claim to the Senkaku Islands. China hopes to drive a wedge between the United States and Japan while also slowly grinding down Japan’s ability to manage China’s swarming tactics. Now that China boasts its own global satellite navigation system (BeiDou), Beijing can mobilize civilian fishing fleets for what amounts to maritime harassment operations designed to overwhelm the able but finite Japanese Coast Guard. It turns out that possessing the technical ability to deliver prompt alerts and precise geographic coordinates to dispersed civilian vessels, backstopped by the China coast guard and the PLA Navy, provides China with more than just an ability to avoid typhoons. Suga knows that Beijing will keep upping the ante on Tokyo.  He also knows that Japan’s strong alliance with the United States, growing national capabilities, and extended security network of like-minded countries are essential counters to China's gray-zone tactics in the East China Sea.