U.S.-China Competition and Washington’s Case for ‘Quad Plus’ 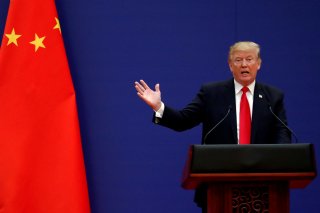 The supremacy of the United States in world politics is increasingly being challenged by Xi Jinping’s China. Beijing’s confrontation with Washington in the economic domain, the Chinese Navy’s continued adventurism in the South and East China Sea even amidst the coronavirus pandemic, Chinese posturing against key U.S. allies and partners such as Taiwan, Japan, Australia, and India, coupled with the country’s increasing technological prowess are raising questions about the United States’ status as the preeminent superpower.

The protection and maintenance of the existing U.S.-led global order has become Washington’s foremost strategic endeavor as a revisionist China seeks to challenge this status quo, to emerge as an equally dominating world power—perhaps one that could be more powerful. This contest has pushed the United States to actively develop coalitions with countries that have a shared interest in preserving the current liberal international order. The most widely discussed of these groupings is the Quadrilateral Security Dialogue or Quad, comprised of the United States, India, Australia, and Japan. But in recent months, Washington has begun exploring a new framework for Indo-Pacific cooperation, dubbed the “Quad Plus.”

Its origins trace back to March 20, 2020, when U.S. Deputy Secretary of State Stephen Beigun initiated a weekly online meeting with his counterparts in India, Japan, Australia, Vietnam, South Korea, and New Zealand to exchange views on and coordinate responses to the coronavirus pandemic. Less than two months later, in a higher-level meeting, Secretary of State Mike Pompeo held a videoconference with the foreign ministers of India, Australia, Japan, Brazil, Israel, and South Korea. During the virtual meeting, he stressed, among other things, the importance of transparency and accountability in countering the coronavirus. Various calls featuring both these configurations have happened since that time. This U.S.-led engagement is not just a mechanism to trade best practices to address a common challenge, develop resilient supply chains, or pool efforts and expertise to develop a coronavirus vaccine. Rather, to an extent, the United States views this coalition of like-minded countries from the prism of its competition with China and sees it as a way to reemphasize its leadership in the Indo-Pacific region by building on increasing global concerns about dependence on Beijing.

A rethink of U.S.-China relations was already underway in Washington much before the outbreak of the coronavirus, but it has accelerated in the post-pandemic environment. The Trump administration’s 2017 National Security Strategy asserted that China seeks to “challenge American power, influence, and interests” while the 2018 National Defense Strategy termed Beijing a “strategic competitor” that is looking to attain “Indo-Pacific regional hegemony in the near-term and displacement of the United States to achieve global preeminence in the future.” Deteriorating trade ties driven by U.S. concerns over the trade deficit with China as well as intellectual property theft by Chinese companies further complicated the bilateral relationship. In this environment, China’s lack of transparency on the outbreak of the coronavirus and the threat the virus posed heightened U.S. distrust of Beijing. In fact, as articulated by various U.S. officials recently, the Trump administration has reached the conclusion that President Richard Nixon’s rapprochement with Beijing in 1972 and subsequent U.S. engagement to encourage economic and political openness within China has “failed.” Now, Washington seeks to “demand fairness and reciprocity” from China potentially with the support of a “new grouping of like-minded nations.”

Given this backdrop, the United States’ bringing together a group of Indo-Pacific democracies to tackle a problem that Washington sees as created by China is a way to demonstrate its leadership of the Indo-Pacific region. Though the U.S. government’s domestic response to the virus has been grossly inadequate, Pompeo’s State Department has actively tried to cast the United States as “leading the global response” to the coronavirus in terms of foreign aid while calling Chinese contributions “paltry.” In addition, by pushing for an independent review of the origin of the coronavirus as part of this Quad Plus cooperation, the United States seeks to create the narrative of China as an irresponsible actor.

Washington may even find the current circumstances opportune to build a reliable coalition to balance against China’s rise, and this Quad Plus framework is likely a part of that vision. While most countries in the Indo-Pacific region have long harbored concerns about Chinese military modernization, its territorial aggression towards neighbors, and its disregard for international law, countries such as India and Australia were still largely pursuing a hedging strategy between Washington and Beijing. However, China’s mishandling of the coronavirus, its attempts to unilaterally change the status quo at the border with India, and its economic coercion of Australia in the post-coronavirus environment, whether driven by insecurity or opportunism, have led to a hardening of threat perceptions of China in these countries, making them more willing to explicitly balance against Beijing. India, Australia, and Japan’s embrace of and active participation in the Quad Plus calls further highlight their growing endorsement of an American worldview. Their mutual goals of creating a free, open, and rules-based Indo-Pacific region in a realpolitik world require defending freedom of navigation, protecting sea lines of communication, and diversifying economic supply chains. The Quad and Quad Plus are focused on achieving these objectives.

The Quad Plus formulation is also important to Washington because it’s a step toward decoupling economically from China. Owing to market access and intellectual property theft issues, Trump’s focus on domestic manufacturing, and now the coronavirus, the United States is actively pushing U.S. companies to move production out of China. However, Washington needs other countries to become the U.S. warehouse instead. Countries like Vietnam and India, which are both a part of the Quad Plus initiative, are key contenders to fulfill this vision.

The Quad Plus framework may also be a way for the United States and other Quad members to explore complementarities of interests with other countries and enhance the Quad’s strategic leverage amid changing geopolitical equations. For instance, the inclusion of countries like Vietnam, South Korea, New Zealand, and Brazil, each of which have significant economic interdependence with China but are in their own way reevaluating their relationship with Beijing, shows the Quad’s efforts to expand its influence. The Quad Plus efforts to build resiliency and sustainability of vulnerable economies post-coronavirus overlap with the Quad countries’ initiatives to provide alternatives to predatory Chinese investments in connectivity and infrastructure projects in the Indo-Pacific. In this sense, the Quad Plus framework has natural synergies with the United States-Japan-Australia led Blue Dot Network (BDN), which seeks to promote an economic alliance framework focused on developing quality infrastructure that is “open and inclusive”, and is seen as a challenger to China’s Belt and Road Initiative.

With India’s post-Galwan reevaluation of China, Australia’s “wake-up call” vis-à-vis Beijing, a likely continuation of Abe’s policies in Japan under Prime Minister Yoshihide Suga, and the United States’ intensifying rivalry with China, the potential for Quad Plus is high. However, the idea of Quad Plus is still quite nebulous, and its fate uncertain. For one, if Joe Biden wins the U.S. election, then it is unclear if the Quad Plus dialogue will continue in its current form, although U.S. strategic competition with China and a focus on cooperating with key partners in the Indo-Pacific are likely to remain. Secondly, institutionalizing the Quad Plus is likely to be a difficult endeavor, not only because many of these countries have longstanding economic ties with China but also because articulating a shared purpose and identifying priorities may prove cumbersome. If they succeed, then the Quad Plus could be a mechanism for global recovery and stability in the post-coronavirus world.

Dr. Jagannath Panda is a research fellow and centre coordinator for East Asia at the Manohar Parrikar Institute for Defence Studies and Analyses, New Delhi. He is also the series editor for “Routledge Studies on Think Asia.” Akriti Vasudeva is a Research Analyst with the South Asia Program at the Stimson Center in Washington, DC.