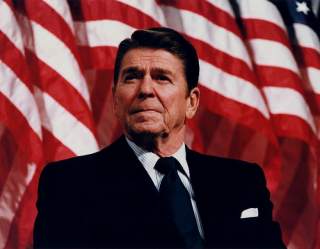 ON A steamy night in June 2004, I stood in line for almost seven hours on the National Mall, along with several thousand strangers. We were all waiting for our turn to enter the Capitol, where the body of Ronald Reagan lay in state. Since smartphones hadn’t yet been invented, I had nothing else to do during that time but to ask others what had prompted them to pay homage to the Gipper. Many were young—I met an entire fraternity that had driven up from North Carolina—and some weren’t even born when our fortieth president took office. But everyone there felt that Reagan had been a great president, that this was a historic occasion and that honoring his memory was, in some way, their duty as Americans. Reagan gave our country back its pride, several told me. He made us strong again. He revived the economy. He won the Cold War. Finally, we entered the hushed Capitol Rotunda, where Reagan’s flag-draped casket lay upon Abraham Lincoln’s catafalque, guarded by a member of each of the four armed services. No more than a minute later we were outside, and a bright dawn was breaking over Washington.

The only modern president whose passing inspired similar passion—aside from the special case of the assassinated John F. Kennedy—was Franklin Delano Roosevelt. And indeed, H. W. Brands, in his new Reagan biography, states, “What Roosevelt had been to the first half of the twentieth century, Reagan was to the second half.” While the world is awash in Roosevelt biographies, however, Brands’s is one of the comparatively few cradle-to-grave Reagan biographies. The antipathy of liberal academics may have something to do with the paucity of such accounts, but the more likely reason is that Reagan had a full career in entertainment and entered politics at a relatively late age; he was fifty-six when he first won public office and nearly seventy when he became president. When he died at age ninety-three, he had passed John Adams as America’s longest-lived president. It’s no small feat to cover Reagan’s eventful life in one volume.

Brands’s narrative cruises high above Reagan’s early years, picking out a few prominent features of the landscape. He covers Reagan’s midwestern boyhood in a flash, and then moves quickly through his radio career and on to his arrival in Hollywood in 1937. Brands doesn’t offer much in the way of analysis, but when he does he’s mostly convincing. Reagan never quite cracked Hollywood’s A-list, in Brands’s opinion, because he had a “narrow acting range and limited sex appeal,” a product of the reserve he acquired as the son of an alcoholic father.

Harbingers of Reagan’s future career, however, were evident in his yearning for a larger stage; his instinct for siding with the forces of order and conformity; his appetite for film-industry politics (he served as president of the Screen Actors Guild from 1947 to 1952 and 1959 to 1960); and his early opposition to Communists in Hollywood labor battles. His work as corporate spokesman for General Electric in the 1950s made him a television star, honed his public-speaking abilities and pushed him further on his rightward trajectory away from early New Deal enthusiasms. But, as Brands notes, when Reagan gave the 1964 televised speech on behalf of Barry Goldwater’s presidential campaign that kickstarted his political career, his closing peroration channeled FDR’s line about facing “a rendezvous with destiny.”

Despite being a political novice—and a Republican only since 1962—Reagan won the California GOP gubernatorial nomination in 1966 and went on to take the governorship with a million votes to spare. Californians liked Reagan’s conservative positions against big government, high taxes, urban riots, campus unrest and antiwar protest, and they reelected him (albeit by a smaller margin) in 1970.

BRANDS COVERS the events of Reagan’s life up until 1980 in the first third of his biography; the pace slows down considerably for Reagan’s presidential years. Up to this point, Brands had kept the spotlight almost exclusively on Reagan, with his backers and advisers (aside from Reagan’s second wife, Nancy) reduced to shadowy passing presences. Now he widens the aperture to include the full cast of the Reagan administration and the considerable feuds and palace intrigues they waged against each other.

Brands provides a straightforward history of Reagan’s first term as president, while paying particular attention to the implementation of his ambitious economic program, Reagan’s near assassination in early 1981, Federal Reserve chairman Paul Volcker’s recession-inducing efforts to scotch inflation, and the ill-fated effort to sell arms secretly to Iran in hopes of freeing hostages and funding the anti-Communist Contras in Nicaragua. In covering Reagan’s second term, Brands gives considerable space to the resulting Iran-Contra scandal, but his main focus is on Reagan’s negotiations with Soviet leader Mikhail Gorbachev and the summitry that led to the thawing of the Cold War.

Reagan is a notoriously difficult subject for biographers since, as Nancy observed, “He often seems remote, and he doesn’t let anybody get too close. There’s a wall around him.” His inner opacity seemed to drive his official biographer Edmund Morris half mad, as he resorted to fiction in an attempt to explain what made Reagan tick. Brands notes Reagan’s inscrutability, shrugs and moves on. He doesn’t resort to a fictionalized persona, cinematic staging or other elements of postmodern trickery, as many Reagan biographies do.

Brands’s overall attitude toward Reagan is quite favorable, although throughout most of the book he largely refrains from passing judgment. He gently chides Reagan for claiming, in his first memoir, that the Screen Actors Guild did not “point a finger at any individual” during his battles against Communists, since Reagan had in fact met secretly with the FBI and given them the names of suspected Communists. Brands also points out that, when Reagan put tax cuts ahead of spending cuts in his 1981 budget, “He proposed to lead America across an economic Rubicon,” breaking with the conservative ethos that had accepted tax cuts only as long as they didn’t increase deficits.

But in general, Brands salutes Reagan’s ability to restore Americans’ faith in themselves and their country, his relentless focus on shrinking government at home and defeating Communism abroad, and his matchless rhetorical gifts. He even suggests that Reagan’s lax managerial style was an asset, since it gave him plausible deniability when others did his dirty work for him, and that his refusal to mediate the disagreements among his advisers meant that he heard all sides of important arguments.

Brands hasn’t performed conspicuous feats of archival explorations, and his biography contains little in the way of hitherto-unrevealed sources, aside from some excellent interview quotes from the likes of James Baker and George Shultz. Only a fraction of the fifty million pages of official documents in the Reagan Library have been declassified. Brands’s extensive coverage of, say, the Iran-Contra affair seems to owe more to the fact that most of the documentation relating to it has been made publicly available than to its inherent importance.

What Brands does do, superbly, is give the reader Reagan’s own voice. He contends that “the most important source of information on Ronald Reagan is Reagan himself: his speeches, diaries, letters, and memoirs.” Brands reproduces lengthy and often-unmediated excerpts of Reagan writing and speaking in a wide variety of contexts, including his 1947 testimony before the House Un-American Activities Committee, his letter to a friend about his personal experiences of sex and love and marriage, his career-launching speech on behalf of Goldwater, his private memos, his press conferences, his cabinet meetings and transcripts of his first encounter with Gorbachev at Geneva.

The comedian Phil Hartman parodied Reagan in a memorable Saturday Night Live sketch as a razor-sharp political mastermind affecting a public image as a befuddled old fellow. Reagan’s writings take the sting out of that portrayal by revealing his genuine intellect—although it’s true that his diaries do display a man so old-fashioned that he wrote the mildest of curse words as “h - - l” and “d - - n.” Some of the excerpts Brands includes are essentially primary texts. Readers can immerse themselves in, for example, Reagan’s May 1987 speech on AIDS and then decide for themselves if it showed an ignorant and uncaring president (as AIDS experts charged) or a man who was so accepting of homosexuality as to make it seem normal (as conservatives claimed).

WHILE BRANDS doesn’t try to relate Reagan to political developments that followed his passing, many readers inevitably will measure the likely contenders for the 2016 Republican presidential nomination against Reagan’s example. And while all of the contenders are bound to proclaim themselves Reagan Republicans, this biography clearly demonstrates that none of them really are.

Part of the difficulty these candidates will have in filling the Gipper’s shoes is that they lack his political longevity and prepresidential standing. Reagan first ran for president twelve years before he was elected; some of the current candidates were barely out of school a dozen years ago. By 1980, Reagan was a household name to most Americans, a long-established officeholder and presidential contender from the nation’s largest state, and the principal political spokesman for conservatism across two decades. None of the 2016 candidates will have anything close to that record.