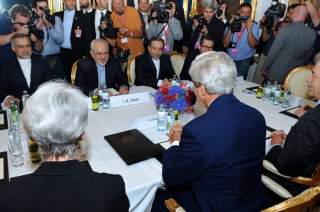 One of the lessons of statecraft is that mistakes tend to compound themselves. Good options disappear and bad ones proliferate. The hole is dug deeper because desperation convinces you to contemplate options that would never have been considered in better times.

This is what I fear may happen next in Iraq. Because we have so few good options, the Obama administration may think it’s time to start thinking about making a “grand bargain” with Iran over Iraq.

The “logic” may seem compelling. Both the United States and Iran consider ISIS a mortal enemy. We both oppose the destruction of the existing government in Baghdad. Indeed, Iran actually helped oust former Iraqi prime minister Maliki. And the Kurds have already indicated they’d be happy if Iran were to help them roll back ISIS in Iraq.

Meanwhile, we have something the Iranians want, namely, consent to their uranium-enrichment program, while they have something we could want—“boots on the ground” in the form of pro-Iranian Shiite militias inside Iraq that have already had a hand in stopping the Islamic State in Iraq and Syria’s thrust toward Baghdad.

It’s not as if this idea hasn’t been percolating for a while. Earlier this summer, three former top U.S. officials, Ryan Crocker, William Luers and Thomas Pickering, called for a “strategic relationship” between the United States and Iran. They ruled out an outright alliance, but said that “mutually informed parallel action is essential.”

The Iranians floated the idea of cooperation on Iraq back in June as well, prior to the deadline on the Iranian nuclear talks. There were brief and informal discussions between the Americans and the Iranians on linking the nuclear deal to cooperation on Iraq, but nothing official came from them. The Pentagon reportedly hates the idea, but if diplomats as experienced as Crocker and Pickering embrace it, I could see the State Department—and more importantly, the politicos in the White House—warming to it as a way to relieve pressure on sending more forces to Iraq.

Here is how such a deal could go down. It’s no secret that the Obama administration desperately wants a nuclear agreement with Iran. It’s a legacy thing. Moreover, President Obama has downplayed the possible use of military force, so there are not a lot of options left. Some sanctions have already been lifted on Iran, and yet Tehran not only missed a July deadline for reaching an agreement, it is stonewalling on cooperating with the International Atomic Energy Agency (IAEA).

Thus, talks are stalled, and the administration could end up thinking that if Iran won’t compromise, maybe it can help.

This is where Iraq comes into the equation. Promises of tacit cooperation on Iraq could be the salve that lubricates a deal on nuclear issues. In return for the United States relaxing demands on reducing the number of Iranian centrifuges and perhaps looking the other way as Tehran defies the IAEA, Iran could promise not only to push back ISIS, but to “help” stabilize Iraq. If Iran’s intervention in Iraq using Revolutionary Guards and surrogate Iraqi Shiite militias is successful, the administration’s thinking may go, that would ease the pressure to put U.S. “boots on the ground.”

There’s only one problem: It won’t work. A grand bargain with Iran over Iraq is an illusion. The Iranians don’t want the same things in Iraq that we do. They don’t want a unified, stable Iraq. They want an Iraq dominated by them and their Shiite allies. They do indeed want relief from Western sanctions, but they don’t want a strategic partnership with the United States. They thrive on the conflict with the West, and there is no evidence that they really want to forgo a nuclear-weapons program permanently in return for an end to their international isolation.

We could thus lose on two fronts. The Iranians get a green light to pursue their nuclear program while at the same time enjoying U.S. approval for their rising preeminence inside Iraq and the region. Talk about shortsighted! Working even tacitly with pro-Iranian Shiite militias inside Iraq is tantamount to throwing fuel on the fire of the civil war that is already raging.

We’ve made enough mistakes already. Let’s not double down and make another one by trying to work with Iran.

Kim R. Holmes is a Distinguished Fellow at The Heritage Foundation, a former assistant secretary of state, and the author of “Rebound: Getting America Back to Great.” You can follow him on Twitter: @Kimsmithholmes.