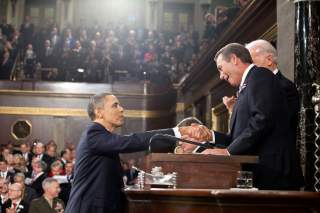 Anyone who reads President Obama’s new “National Security Strategy,” might come away believing that six years ago American embarked on a successful course of world leadership. They might believe we’d succeeded, as a superpower must, in reducing the danger we and our allies face and by spreading stability around the world.

The truth is precisely the opposite. America’s foreign and defense policies are weak and in disarray. The world has grown far more unstable in the past six years as a result of the president’s failure to lead, his policies and his consistent practice of restraining America’s influence around the world.

To recover from these mistakes, we need a forward-looking foreign policy, based on American values, that recognizes we can be neither isolationist nor reliant on other nations’ respect for the “rules-based international order” advocated by Obama but ignored by most of the world.

For nearly four centuries, “world order” has meant nations mutual respect for national sovereignty. This, however, has often been threatened. In the 20th Century, the bloodiest in history, it was challenged from beginning to end by dictators and despots. America, in two world wars and since, has sought to defend its freedoms, values, and culture. With the help of our allies, we have done so to the great benefit of mankind.

Our new century is already posing threats as great as those we faced in the last one. “World order” evolves constantly and is today threatened by revolutionary powers such as Iran, by terrorist ideology, by nations seeking to impose their rule over free peoples and more.

To successfully preserve freedom and prosperity for our children, we first have to regain confidence in our values, our culture and ourselves. Liberal politicians and pundits are eager to proclaim the decline of the United States and the West. There is some truth in that because many are timid in their defense of our culture and our values and often seek to undermine them. We suffer from an Obama-induced malaise that has diminished Americans’ confidence in ourselves and our Constitutional system of government.

We can and must recover from that malaise but that can only happen if our next president is willing and able to lead us in the right direction by creating the proper domestic and foreign policies and by correcting the many mistakes that have been made over the past decade.

We must not shy away from defining the world we seek in the 21st Century, and reaffirming the value of American leadership to achieve that vision. I believe that American safety and security depends on the successful defense of Western values. They are universal human values to which all civilized peoples aspire. We must defend ours, and our allies’, with pride, confidence and strength.

We need a new and active foreign policy to shape events and the course of history. This requires full engagement of all of the elements of American power: diplomacy, economic power, military force and the great power of our ideals.

America has the right, and the duty, to defend and advance those ideals. Our freedoms and culture make us exceptional among nations, giving us the legitimacy to challenge ideologies that attack ours, and the cultures that oppose our values. America is, as both Abraham Lincoln and Ronald Reagan said, the "last best hope” of mankind.

The desire for advancement is emerging worldwide among all peoples, and only western values can deliver on those aspirations. The values defined in the American Declaration of Independence are universal and still shine a bright beacon of hope for the entire world.

The geopolitical outcome we seek must be defined by the freedoms and stability that enable us and our allies to prosper in peace. That outcome does not tolerate any ideology or power that threatens those freedoms and that prosperity. We have to make judgments based on that goal and turn all our diplomatic, economic and – at times— military power in support of those judgments.

We must take our initiatives beyond our homeland because in the modern world of rapid transportation and instant communication, threats can arise all too quickly.

To recover our ability to defend our freedom and that of our allies, we need to restore America’s influence over important world events. Isolationism will only leave the field open to our adversaries and will inevitably lead to war. Equally wrong is the neoconservative theory that seeks to impose democracy where it isn’t wanted and leads us to squander our resources and power. There needs to be a middle ground that enables America to shape world affairs and control our own destiny.

First, our foreign policy should be closely interwoven with our national defense and economic policies. Properly formulated, each would complement the others.

Second, U.S. foreign policy has to be constructed around strategies and initiatives undertaken only after careful deliberation of the foreseeable consequences, four or five moves up the chess board. We have to anticipate how our adversaries and allies will respond to each initiative. Because Obama has pursued his initiatives in willful disregard of facts on the ground and the clearly foreseeable consequences, we have lost much of our credibility among nations and with it the ability to influence important events.

Our loss of credibility— and with it our superpower influence— has led directly to highly dangerous developments in the Ukraine, Iran, Iraq, Afghanistan and across the Middle East. Too many of our allies (including the Saudis and Israelis, both of whom have been vocal in rejecting Obama’s actions) have divorced themselves from Obama’s policies. Too many of our allies, especially Israel, have been damaged by his actions. Diminished credibility and miscalculation based on false threats— such as Obama’s “red line” in Syria— only increases instability and ultimately leads to unnecessary war.

Third, our next president has to have honest discussions about foreign policy— and national security policy— with the American people. When major decisions are to be made, such as Obama’s earlier strategic arms agreement with Russia and the nascent nuclear deal with Iran, the president should explain to Americans why his important decisions benefit our national security. If he cannot, the action should not be taken. This is an essential part of leadership that Obama has never displayed.

How we implement these principles is essential to their success. Applied indiscriminately, we would further undermine the American public’s support— and that of our allies— for the long term policy’s success. The extension of liberty can only succeed in cultures where universal Western values are generally accepted. Attempts at nation-building where cultures of religious intolerance and nationalism are elevated above personal freedom are unlikely to succeed no matter how much American force is applied or how long we persist.

Because of the loss of public support during the Afghan and Iraq wars, the stage was set for Obama’s doctrine of restraining U.S. influence.

The pronouncements of every American president have the burden of defining the role of our great democracy in defending the world’s stability and order. Yet President Obama went to Cairo early in his administration and apologized for American leadership. He has, regardless of the risks, extended his diplomacy to appease Iran. The president sent a very dangerous message of American weakness when he went to West Point and told the graduating cadets that he would not put them in harm’s way in a manner that caused “local resentments.”

The president spoke at the National Prayer breakfast on the heels of ISIS burning a Jordanian pilot to death in a cage. There, he compared that modern day Islamist atrocity to Christian conduct in the Crusades nearly 1,000 years ago. That was the worst statement I have heard a president make in my lifetime. It’s time for a president who understands America’s historic role in the world and isn’t so ashamed of America that he will not advocate it.

This new American foreign policy cannot be accomplished without restoring the dynamic nature of our economy.  The well-being of the American people demands an economy with more and better jobs, higher wages and paths to decent careers that offer the opportunity for self realization and financial independence from government. The new American foreign policy must be backed by the money to invest in defense, new technology, transportation, and financial influence.

There, too, must be a change. Economic growth must become our primary domestic mission. This can be done by liberating Americans to fully engage in our free enterprise system. Every economic initiative of the past six years has furthered the interest of government at the expense of economic growth and opportunity. President Obama apparently doesn't believe in Americans’ ability to advance their own success.

Ronald Reagan sounded a certain trumpet that proved again the powerful rightness of Western values when he said, “Mr. Gorbachev, tear down this wall.” That is the sort of speech every president should direct at our enemies.

Our new economic policy must be based on policies that have been historically proven to create growth, not the sort of government spending spree that Obama has given us. There should be tax cuts across the board, including a reduction of taxes on all commercial activity to 15 percent, the elimination of the death tax, and others aimed at spurring investment and job growth. John F. Kennedy cuts taxes and fostered growth in 1961. Ronald Reagan cut taxes in 1981 and the economy dramatically grew to the benefit of all Americans. We need to follow those models back to prosperity.