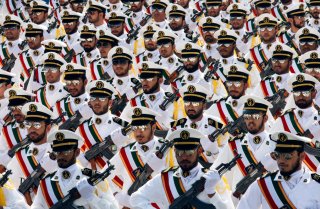 The negotiations with Iran over a nuclear deal are stalled over one main issue: Tehran is insisting that its Islamic Revolutionary Guard Corps (IRGC) be removed from the Foreign Terrorist Organization (FTO) list maintained by the U.S. State Department and that terrorism sanctions against the entity be dropped as part of a nuclear accord.

While it seems that the United States hasn’t given in yet, there is cause for concern. Over the past year, at least three different sets of sources—including official Iranian government reports, leaks to former U.S. government officials allegedly by career staff, and various scoops and media stories—have all claimed that the Biden administration would delist the IRGC as part of what is increasingly appearing like a lesser version of the 2015 nuclear deal known as the Joint Comprehensive Plan of Action (JCPOA). This is despite views shared by then-candidate Joe Biden as well as early appointments to his cabinet about the need to check Iran-backed terrorism and enforce terrorism penalties.

Failing to vigorously enforce existing U.S. sanctions (such as those related to oil) on the Islamic Republic has already put Washington in a tight spot in the nuclear negotiations and greenlit Iran’s nuclear escalation and extortion. But removing terrorism sanctions on the engine of the Islamic Republic’s terror-sponsoring apparatus would be pure strategic folly.

Why is this so? To begin with, the IRGC was created four decades ago as a parallel military force to the national army. As analysts have said, the army protects the state, but the IRGC protects the revolution. In the ensuing decades, the IRGC has become a powerful, and perhaps the most powerful, player inside the Islamic Republic. In addition to having a reported 190,000 members, the IRGC has countless veterans and supporters across Iran’s political, social, religious, military, educational, and economic institutions. The closest analogy is to the Soviet KGB at the height of its powers.

The IRGC has engaged in or supported acts of terrorism, kidnapping, or regional destabilization across multiple continents throughout its existence and has been at the forefront of the Islamic Republic’s efforts to “export” its revolution. The IRGC is the chief military unit responsible for Iran’s foreign operations, with branches like the Quds Force (IRGC-QF) that train and equip proxies to target U.S. military personnel, interests, and partners. During the Iraq War (2003-2011) for example, Iran, through the IRGC and its proxies, was assessed as being complicit in over 600 U.S. fatalities and thousands of injuries. This means that a reported one in six U.S. deaths during the Iraq war can be traced to the IRGC-QF, directly or indirectly.

Another IRGC branch, the Aerospace Force (IRGC-AF), is responsible for the biggest ballistic missile strike against American troops: a January 2020 barrage against unprotected U.S. positions in Iraq. The IRGC-AF is in charge of Iran’s ballistic missile arsenal, which is the region’s largest. Iran continues to develop, test, transfer, and even use ballistic missiles in military operations.

The Trump administration rightly designated the IRGC and all its branches in April 2019 as an FTO, ending a decade-plus long debate in Washington over whether part or all of the IRGC (because it is a government entity) could be sanctioned for supporting terrorism. The Trump administration first sanctioned the entire IRGC under different counterterrorism authorities in October 2017 pursuant to an act of Congress. Prior to that, the IRGC was sanctioned by the Bush and Obama administrations under various executive orders for its support for weapons of mass destruction and ballistic missile programs (2007) as well as human rights violations in Iran (2011) and Syria (2012).

But the FTO designation is qualitatively different. For starters, unlike the counterterrorism executive order, the FTO designation contains a visa ban provision restricting the travel or immigration of current or former IRGC personnel to the United States. There is also greater room for legal action against the IRGC because the FTO listing carries with it a different standard of evidence for the provision of “material support.” Furthermore, the FTO designation provides for a wider or extraterritorial net to target those providing material support to the IRGC, even if it occurs outside the United States. The FTO penalty also permits victims of IRGC terrorism a private right of action in federal courts to hold the Guard Corps accountable. If the Biden administration removes the IRGC from the FTO list, Americans who have been the victims of IRGC terrorism will face impediments to collecting the damages they are due.

The FTO designation is, therefore, America’s most powerful counterterrorism authority and has been singled out by Tehran for that reason. Iran is unlikely to have jeopardized a nuclear deal that stands to free an estimated 130 billion dollars of frozen assets over the revocation of a designation that some chalk up to being mere “symbolism.”

When combining the prospects of a delisted IRGC with a lapsing nuclear deal, the picture gets worse. Unless significantly amended, the nuclear deal will free the IRGC in Europe, creating sanctions coordination issues for the transatlantic community on the back end of any new deal. Per the JCPOA’s implementation plan, the EU is slated to remove a host of entities from its sanctions lists, including the IRGC, the IRGC-QF, and IRGC-AF in October 2023, just over a year from now.

What’s more, the IRGC controls an estimated 30 percent of the Iranian economy. Along with a host of entities tied to the worst actors in Iran, the Guard Corps were among the main economic beneficiaries of the 2015 deal. These actors remain in prime position both in Iran’s politics and economy to benefit yet again from prospective sanctions relief. For example, in 2020, the Treasury Department highlighted that the IRGC-QF was a major beneficiary of illicit oil sales by entities like the National Iranian Tanker Company (NITC) and National Iranian Oil Company (NIOC). Both are likely to receive some form of sanctions relief under a new nuclear deal and will once again be well-positioned to underwrite Iran’s terrorism apparatus.

Lastly, removing terrorism sanctions on an entity that retains the capability and intent to carry out terrorism and has American and allied blood on its hands will not bode well for future U.S. counterterrorism or Middle East policy. Several former U.S. officials, including former Secretary of State Mike Pompeo, require costly round-the-clock security because the IRGC is trying to kill them. The IRGC is even calling on Americans to engage in domestic terrorism. How can the United States remove the IRGC from the FTO list while it is trying actively to assassinate American citizens? And what would that removal say about whether Washington has a serious counterterrorism program?

Should the administration drop terrorism sanctions on the IRGC, Iran’s constellation of militias in Iraq that forms a key part of its “Axis of Resistance” are likely to double down on rocket and drone attacks against U.S. positions rather than lay down their arms. It would be illogical for Iran’s proxies to see their patron garner sanctions relief through escalation and not aim to replicate Tehran’s resistance model. Washington need not look further than Yemen to see how the Iran-backed Houthi rebels have already stepped-up their missile and drone attacks on Saudi Arabia and the UAE in the aftermath of their FTO designation revocation.

Deal or no deal with Iran, retaining and enforcing America’s most significant counterterrorism authority against the long arm of the world’s foremost state sponsor of terrorism remains in the national security interest of the U.S. Removing the IRGC from the FTO list will endanger American lives.

Elliott Abrams is a senior fellow at the Council on Foreign Relations (CFR) and the chairman of the Vandenberg Coalition. He most recently served as Special Representative for Iran and Venezuela at the U.S. State Department.

Behnam Ben Taleblu is a senior fellow at the Foundation for Defense of Democracies (FDD) where he focuses on Iranian political and security issues.