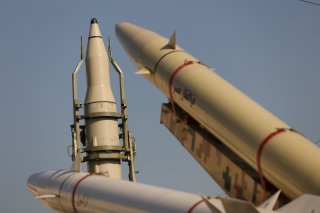 At 1:20 AM local time on March 13, 2022, Iran launched between ten to twelve short-range ballistic missiles (SRBMs) from its territory against an alleged Israeli facility near the U.S. consulate in Erbil in Iraqi Kurdistan. The attack, which reportedly took place at the same time as a January 2020 U.S. drone strike that killed Iran’s infamous Islamic Revolutionary Guard Corps Quds-Force (IRGC-QF) commander in Iraq, may have ended in a matter of moments but should have been seen coming long ago.

The strike on Erbil was the Islamic Republic’s fifth operation in recent history launched directly from Iranian territory against a foreign target, employing ballistic missiles, and being publicized or attributed to as coming from the IRGC. This troika is likely to feature in future Iranian military operations as its hesitation to using overt and attributable force in the Middle East continues to shrink.

Previously, Iran fired six SRBMs at Islamic State positions in Syria in June 2017, seven SRBMs at Kurdish opposition positions in Iraq in September 2018, another six SRBMs at the Islamic State in Syria in October 2018, and sixteen SRBMs at bases housing U.S. forces in Iraq in January 2020. Prior to the 2017 strike, Tehran had not launched ballistic missiles from its territory at foreign targets since 2001.

Iran has framed each of these strikes as “retaliatory” and as responding to threats—both real and perceived. Tehran’s largest launch—the January 2020 combination of sixteen liquid- and solid-propellant surface-to-surfaces missiles—was framed as making good on its much-promised “hard revenge” against Washington for the targeted killing of its aforementioned IRGC-QF commander. While there were no U.S. fatalities in the strike, over 100 American servicepersons suffered traumatic brain injuries, thirty-nine of whom are approved to receive purple hearts. The strike was reported by U.S. media as the “largest ballistic missile attack against Americans ever.”

Iran and its proxies have taken to framing the recent attack as a success against Israel even as debates continue over the strike’s intended target and the proximate cause. Pro-Iran militias in Iraq proclaimed that Tehran attacked an Israeli facility purported to be behind a drone strike on Iran this February. Israeli outlets have since reported that the alleged February attack was against an airbase housing the regime’s drone fleet. An IRGC source only partially confirmed this, framing Iran’s attack as a response to Israeli threats emanating “from Iraqi soil.” The source also named the missile used in the operation: a single-stage solid-propellant SRBM dubbed the “Conquerer-110” or “Fateh-110,” in Persian. If the IRGC thesis about responding to Israel is to be believed, then the strike is also likely to have been Iran making good on threats of revenge after Israel killed two IRGC colonels in Syria earlier this March.

Regardless of spin, the pattern of strikes reveals an important dyad driving Iran toward more missile use: real advancements in its ballistic missile program and sticky perceptions of declining U.S. resolve to counter Iran.

Iran’s ballistic missile arsenal is routinely described by U.S. intelligence as being the largest in the Middle East, and most recently assessed by the outgoing U.S. CENTCOM commander as “the greatest threat to the region’s security.” Tehran has been busy making qualitative improvements to these systems to grow the range, accuracy, reliability, and survivability of its missile forces, as well as making other strides such as in the field of solid-propellant motors. The Fateh-110, for instance, is Iran’s oldest solid-propellant SRBM. It has been upgraded numerous times to increase its range, payload, and accuracy and is among Iran’s most battlefield-ready systems. The Fateh-110 or its variants have been a part of all five aforementioned missile operations.

At the same time that Iran’s missile capabilities are evolving, officials in Tehran increasingly perceive Washington’s staying power in the Middle East as waning, as well as American resolve to use force to counter Iran or Iran-backed attacks as declining. Iranian officials bragged in 2018 that they struck positions within three miles of U.S. forces when the IRGC fired SRBMs into Syria. The United States also may have inadvertently sent a pale green light for more attacks when it did not meaningfully respond to the downing of its drone by Iran over international waters in June 2019 and an Iranian cruise missile and drone strike against Saudi Arabia’s key oil installations later that September.

But perhaps most poignantly in the minds of Iranian decisionmakers, Washington did not kinetically respond to Iran’s missile barrage in January 2020 against two bases housing American troops in Iraq. According to Iran’s supreme leader, the strike was a “blow to the dignity of the U.S. as a superpower.” America’s perceived willingness to absorb such a blow vindicated, in the eyes of Iranian elites, not only the deterrent power of Iran’s missiles, but according to the commander of the IRGC’s missile force, the importance of balancing what the regime may lack in military capability compared to a larger power like the United States, with greater resolve and the “will to use” such capabilities.

Taken together, these forces have pushed and will keep pushing Tehran towards more direct military engagement in the Middle East. To be clear, this does not imply that Iran is ditching its effective proxy warfare strategy. Proxy warfare remains Iran’s most cost-efficient way to fight in a theater and control escalation dynamics while limiting kinetic reprisal and blowback against its homeland.

Rather, the Islamic Republic is layering on a new component to its security strategy. Instead of proliferating systems abroad, it is launching them from Iranian territory. And rather than covet secrecy, the IRGC is seeking the limelight. This is probably the impost important but under-appreciated development in Middle East national security matters over the past half-decade. And its consequences could meaningfully alter the regional balance for much longer.

So long as Iran engages in cost-free ballistic missiles operations, it will continue to overlearn lessons about the deterrent, coercive, and punitive power of its missiles. Such confidence could easily beget overconfidence and miscalculation and lead to a region-wide war. But the most important lesson is for the here and now. Whereas Iranian taunts were once easy to write off as hyperbole or bluster, future threats or promises of revenge will have to be measured against the question: would Tehran launch ballistic missiles over this?

Behnam Ben Taleblu is a Senior Fellow at the Foundation for Defense of Democracies (FDD) where he focuses on Iranian political and security issues. He is the author of a forthcoming monograph on Iran’s ballistic missile program.