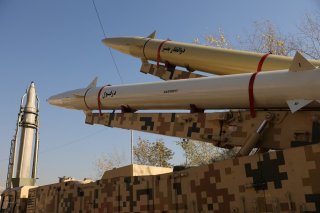 One might be forgiven for missing a statement this January by Iran’s Islamic Revolutionary Guard Corps Aerospace Force (IRGC-AF) commander Amir-Ali Hajizadeh heralding the successful test of a solid-propellant motor for a carrier rocket. After all, amid renewed attacks by Iran-backed Shiite militias in Iraq and Syria against U.S. positions, missile attacks by Iran-backed Houthis in Yemen against an American base in the United Arab Emirates, and marathon nuclear diplomacy in Vienna, technical news related to a new rocket motor might sound, at best, tangential to the current slate of security challenges related to the Islamic Republic.

Such a view would be misguided, however. Iran’s steady advancement in the field of solid-propellant now includes solid-propellant motors for space/satellite-launch vehicles (SLVs), accentuating the overall threat posed by the Islamic Republic. They are also an important indicator of Tehran’s evolving missile prowess and continuing interest in developing longer-range strike capabilities.

Initially misreported as the launch of an SLV, the latest revelation is proof that Iran’s new ultra-hardline president, Ebrahim Raisi, and his administration are kicking the country’s space program into high gear as promised. This likely means greater government and industry support to Iran’s space program and more frequent SLV tests, something Raisi believes generates “power and pride” and promotes deterrence. It also means that the technical advancements in the service of these tests will contribute to Iranian missile power.

Indeed, despite their differing approaches to Iran policy, both the Trump and Biden administrations have criticized Tehran’s space program and SLV launches due to the overlap in technologies that SLVs and intercontinental ballistic missiles (ICBMs) inherently share. European powers have not been far behind in expressing similar concerns about Iranian SLVs. According to the U.S. Defense Intelligence Agency, “Iran’s development of larger, more-capable SLV boosters remains a concern for a future ICBM capability.” And as expressed by the State Department, “Iran’s civilian space launch vehicle program allows it to gain experience with various technologies necessary for development of an ICBM – including staging, ignition of upper-stage engines, and control of a multiple-stage missile throughout flight.”

The newly tested motor produced by Iran’s IRGC is dubbed the Raafe. Some outlets have estimated that the Raafe weighs 12.5 tons, is 9 meters long, and 1.25 meters in diameter. This diameter size is the same as many of Iran’s medium-range ballistic missiles, like the Shahab-3 and its variants, the Ghadr and the Emad. The Shahab-3 engine, which is originally of North Korean origin, forms the basis for the first stage of Iran’s liquid-propellant SLVs like the Safir and Simorgh. The Simorgh was most recently launched in December 2021 and reportedly failed to put a satellite into orbit.

According to Hajizadeh, the Raafe was designed to power the first stage of an SLV and can allegedly generate up to 68 tons of thrust. Previously, Iran unveiled a smaller second-stage solid-propellant motor in 2020 called the Salman, which was used in combination with a liquid-propellant first-stage engine and a solid-propellant third-stage motor in the Qased SLV and was tested by the IRGC in April 2020. In January 2021, Iran reported it had tested another SLV featuring an unknown/unnamed solid-propellant motor in its Zuljanah SLV.

Despite their difference in size, the Salman and the Raafe share several critical similarities. First, both are developed by Iran’s IRGC rather than the “civilian” face of Iran’s space program, which is supported by sanctioned entities like the Iranian Space Agency, the Ministry of Defense, and its subsidiary, the Aerospace Industries Organization. This in turn affirms the theory of parallel space programs in Iran. Second, both the Raafe and Salman are produced using non-metallic composite motor casings which, although more challenging and costly to produce, result in an overall lighter rocket that can lift heavier payloads. Third, both motors employ thrust vectoring through flexible nozzles that can move mid-flight. A rocket controlled by thrust vectoring is ideal for a larger long-range strike weapon like an ICBM.

Iran has spent the past two decades making significant gains in the realm of solid-propellant ballistic missiles to include domestic motor production and testing, as well as propellant production. In this time, Iran has also developed and upgraded an entire class of single-stage, solid-propellant short-range ballistic missiles originating from the Fateh family. These variants include, but are not limited to, the Zulfiqar, which Iran employed in military operations against the Islamic State in Syria in 2017 and 2018; the Fateh-110B, which Iran used against Kurdish dissidents in Iraq in 2018; and the Fateh-313, which Iran employed alongside another missile against bases in Iraq housing American troops in 2020. Having proved their battlefield worth and demonstrating Iran’s embrace of solid-propellant systems, Hajizadeh elsewhere claimed that Iran is phasing out its older Scud-based Shahab platforms for the solid-propellant Zulfiqar.

A larger solid-propellant motor further bolsters Iran’s long-range strike ambitions by enabling the element of surprise. Iranian hardline media outlets heralded the Raafe as allowing the Islamic Republic to better catch its adversaries off-guard by requiring less preparation time before launch. Recall that when the IRGC first tested the Qased, it did so as a surprise launch and using a mobile launcher rather than a fixed launchpad. This was a significant source of concern for analysts who otherwise “disconnected the dots” between Iran’s SLV and missile programs. Traditionally, analysts have been able to use satellite imagery to see Iran preparing for the launch of its liquid-propellant SLVs days in advance.

Alluding to past motor developments when announcing the Raafe, Hajizadeh claimed that Iran could combine its efforts in this area to develop a full solid-propellant SLV and even test it next year. Such a development would mark a critical juncture in Iran’s SLV program and offer the regime the clearest path to date towards an ICBM capability that could one day target all of Europe or even the American homeland.

Working to prevent such a scenario might appear needless for those who believe Iranian officials when they claim Tehran is limited to a 2,000-kilometer range ban on its missiles per an order from the supreme leader. But a key lesson of the past four decades of Iran policy has been that taking the Islamic Republic’s word about its intentions is no way to deal with or thwart its evolving capabilities, be they missile, military, or nuclear. Others, particularly in the field of arms control and nonproliferation, understand the folly of merely trusting Iran to abide by this prohibition, and instead seek to enshrine this limit into a resurrected nuclear agreement or in a prospective missile deal with Iran. Such an agreement, however, would not be worth the paper it’s written on. Not only would trading away sanctions for this ban cement Iran’s existing ballistic missile arsenal—the biggest in the Middle East—but it would ignore how Iranian officials have caveated the ban over time. In 2018, for example, Hajizadeh claimed that Iran did not lack the capability to produce missiles over 2,000 kilometers, and that the limit was not set in stone. This was again reinforced by another IRGC commander in 2019.

What’s more, according to Hajizadeh’s deputy, the purported founder of Tehran’s ballistic missile program spent years before his death working with the IRGC on the country’s space program and solid-propellants to make sure Iran would not forsake range even as it appeared to conform to the 2,000-kilometer limit. Put differently, the space program is how Tehran is working to increase the range of its missiles.

Less than a decade ago, the Islamic Republic went to great lengths to downplay that it was seeking such longer-range strike capabilities. But steady technical advancements in the missile space, as well as impressions about the lack of American resolve and the strength of Iran’s military deterrence appear to have made the regime somewhat more brazen. In fact, just in the past two years Iranian officials and Iranian media have publicly flirted with references to a potential ICBM option. Most damningly, an ultra-hardline Iranian newspaper used the successful Raafe motor test to run a headline touting, “5,000 kilometer missiles are more within reach than ever.”