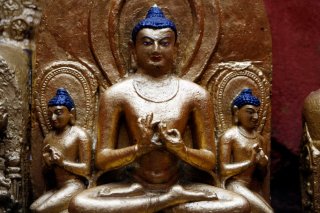 In 2001, the world was aghast when the Taliban dynamited the 1,500-year-old Bamiyan Buddhas, a United Nations Educational, Scientific and Cultural Organization (UNESCO) world heritage site. The destruction of the Buddhas in Afghanistan was not the world’s worst assault on Buddhist heritage, however. That began in 1950 when the People’s Liberation Army (PLA) invaded Tibet. Nine years later, Chinese Communist Party (CCP) leader Mao Zedong began a twenty-year campaign to eliminate Buddhist heritage in Tibet. Chinese forces destroyed more than 99 percent of the country’s 6,000 monasteries and forced the Dalai Lama into exile in India.

The CCP’s role as the most destructive force to Buddhism since Genghis Khan makes Beijing’s attempt to leverage Buddhism to China’s diplomatic benefit even more cynical and audacious. It is akin to Turkey seeking to speak on behalf of Armenian culture or Serbia seeking to be the voice of Bosnian or Kosovar Muslims.

Mao imposed atheism upon mainland China and did not tolerate any organizing philosophy that might compete with his brand of communism. However, China has never been devoid of religion and religious philosophies. In the Han dynasty, the emperor Wu Di (r. 141-87 BC) made Confucianism the state creed. Buddhism entered China shortly after, carried along the Silk Road. Buddhism and more homegrown Taoism influenced each other and neo-Confucianist thought. In the ninth century, the Tang dynasty emperor Wuzong (r. 840-846) sought to clean the religious slate. He persecuted religions he considered foreign implants, a purge that took its toll on China’s Buddhist, Zoroastrian, Manichaean, and Nestorian Christian communities. Jesuit missionaries reinjected Christian influences into China during the sixteenth century and the Qing dynasty revived Confucianism. Buddhism thrived not only in Tibet but also in the Manchu’s Mongolian homeland.

Today, Buddhism is the majority religion in Cambodia, Thailand, Myanmar, Bhutan, Sri Lanka, Laos, and Mongolia with millions more followers in Taiwan, Japan, India, Singapore, and South Korea. While China undercounts its own religious population for ideological reasons, the Pew-Templeton Global Religious Futures Project estimates there could be a quarter-billion Buddhists in China, even if most are non-practicing. The world simply will not know until the CCP inevitably falls.

While the CCP is best known for its attacks on religion, it has also taken a more cynical approach at other times. In 1953, for example, Chinese authorities founded the Buddhist Association of China to serve as a bridge between the Buddhist community and the CCP. It was a cynical move and not a very successful one. Chinese hardliners were unsure about the strategy and disbanded the association for a time during the Cultural Revolution. At the end of that period, however, the government allowed the organization to reemerge.

In 2006, the Buddhist Association of China organized the World Buddhist Forum to bring Buddhist delegations from forty countries to Hangzhou, China. It was the first religious conference China had hosted since the victory of the CCP. Chinese authorities notably refused to extend an invitation to the Dalai Lama or anyone closely associated with him. Beijing has since repeated the exercise, unfortunately even getting the United Nations (UN) secretary-general to buy into the façade. Within the halls of the UN headquarters, money and power trump principle.

Under Chinese president Xi Jinping, Beijing has increased its use of the Buddhist Association of China. Last year, for example, the group met to discuss cooperation along the Mekong Delta. “China and Buddhist communities of other countries in the region have continued to write new chapters of friendship through exchanges and cooperation,” Master Yanjue, head of the Buddhist Association of China, explained. Yanjue’s comments should not pass unaddressed. He should be stigmatized for what he is: a CCP collaborator.

The entire exercise is a cynical attempt by the CCP to co-opt a religion it disrespects as a soft power Trojan horse among neighbors anxious about China’s assertiveness and disrespect for their sovereignty. China nevertheless claims that Buddhism is an “ancient Chinese religion,” and not only hosts conferences but has also begun inviting Buddhist monks from Myanmar, Sri Lanka, and even Pakistan’s small Buddhist community. While the CCP burned and buried the vast majority of China, Tibet, and Inner Mongolia’s Buddhist heritage, Beijing has sought to allow remaining relics to go on tour to cultivate goodwill with countries like Thailand.

India may be late to the religious soft power game but it is a far more authentic force. Buddhism first developed in what is now the Indian state of Bihar. Early Indian kingdoms fed and cultivated the new philosophy and faith. While Buddhism has, like Islam, split into different sects and schools, the proto-Buddhism India nurtured is common across the divide. Over the centuries, Buddhism declined in India due to the rise of Hinduism and Islamic invasions, but it nevertheless endured and even thrived at times. While Pakistan and China persecuted their Buddhist communities, India embraced them. Today, India is home to the fourth-largest Buddhist community in the world.

Last month, I had the opportunity to spend several days in Ladakh, India. Three years ago, the Indian government divided Ladakh from the state of Jammu and Kashmir and made both separate union territories. Locals largely supported the move because it allowed Ladakh’s Buddhist population to control their own fate. Today, the union territory looks like what Tibet might have been had Mao and the Han Chinese not descended on the region. Infrastructure is good, as roads traverse passes in excess of 17,000 feet above sea level. Monks opened monastery libraries and study rooms to show me centuries-old Buddhist manuscripts in Tibetan, Sanskrit, and other languages, many of which are now online. Many Ladakhis speak Tibetan, a language largely banned inside China. While the Indian government is not as cynical or perhaps organized as the CCP, the scholarly resources of the monasteries are available to anyone who shows up. Every mountain valley seemingly has at least one monastery and visitors range from Hollywood A-listers to ordinary people looking for a new path or seeking to learn more. The Indian government does not interfere nor is Ladakh the only territory with a large Buddhist presence. The exiled Dalai Lama lives in Dharamshala, in the state of Himachal Pradesh. There is also a large Buddhist population in Arunachal Pradesh.

What happens within the Buddhist community does not necessarily stay within the Buddhist community. Just as Pope John Paul II played an outsized role as a moral compass during the Cold War, the Dalai Lama has inspired and led Buddhists around the world. He has not been able to liberate Tibet but he is one of the world’s most important faith leaders and living philosophers whose teachings and words influence hundreds of millions, if not billions, of people who seek something more than Chinese dictator Xi Jinping’s oppression. That the Dalai Lama is eighty-seven years old, however, raises questions about the future.

This is why China now plays the long game and injects itself into internal Buddhist debates. In recent years, for example, China has sought to use Nepal to influence the selection of Buddhist leaders and leverage its connection with the Nepali police to restrict the activities of Tibetan residents. A looming Buddhist leadership transition is why India and its supporters among the democratic nations who value freedom of religion and peace also must engage. Separation of church and state in the United States does not mean that religion should be the third rail in policy debate; rather, addressing faith issues must be a pillar of policy. The United States has an active Buddhist community and, in the name of religious freedom, should encourage further Indian sponsorship and alliance-building among Buddhist communities.

True, Washington cannot involve itself in a corrupting way as Beijing does but American policymakers can repeatedly call out and stigmatize those who subordinate the purity of faith for the privilege of power and rank. It should name, shame, and sanction every member of the Buddhist Association of China and make clear that accepting the bribes Beijing offers is not a path to power but rather to ridicule. The Buddhist bloc and the free world cannot allow China any say in recognition of the fifteenth Dalai Lama. A Dalai Lama who acts as a rubber stamp for the most murderous and anti-Buddhist regime in recent centuries would be an affront to justice and religion.