The Rise and Fall of Mexico’s Last Emperor 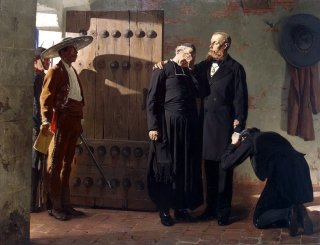 Edward Shawcross, The Last Emperor of Mexico: The Dramatic Story of the Habsburg Archduke Who Created a Kingdom in the New World (New York: Basic Books). Vii+324 pp., $30.00.

LATIN AMERICA has had two empires in its post-colonial history. One was the Brazilian Empire, which came into being in September 1822 as a representative parliamentary constitutional monarchy under Dom Pedro I. The empire continued under his son, Dom Pedro II, who ruled for fifty-eight years, but was overthrown by a military coup that led to the creation of a republic. During his reign, however, the country enjoyed political stability, economic growth, freedom of speech, and respect for the civil rights of its subjects, though it continued to maintain the institution of slavery.

The other Latin American empire initially lasted but two years and was reestablished three decades later, only to last just slightly longer. The Second Empire was sustained by foreign invaders two years prior to its establishment, and was marked by political instability, a ferociously brutal civil war, and economic hardship. The empire was Mexico, the foreign invaders were the French, and the emperor whom they installed was a Habsburg archduke named Maximilian. Long forgotten, especially in Mexico but also in the United States, the tale of Maximilian’s rise to the throne and sudden fall is not only fascinating but offers some worrisome lessons for contemporary American policymakers.

Edward Shawcross brings to life the tragicomic history of Maximilian’s short-lived reign in a fast-paced, highly readable volume entitled The Last Emperor of Mexico. The book draws heavily upon archival material in three languages—English, French, and German—as well as on personal memoirs in those languages and in Spanish. It is unlikely to be surpassed.

SHAWCROSS BEGINS his story fifteen years before the first European soldiers set foot on Mexican soil in 1862. Mexico had just emerged from the wreckage of its disastrous 1846–47 war with the United States, which saw American troops marching through its capital and had cost it territories that are now California, Nevada, and Utah; most of New Mexico, Arizona, and Colorado; along with parts of Texas, Oklahoma, Kansas, and Wyoming. The war had been followed by a period of instability deriving from tensions between liberals, who sought to create an enlightened secular state, and conservatives, actually reactionaries, who not only wanted to maintain the absolute primacy of the Catholic Church but also something akin to the Spanish monarchy. Spain had been expelled in 1821 when a rebel leader named Agustín de Iturbide had set himself up as emperor. He only ruled for two years before ultimately being executed for treason.

In 1855, the liberals came to power and sought to disestablish the Catholic Church, seize its property, and enshrine those actions in a constitution that it promulgated two years later. The reactionaries responded by overthrowing the government. The result was a three-year civil war, which in some respects was a class conflict. Its opposing leaders were, on the one hand, Miguel Miramon, the conservative wealthy descendant of the colonizing Spanish, and on the other, Benito Juárez, the liberal head of the Mexican Supreme Court, an indigenous Zapotec who rose from poverty to become a lawyer before evolving into a politician.

Though Juárez emerged as the winner and the country’s president, his government was saddled with a sizeable debt to both Britain and France. The British simply wanted their debts repaid, but the French emperor, Napoleon III, saw an opportunity to create a European counterweight—meaning, as it still does to many Frenchmen today, a French counterweight—to the increasingly powerful American republic. Moreover, Napoleon subscribed to what came to be called “pan-Latinism,” which tied Catholic Latin France to its American counterparts, and, indeed, was the ideology that prompted the designation of the lands to America’s south as “Latin America.”

Mexican conservatives, chafing under liberal rule, had even more reason to share Napoleon’s unease about American power. Far more explicitly than the French leader, who actually supported freedom of religion, speech, and the press, Mexican conservatives saw American Protestantism and liberal values as a fundamental threat to their nation’s security. The Mexican Catholic Church was even more reactionary than the politicians—it had the backing of the pope, Pius IX, who refused to accept the legitimacy of any religion other than Christianity nor any church other than Catholicism.

The challenge for the conservatives was to convince Napoleon to intervene in Mexican affairs and place a European royal on a re-established Mexican throne. Their lobbying foreshadowed the efforts of Ahmed Chalabi in the late 1990s and early 2000s, whose blandishments convinced neoconservatives to topple Saddam Hussein. And like the neocons, Napoleon did not need much convincing. Not only did he hope to bring about a check to American power, but like the British, he also wanted to have Mexico repay the funds it owed France. What he did need, however, was a suitable royal to install on the Mexican throne.

ENTER MAXIMILIAN. The young archduke was not Napoleon’s first choice, but his influential wife, the Empress Eugenie, favored him, as did key Mexican émigrés—the most notable among them being José Manuel Hidalgo, the Chalabi of his day. Maximilian was far more popular than his older brother, the emperor Franz-Joseph, who after some hesitation decided that it was best to have him as far away from Austria as was reasonably possible. Maximilian himself hesitated before agreeing to take on the throne of a land he had never visited and knew little about. It would not be the last time he would be plagued by indecision. Indeed, he lived in something of a dreamworld, building a palace in Italy he named Miramar to escape the stifling atmosphere of Vienna and favoring gardening over politics.

For his part, Napoleon concluded that the time to intervene in Mexico was especially propitious, as the United States was enmeshed in a civil war and would therefore be unlikely to intervene. Moreover, having strong sympathies for a Confederacy that in the war’s early days had achieved a number of battlefield victories, he correctly intuited that the war would last several years. Napoleon recognized, however, that he needed to pave the way for Maximilian’s entry into the country. To that end, in November 1861 he dispatched an initial force of 3,000 soldiers, accompanied by 6,000 Spanish and 800 British troops. The Spaniards supported the Habsburg royal, while Britain merely sought to have its debts repaid. That was not enough for Maximilian though, who insisted that any intervention that set him on the throne should benefit from active British support, not merely debt collection.

The dispatch of a multinational force notwithstanding, Maximilian hesitated to commit himself to travel to Mexico. He resisted both the blandishments of the Mexican émigrés who offered him the crown and the insistence of his young wife Carlota, daughter of Belgium’s King Leopold I and a cousin of Queen Victoria, that he accede to the émigrés’ wishes. He feared that without British support the United States would eventually intervene to dethrone him. He also wanted to be sure that the Mexican people, about whom he knew virtually nothing, and who knew even less about him, seriously wanted him to rule over them.

In the meantime, while trying to convince Maximilian to commit, Napoleon concluded that his initial expeditionary force was too small. Accordingly, in January 1862, he dispatched an additional 4,500 troops to Mexico. Even this larger force was insufficient to dominate the Juarista fighters, however; the French forces suffered a defeat at the hands of the liberals at Puebla, leading Napoleon to throw up his hands and commit 25,000 more troops to the conflict. By June 1863, the French, in league with the Mexican conservatives, created a thirty-five-man governing body called the Junta Superior del Gobierno (loosely translated as the “Superior Council of the Government”). This body, in turn, named two arch-conservatives, Juan Nepomuceno Almonte and a senior priest named Pelagio Antonio Labastida, as well as an ancient general, to act as a Regency Council until the new emperor arrived. The junta also elected a 215-man (they were all men, of course) assembly that voted to invite Maximilian to lead the new empire. The entire exercise was stage-managed by the French representative in Mexico—an obnoxious, formerly obscure French diplomat named Dubois de Saligny.

In creating institutions that nominally reflected “the will of the people,” Napoleon’s government not only foreshadowed similar undertakings by the Soviet Union in Eastern Europe in the aftermath of World War II, but America’s creation of the so-called Iraqi Governing Council (IGC) which nominally governed the country from July 2003 after the American invasion. Like the junta, the IGC was subordinate to the occupiers, in this case, the Coalition Provisional Authority, which Washington organized, controlled, and led. And, as the Americans soon discovered in Iraq, huzzahs in the capital meant little outside it. As François Claude du Barail—whom Shawcross merely describes as an officer but who at the time commanded two cavalry squadrons and later not only rose to the rank of brigadier general but subsequently served as minister of war—tartly recalled in his memoirs, “while we danced and flirted in Mexico City, in the rest of the country we had a little less fun.” And with good reason, for, as Shawcross observes, “Juárez had retreated, not surrendered.”