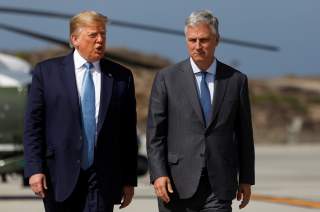 Robert O’Brien will be President Donald Trump’s fourth national security advisor in just over two-and-one-half years. Ronald Reagan had five advisors—Dick Allen, Judge William Clark, Bud McFarlane, Frank Carlucci and Colin Powell, but that was over a period three times as long. By choosing O’Brien as his next advisor, Trump reflects the reality that his national-security policy predilections fluctuate like a sine curve.

Michael Flynn, his first advisor, was a fire-breathing retired lieutenant general who served as President Barack Obama’s defense intelligence chief for two years before being dismissed from the job in August 2014. During the 2016 campaign, while Trump and Hillary Clinton were in a heated race for the presidency, he often mocked Clinton by leading Trump supporters in chants of “lock her up.” He was a hardliner on Iran, not so hard on his former Russian clients, and a strong supporter of Israel.

Flynn’s replacement, H. R. McMaster—another three-star general—was in many ways his polar opposite. He was a hardliner on Russia, tried to dissuade Trump from terminating the Joint Comprehensive Plan of Action (JCPOA), better known as the Iran nuclear deal, and was suspected (wrongly as it seems) by right-wing supporters of Israel as being hostile to the Jewish State. Whereas Flynn was forced out of office in under a month, much to Trump’s regret, or so it seems, it was Trump who dismissed McMaster. The president had grown increasingly exasperated by McMaster’s briefing style. Even more important, Trump sought a harder line vis-à-vis Iran—and toward America’s allies—and a softer one toward Russia, or, to be more precise, Vladimir Putin, that McMaster would easily accept. The two parted ways after McMaster provided Trump with a resignation letter in March 2018.

Trump reportedly had initially rejected John Bolton for the position of national security advisor because he could not stomach Bolton’s walrus mustache. On the other hand, Bolton shared Trump’s hostility toward the JCPOA and shared Trump’s initial view of the North Korean dictator Kim Jong-un as the “little rocket man.” He also shared Trump’s strong support for Israel.

Evidently willing to overlook Bolton’s walrus mustache, the president gave Bolton the job as soon as McMaster made his exit. Soon enough, however, Trump tired of his national security advisor. He disliked Bolton’s inability to get along with his senior colleagues, especially Secretary of State Mike Pompeo. He disliked the way in which Bolton confronted him when they disagreed. The president has always viewed his senior advisors and cabinet officials through the lens of his real estate experience: they are no more than flunkies who were hired to cater to his every whim.

But Bolton had the temerity to disagree with Trump: over Trump’s outreach to Kim; over the extent of American support for the rebellious Venezuelan congressional leader Juan Guaido; over Trump’s willingness to meet with Iranian president Hassan Rouhani; and over Trump’s plan to invite the Taliban to Camp David, which served as the proximate cause for Bolton’s dismissal.

In choosing the State Department’s chief negotiator as his new national security advisor, Trump has hit upon a conservative lawyer who served with John Bolton at the United Nations yet also was active in Mitt Romney’s 2012 election campaign. Indeed, these somewhat polar opposites both wrote blurbs for O’Brien’s most recent book, While America Slept, alongside blurbs by Trump’s outspoken ambassador to Germany, Richard Grenell, and former Sen. Jim Talent, a pillar of the national-defense establishment.

O’Brien has already shown that he is content to let Trump take the credit for his work, which he made evident after he secured the release of American hostages and let the president claim that he was responsible for their return to the United States. Like a good lawyer, he remains in the shadows while his client absorbs the limelight. It is an endearing quality as far as the president is concerned.

O’Brien’s legal practice focused on international arbitration, which indicates that he is a man capable of listening to all sides and then synthesizing his response. He is likely to resurrect the national-security process that Bolton deliberately shattered, and to present the president with policy choices that reflect many views, not solely his own. He can be expected to adhere to the president’s wishes, however, and should he disagree with Trump, then he would be more likely to do so indirectly, much as has Mike Pompeo, rather than in an aggressive, Bolton-like manner.