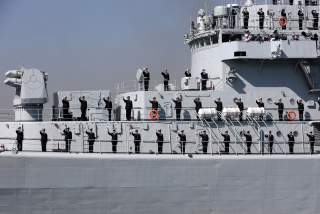 As technology advances relentlessly, the real prospect of robot wars is apparently almost upon us. The 2015 book Ghost Fleet, written by Peter Singer and August Cole, lays out a vision of a future war between China and the United States, and the role of artificial intelligence (AI) in that hypothetical military conflict is not small. Drones of various types not only carry out surveillance in this novel but also play crucial roles in communications, logistics, as well as in high-intensity combat.

In one memorable vignette, two American unmanned surface vehicles “following an algorithm developed from research done on the way sand tiger sharks cooperated in their hunting” successfully prosecute a Chinese nuclear submarine. Strategists familiar with the U.S. Navy’s Sea Hunter program know that this ambition is not especially far-fetched. Yet, what if that book understates China’s ambitions to apply AI to the future battlefield, and to undersea warfare, in particular? Such a conclusion could be plausibly drawn from recent revelations in the South China Morning Post.

There are a few coming attractions at the cutting edge of perhaps the most important warfare domain in the escalating South China Sea arms race in the Asia-Pacific region. But let us briefly look backward and not forward. For example, an unusual event occurred in mid-December 2016. While the vast majority of press coverage at that time—and in the months afterward—focused on the surprise 2016 election of Donald Trump, the so-called “drone incident” between China and America has been neglected by journalists and strategic researchers alike, with a few exceptions. That incident involved a standoff over China’s seizure of an American underwater drone, which was eventually returned. This article examines some Chinese-language renderings of that incident to see what can be gleaned about Beijing’s evolving vision of robot war under the Pacific.

One article that appeared in China National Defense News [中国国防报] shortly after the incident goes into considerable detail on the workings and missions of the American glider [波浪滑行者]-type UUV that was seized. It is explained that this glider vehicle is used to gather salinity, temperature and depth readings, enabling the creation of hydrographic maps [水文地图]. While such vehicles are described as “extremely slow,” it is recognized that they have certain operational advantages, such as extended range and endurance that allows them to “maintain battlefield presence over especially long durations and thus provide continuous observation [在作战区域保持特久存在并进行特续蓝视].” This analysis warns against minimizing the importance of gathering ocean data for military purposes, noting that sonars are seriously impacted by oceanographic factors, such as temperature, salinity and depth. Indeed, the point is underlined in the analysis that for great power navies, such data collection is “exceedingly important [太重要了].” While this article does not address the political aspects of the “drone incident,” it does suggest that such operations near to the sovereign waters of a country creates the “risk of detection and capture.”

Another quite expansive article in the same newspaper gave more attention to the political and strategic aspects of the incident. This article ran under the headline “The Chinese Side Respectfully and Moderately Manages the UUV Incident [中方有礼有节管控潜航器事件].” The article notes that Chinese Navy ship 510 (a type 056 light frigate) met the USS Mustin in the vicinity of the original incident—about fifty miles northwest of Subic Bay—to accomplish the transfer of the UUV back to the U.S. side. With a little pride, so it seems, it is related that the American glider was returned “completely whole and undamaged.” The article explains that a Pentagon spokesman had commented that the U.S. Navy had been “legally undertaking military surveys in the South China Sea.” It further notes that the Americans had complained that the UUV had English markings that “clearly identified the vehicle as belonging to the US government and should not have been taken [明确说明是美国政府财产不得取走].”

This article references a New York Times piece in suggesting that the American gliders could be useful for tracking the movements of Chinese submarines. The Chinese piece assesses that the U.S. Navy has about 130 of this type of UUV, but notes that it remains unclear how many of these are deployed to the South China Sea. The late Sen. John McCain is cited in the Chinese piece as opining that “China is destroying regional stability [中国破坏地区稳定].” The National Interest [国家利益] is also mentioned by the Chinese military analysis and recommends that Washington “systematically reveal its capabilities [有序地展示力量].” At the same time, this analysis also quotes a Chinese official spokesperson remonstrating against U.S. ships and aircraft that have for a long time conducted intelligence and other military operations in “China’s proximate sea areas [中国当面海域].” This statement said China will resolutely oppose these activities, demand that the United States cease such operations, and will take appropriate countermeasures.

While taking note of an article from the Japanese press claiming that an “armed clash between the US and China is inevitable,” this Chinese analysis observes that other experts assess overall that, “the US side had a desire to limit risk [美方管控风险的愿望]” in this situation. At the same time, it is noted that some Americans could be reluctant to simply “let it go,” because “the US has lost significant face before its allies [美国在亚太盟友面前大大丢脸].” In the final line of the piece, the author warns that the Trump administration will undoubtedly develop some new policies for the South China Sea, and China should make “sufficient . . . preparation [足够 . . . 准备].”

Concerning drone interactions, one may come to some preliminary conclusions almost two years after this rather bizarre incident. First, when one puts the hype aside, it is striking to observe how easily China was able to abscond with the vehicle, on the one hand, and yet also how quickly the crisis was resolved and the drone returned. There may, indeed, be a kind of “ho-hum” quality to this level of strategic interaction. At the same time, it also seems quite possible that the U.S. Navy has not fully worked out a doctrine for operating such vehicles in which they are properly safeguarded. Obviously, such a failure would matter much more if this vehicle was a more high-tech drone rather than a comparatively simple glider. There is little doubt that the Navy has had to reexamine procedures for operating such vehicles in the wake of this incident. Yet, those like myself, disturbed by the prospect of rapid escalation between the superpowers, may take some cheer in knowing that “cooler heads” can indeed prevail and such incidents need not lead to war. However, a more disturbing conclusion from this crisis might well be that, while one may wish that drones could help the United States circumvent the tyranny of geography in the Asia-Pacific theater, they may in reality compound the problem. If China has more infrastructure to support the systematic and integrated fielding of drones in the theater, America may find itself at a considerable disadvantage in the coming “robot wars,” even if some U.S. drones are capable of operating at enormous distances. Indeed, it could well be that China’s inherent asymmetric advantage (in ships, relevant sensors, etc.) led inevitably to the “drone incident.” Is America ready for the next incident?

On the broader theme of U.S.-China relations, it is worth noting that the “drone incident” occurred about two weeks after the famous phone call between then President-elect Donald Trump and Taiwan leader Tsai Ing-wen. While that phone call was interestingly not mentioned in either of the Chinese military analyses mentioned above, it is this author’s strong hunch that the two events were actually directly connected. Indeed, it took quite a bit of repair work by the new U.S. president directly on the bilateral relationship after that initial “hiccup” to set U.S.-China relations back on a stable trajectory. But that seems like a long time ago, and we have now perhaps come full circle. U.S.-China relations are now entering into an almost unprecedented era of grave turmoil with unpredictable results for issues of supreme importance like the Korean Peninsula and the global economy. Or perhaps Washington and Beijing are sleepwalking into a war? That’s unlikely, of course, but cannot be ruled out. This is because of what one wise Beijing strategist said to me on my recent visit: neither China nor the United States fully understands one another’s red lines in the maritime domain.