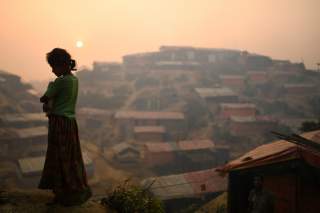 The Rohingya refugees are probably going to be shifted to a newly “civilized” isolated Island in the middle of Bay of Bengal. However, China is reportedly offering Rohingya refugees $6,000 each to go back to Myanmar-Rakhine, the district from which they fled a “textbook case of ethnic cleansing.” On the other hand, China also helps Bangladesh government making the Rohingya Island habitable. The Burmese government, even Bangladesh government too, eventually might come onboard to send off the Rohingyas, without any promise of citizenship or permanent settlement, given the new rapprochement between Dhaka and Beijing, breaking away from its long-held “India first” policy. In the entire picture, however, the United States is missing in action. In fact, this might be the United States’ last opportunity to keep exerting its influence in the Bay of Bengal.

A little bit of geopolitical background is helpful before making the case for why this might be America’s last golden opportunity. The ethnic cleansing on the Rohingya population in Rakhine was overlooked and condoned by the regional hegemons due to the convergence of several geopolitical interests.

First, China is conducting a major economic overhaul in Rakhine, which is part of the China-Myanmar Economic Corridor. A stable Rakhine is an utmost priority for China because it wants economic activity to remain uninterrupted. That is why Chinese foreign minister Wang Yi visited Myanmar two months after the Rohingya massacre to unveil plans to build the corridor and assure Myanmar of China’s support in helping to “settle the Rakhine issue.” It is highly likely that Burma received a “no objection” signal from China’s end before the massacre.

The Indian stake in the Rohingya genocide was long been subtle. The main motivation behind India’s unwavering support behind the Rohingya ethnic cleansing is the ruling party’s Hindutva-driven islamophobia. The Hinduist government has excluded four million Bengali-speaking Muslims from the national registry in the Eastern state of Assam. The government says that these Indian citizens are supposed illegal immigrants from Bangladesh. By no coincidence, the Burmese nationalism, which is driven by an extreme interpretation of Theravada Buddhism, propagates the exact same rhetoric: Rohingyas—who are Muslims and speak a dialect of Bengali—are the supposed illegal immigrants from Bangladesh.

The common threat to both the Hindu Nationalism of the ruling party of India and the Buddhist Burmese Nationalism of Myanmar is a nation-state of Bengali Muslims—Bangladesh. This is where Indian and Burmese government’s interest converged. This is precisely why, following the Rohingya massacre, Indian prime minister Narendra Modi said that India shares Myanmar’s concern about “extremist violence” in its Rakhine state. Modi did not shy away from saying that India and Myanmar had similar security interests in the region, which is a clear reference to the “security threat” of Bengali Muslims. The common threat eventually became a security threat that prompted India and China to work together.

There is another reason India does not want to see any insurgency going on near its border: India is worried that if the Rohingya people try to organize a resistance and claim back their land, then rebels, like the members of United Liberation Front of Assam, could potentially sell or supply arms to them.

A person might look at the geopolitical matrix that made possible the regional hegemons’ decisions to condone the Rohingya crisis and see a zero-sum game. But on the contrary, the nihilistic scenario has provided avenues of scope for other players in the region. The United States has been losing ground in the region for quite a long time, succumbing to the Chinese “String of Pearls” policy in the Indian Ocean. This humanitarian catastrophe can provide an excellent avenue for humanitarian intervention for the United States.

Also, the United States can hardly find any other issue in which it can capitalize on its NATO ally Turkey’s unwavering support these days. Using Turkey’s face to enter into the game is instrumental here because any mobilization along with the Turkish flag will be welcomed by the 90 percent Muslim majority public in Bangladesh. There have been Turkish initiatives in the Rohingya refugee camps in Bangladesh. In fact, a visit to the massacred Rohingya inside Burma by Turkey’s first lady and foreign minister was widely popular and “went viral” in the Muslim social media world.

The United States can take many routes to achieve the same result. Bangladesh has already asked the Secretary of State Mike Pompeo for a U.S. intervention to create a safe zone in Rakhine. The United States should ask the Bangladesh government to not send the Rohingyas to the controversial island because that will only make a sustainable repatriation process lengthy, if not impossible. Years of oppression have left the Rohingyas with little voice; to make matters even more grievous, there is virtually no civil-society leadership inside the Rakhine State. It is imperative to help build civil-society leadership among this marginalized community. The Bangladesh media’s role in this regard needs to be encouraged. U.S. government and nongovernmental efforts are far from sufficient in this area.

The United Nations may at some point play a larger role in this conflict. But China should not be worried about the establishment of a UN safe zone. Its economic activity will remain stable and uninterrupted. In fact, some local experts in the Bangladesh government have favored this option. A UN resolution might take some time, just like all heated resolutions. Should a resolution be unattainable though, then the United States can create leverage through sanctions. Although some people have argued that sanctions are sometimes blunt and ineffective, sanctions that target a government’s leadership tend to work. The United States should consider hitting select generals and politicians with a round of travel and economic sanctions. Only this type of pressure will push the Myanmar government toward thinking about a comprehensive solution. And, in the end, if the Rohingya people gain control of their situation with U.S. assistance, then the United States will gain leverage in a region where it is losing ground at an exponential rate.