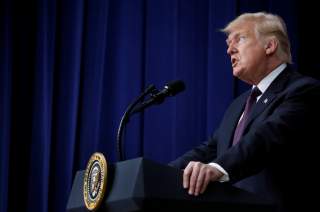 “The Saudi officials we are sanctioning were involved in the abhorrent killing of Jamal Khashoggi,” Steve Mnuchin, the Treasury secretary, said on Thursday, announcing sanctions on Saudi nationals and bringing the kingdom into the ranks of countries such as Iran, Russia and Venezuela. “The United States continues to diligently work to ascertain all of the facts and will hold accountable each of those we find responsible in order to achieve justice for Khashoggi’s fiancée, children, and the family he leaves behind.”

With that, hawks in Washington and crown prince loyalists in Riyadh hope the morbid episode can be brought to a close. As a general matter, the administration has been aggressive in targeting “specific individuals responsible for human rights abuses around the world,” David Reaboi of the Security Studies Group (SSG) told me Thursday. Says Reaboi: “The designation of these seventeen Saudis for the murder of Jamal Khashoggi is appropriate, and will express the seriousness with which the event rocked the U.S. capital last month.” Reaboi’s SSG was among the administration’s most prolific defenders. As Sens. Marco Rubio and Lindsey Graham called for a tough line against Riyadh, the think tank notably went further than most in urging caution and warning against accommodating regional rivals Turkey and Iran. Reaboi says: “I’m glad the Trump administration addressed this issue in a way that is proportional, exacting a penalty for triggering this crisis while not endangering U.S. interests in the process.”

For the administration and many of its defenders, that’s the hope—bringing the episode to a close. Much is at stake—the Trump-era, status quo assessment of “U.S. interests” chief among them. In this regard, a recent CNBC report is of interest: there’s been rampant speculation that Saudi Arabia has been purposely hiking its oil production—causing a price dip—to offset both the ferocious U.S. tact on Iran and to buoy President Donald Trump’s political prospects in the midterm elections.

“They got sort of tricked here,” John Kilduff, founding partner of energy hedge fund Again Capital told the outlet. “The Russians and the Saudis in particular ramped up production, ramped up exports ahead of what was supposed to be severe sanctions on Iran, and when the administration gave the eight waivers to Iran's largest buyers, it undercut that whole equation."

In addition to frustration out of Riyadh on that front, two potential hiccups threaten the tentative understanding informally brokered between Washington and the Saudi elite this week. The first, a former senior Trump administration official tells me, is if the Khashoggi murder is thrust back into the headlines anew: in the form of the leaking of either audio or video—or both—of the brutal assassination.

But the second concern for the current Trump administration strategy—a largely wholehearted embrace of the Sunni Arab autocracies, while throwing shade at Turkey and upping the ante on Iran—is that long-term the Khashoggi episode has set in a deep chill in American attitudes toward the kingdom. The controversy unleashed a half-month’s drumbeat of negative U.S. media coverage of the Saudi government ahead of a major election, and caused major hawks and administration allies such as Senator Graham to call for the crown prince, Mohammad Bin Salman (MBS), to be ousted.

Skeptics of the Saudis seem to feel emboldened—and that a major policy change with this politically limber president—is truly possible. Efforts are under way on the Hill to limit or fully curtail U.S. support of the Saudi-led coalition in the lame duck session, with outgoing House members such as Dave Brat and Dana Rohrabacher poised to join Democrats. Leading KSA critics are pouncing. “The sanctions against individuals who murdered Jamal Khashoggi are a good first step,” said Sen. Chris Murphy in a statement Thursday, after the Treasury announcement. Murphy all but singled out MBS. “But strikingly absent,” said the senator, “from this announcement are the people—or the person—who ordered the attack.” Murphy targeted the military campaign MBS initiated as Saudi defense minister years ago and said that he and others would soon introduce fresh resolutions on the matter.

Finally, in the broader view, foreign policy restrainers in elected office—including those with the president’s ear—appear more emboldened in calling for a shift. Sen. Rand Paul told The American Conservative foreign policy conference on Thursday that “yes” he would potentially support U.S. re-entry into the Iran nuclear deal and that “I’m just not sure who’s more evil, Iran or Saudi Arabia.”