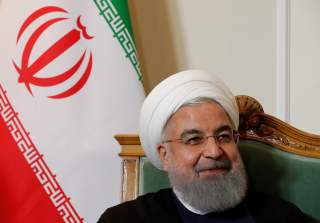 Concordant with Trump’s decision in May to leave the deal, the first batch of reimposed sanctions on Iran will go in effect today.

Another senior administration official added that the point of this ”economic pressure campaign” is to “deny the regime the financial resources that it needs to finance terrorism and nuclear missile programs and other dangerous activities around the Middle East.”

The officials stopped short of calling for outright regime change, something several prominent conservatives already call for. “We would like to see a change in the regime’s behavior,” a senior administration official said.

But though the administration itself it taking a decidedly hawkish line on the country, it is still coming under pressure from the interventionist Right to do more.

“Sanctions alone . . . will not stop Iran. A credible military threat to deter a nuclear breakout is key,” Jim Phillips of the Heritage Foundation said Monday.

And despite securing a major victory with American nullification of the JCPOA, Frank Gaffney of the Center for Security Policy, close with National Security Advisor John Bolton and National Security Council Chief of Staff Fred Fleitz, wants a purge of national-security officials.

“Mr. Trump’s administration continues to employ, and even promote people, from his opposition’s team. For example, a promotion is reportedly in the offing for top State Department official Brian Hook who organized the group that put out the Never-Trump letter. Andrea Hall, a protégé of the notorious Obama propagandist Ben Rhodes, is said to be his replacement,” Gaffney said Monday.

Hook, a holdover from Rex Tillerson, is an establishment figure unpopular with uberhawks like Gaffney, as well as those on the Right who seek a more restrained U.S. foreign policy. He has been a major pointman for this administration’s tack on Iran.

But for now, some in the White House are just hoping for relative calm, reasoning: we could do much worse than the status quo.

“Thank God, it looks like Gen. Kelly is staying,” a White House official told me Monday.

As ever, the war is on for the president’s mind.

Those on the restrainer Right have warmly greeted Trump’s statement that he would meet with Rouhani.

There are “reports in Israeli media that Trump [and] Rouhani may hold a meeting during September [United Nations General Assembly],” notes Sina Toossi of the National Iranian American Council. He further reports that “Kuwaiti Al Jarida—widely believed to be used by Israel to disseminate info to regional countries—says Trump has accepted seven Iranian conditions for bilateral negotiations.” Toossi argues, however: “Context of these reports is . . . Israel has track record of vehemently opposing US-Iran diplomacy/improvement of relations & of sabotaging such efforts.”

The administration was pressed on how Trump’s public desire to meet with senior Iranian officials comports with the hawkish actions of his officials behind the scenes. In more ways than one, the dual approach mirrors the policy on Russia: a ratcheting up of sanctions combined with seemingly contradictory rhetoric from the president. Trump, of course, has been more personally critical of Iran than Russia. Defenders of the president point to a logical strategy on Tehran: a good cop, bad cop routine, the likes of which worked with North Korea.

“This is completely consistent with what the president has done with other meetings with what you might refer to as less friendly regimes, from North Korea to Russia, which is not to give a lot of—any—sanctions relief in advance of the meeting, to make very clear that the United States will keep the maximum pressure on these regime’s until our goals are achieved,” a senior administration official said.

“The essential, baffling contradiction in the Trump presidency is that his personal foreign-policy instincts seem essentially realist, but he has chosen increasingly to surround himself with advisors nurtured on neoconservatism,” Scott McConnell, founding editor of The American Conservative told me Monday. “So you have Trump making almost George F. Kennan-type gestures on Russia and even on Iran . . . while his foreign-policy apparatus is essentially Cheneyite, talking about rolling Russian influence back and now . . . in Iran, a particularly reckless neoconservative fantasy. How this contradiction is resolved will determine whether Trumpism has a future or not.”