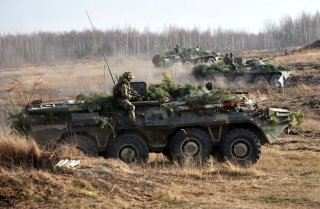 For the second time this year, Russia has launched a military buildup at Ukraine’s borders. Back in April 2021 Russia already deployed over 100,000 troops on the border with Ukraine. But the new developments look different, and potentially even more dangerous. Unlike the fairly open buildup in the spring, the recent Russian military deployment is covert, often taking place at night, is by elite ground units, and accompanied by much tougher rhetoric of the Russian leadership. Moreover, the current Russian military presence is expanding not only in Crimea and near the separatist republics’ border, but also along all of Ukraine’s perimeter. These developments launched a heated debated in the U.S. policy community about the goals Moscow is trying to achieve and ways to deter it.

It’s Not About NATO Expansion

What explains another round of military buildup? For many years the Kremlin’s official line emphasized Ukraine’s NATO formal membership as a “red line,” which made many analysts blame Russia’s 2014 war with Ukraine on the alleged NATO expansion into the East.

Yet the recent official statements suggest that Kremlin’s “red lines” for Ukraine have shifted. Now even informal Ukrainian military cooperation with the West appears off the table for the Kremlin. For example, in a recent interview, Vladimir Putin suggested that Ukrainian president Volodymyr Zelenskyy’s use of drones violates the Minsk accords and other agreements, and claimed that its naval drills with NATO in the Black Sea risk further escalating tensions in the region. It looks like the Kremlin now draws the line at any Ukrainian defense cooperation with Western military alliances, be it their troops' presence in the country, arms transfers, or use of the territory. All of the above is now deemed unacceptable by the Kremlin.

But it is not the first time Kremlin’s red lines with regards to Ukraine have shifted. Already back in 2014 for the Kremlin, it was not about a formal prospect of NATO accession per se. Ukraine's 2014 provisional post-Euromaidan government did not take any active steps to enhance NATO integration, nor did it make any bold declarations on this topic. Serious discussions of Ukraine's NATO membership in 2014 started, if anything, in the aftermath (not prior to) Russia's aggression against Ukraine. And yet right after the Euromaidan revolution Russia launched a war with Ukraine and annexed Crimea. Why? Because of the possibility of Ukraine’s active integration with the European Union following the initialing of Ukraine’s EU accession agreement. Further integration with Europe risked depriving Putin of the leverage he had over Kiev, which was deemed unacceptable. So the 2014 “red line” was not about NATO, it was about the EU membership.

In general, scholars tend to overstate the Kremlin’s objection to NATO expansion. After NATO expanded into the Baltic region in 2004, Russia’s land border with NATO countries has become more than twice as large as its land border with Georgia, yet Putin was not too concerned at the time. In fact, in 2002, he stated that NATO enlargement to include the Baltics was “no tragedy,” as long as no new military infrastructure was introduced. In the 2002 Rome Summit Declaration, NATO members and Russia reaffirmed their determination to build together a lasting and inclusive peace in the Euro-Atlantic area on the principles of democracy and cooperative security. In 2004, Putin again stated that he had “no concerns about the expansion of NATO” because “today’s threats are such that the expansion of NATO will not remove them.”

Until 2008 Moscow had been developing an active partnership with NATO, participating in joint military exercises in Afghanistan and peacekeeping operations. In 2007, Moscow went as far as ratifying an agreement allowing NATO troops and arms to pass through Russia's territory in case of a military need. Up to 2009, Kremlin-linked politicians in Russia even raised the possibility of Russia’s own future NATO accession. At multiple meetings with President Barack Obama in 2009-2012, Putin and Prime Minister Dmitry Medvedev never raised concerns over NATO expansion.

In other words, for the Kremlin, it has never been about NATO expansion per se. It was about the control over Ukraine which precludes any (formal or informal) Ukraine’s collaboration and integration with Western alliances. Putin’s desire to reassert Russia’s dominance and control in the post-Soviet space makes him unhappy with any arrangement that takes Ukraine out of Russia’s sphere of influence.

The continuous shift of the red lines that Putin draws for Ukraine stems from the fact that Russia is yet to pay a serious price for its incursion in neighboring countries. The international community avoided openly interfering in the conflicts Russia launches in the post-Soviet space nor did it provide foreign military aid that would fundamentally alter the existing power balance in the region. The economic sanctions imposed on Russia have slowed down its economic growth, but not in a way that would seriously constrain its economic and military capabilities. Frequent predictions about Russia’s inevitable decline, are yet to come true. This dynamic of Western responses has taught the Kremlin to demand more, and hence its red lines with regards to Ukraine keep shifting.

The main takeaway that follows from this analysis is that the appeasement options offered by some analysts do not really exist for the West. There is hardly any option presuming an independent existence of Ukraine that would satisfy the Kremlin. No matter how much the West is prepared to concede to Russia, the Kremlin’s appetites will keep growing over time unless it is faced with strong resistance.

Maria Snegovaya is a Postdoctoral Fellow in Political Science at Virginia Tech and an IERES Visiting Scholar at George Washington University.