Russia’s Neighbors Have More Leverage Than They Think 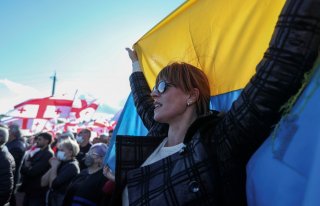 If the Belarus opposition had won the Nobel Peace Prize, as some thought it might, anti-government protests could have again engulfed Minsk and heightened anti-Kremlin sentiments. This scenario underscores the complexities Russia faces in seeking to influence or dominate post-Soviet neighbors. Despite their three decades of independence, the Kremlin seems to view neighbors as less than fully sovereign. Talk of “red lines“ implies that Moscow may use force to seek to prevent neighbors from someday joining NATO or the European Union.

The post-Cold War vision of Europe open, free, and at peace has been put in abeyance by Russia’s wars with Georgia and Ukraine and risks elsewhere. Moscow claims a sphere of influence in the former USSR, but its interests and tactics vary. What are Russia’s priorities, and what should the West be doing?

In 2008, Russia went to war with Georgia after NATO promised that it and Ukraine “will become members.” Then-President Mikheil Saakashvili’s constant criticism of the Kremlin might have helped goad Moscow to action.

In 2014, Russia seized and annexed Crimea and launched a war in eastern Ukraine after Kyiv sought to reach an Association Agreement with the European Union, a step far short of membership. But Russia’s coercion failed to stop a new, post-Maidan government from concluding the pact.

In 2020 in Belarus, large public protests emerged after longtime dictator Alexander Lukashenko stole another election and mishandled the Covid crisis. But President Vladimir Putin backs him and his brutal suppression of protesters. Moscow sees Minsk as an indispensable security anchor. Although the two countries are part of a Union State, their marriage is without love.

If Lukashenko’s regime were to lose control of the country, then Russia could intervene even as it might be wary of the risks and costs of military occupation. Unlike Georgia and Ukraine, Belarus has never had close Western ties or NATO aspirations.

Central Asia is a growing concern for Russia after the U.S. withdrawal from Afghanistan. Islamist fighters could flow from Afghanistan to Russia’s restive North Caucasus, and an impoverished Taliban regime could export narcotics north to Russia, an acute threat.

Russian-led organizations are active in Central Asia. Kazakhstan and Kyrgyzstan belong to the Eurasian Economic Union, and they and Tajikistan are members of the Collective Security Treaty Organization, a military alliance of questionable value. To varying degrees, Central Asian states pursue multi-vector foreign policies aimed at balancing among great powers. Russia might allow the United States to use its bases in Central Asia to address threats in Afghanistan.

China is active with its Belt and Road initiative in Central Asia and the South Caucasus and has a military base in Tajikistan. As in the Arctic, Moscow might be uneasy about China’s increasing footprint in a region of traditional Russian influence.

In the South Caucasus, Moscow was slow to respond to the Armenia-Azerbaijan war last year but negotiated a ceasefire including a provision for twenty-five hundred Russian peacekeepers to patrol the front lines. Turkey helped Azerbaijan win the war and is maneuvering for a greater role in the region. Recent tensions between Iran and Azerbaijan over territorial shifts resulting from the war could make Russia nervous. On October 2, amid rising political polarization, Georgia once again held competitive but not free and fair local elections.

Moldova’s people seem to want their country to move westward. A new government headed by Harvard graduate President Maia Sandu is decidedly pro-European. A Russian military base in the breakaway Transnistria region gives Russia some leverage.

While Ukraine, Belarus, and Georgia may be top priorities for Russia, Moscow has less room for maneuver than its power might suggest. Ukrainians and Georgians favor closer ties with Europe and Belarusians want free and fair elections and an end to dictatorship. Russia lacks the political and social appeal to dissuade them, or the financial capital to stem China’s economic encroachment to the South.

Where does this leave the West? Options are limited but not without utility. The West may continue to back the sovereignty, independence, and territorial integrity of all former Soviet states, including Russia. This support has built a reservoir of goodwill among many in the region, although not all.

Encouragement of democratic development and respect for human rights remains a bedrock Western priority, as President Joe Biden emphasizes. Armenia, Georgia, Moldova, and Ukraine may deserve priority for Western democratic energies. Beyond the democratic Baltic states, these countries have made the most progress.

On the security side, the provision of U.S. military training and equipment to Ukraine and Georgia could strengthen deterrence against further aggression. Previous U.S. attempts to cooperate with Russia on counterterrorism have been frustrating, but there are some common interests in the area around Russia.

There are few easy solutions to endemic challenges in a post-Soviet region, which Russia so heavily influences. Some of Moscow’s difficulties with neighbors could leave openings for the West. Opportunities to advance democracy and security might not be overlooked. The West has every interest in pursuing a strategy in the post-Soviet sphere that encourages cooperation among neighbors and discourages imperialistic behavior.

Kenneth Yalowitz is a Global Fellow at the Wilson Center and was U.S. Ambassador to Belarus and Georgia.

William Courtney is an adjunct senior fellow at the nonprofit, nonpartisan RAND Corporation and was U.S. Ambassador to Kazakhstan and Georgia.