Russia Is Not Happy with Trump's 'Reset' 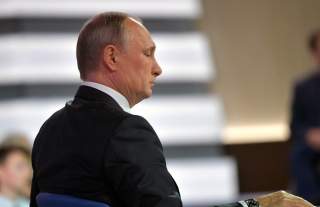 Several weeks after the Trump-Putin meeting at the G20 summit in Hamburg, U.S.-Russian relations show little signs of improvement. On the contrary, many in the Russian political establishment are increasingly exasperated with the American president’s inability to deliver on his campaign promise of better relations with Moscow. Should the lack progress continue or, as now seems more than likely in the form of additional congressional sanctions, further escalation occur, the Kremlin may well pursue a more confrontational policy towards the United States.

Following Donald Trump’s unexpected victory in last year’s presidential election, Moscow was cautiously optimistic about the new administration’s policy towards Russia. Alexey Pushkov, a Russian senator and former head of the State Duma’s Foreign Affairs Committee, told The National Interest that the positive feelings many in Russia felt towards Trump stemmed from two main reasons. First, they welcomed his public statements about Russia, which raised the possibility of a normalization of relations. Secondly, they found him clearly preferable to Hillary Clinton, whom they regarded as the “architect” of U.S. interventions in Libya and Syria, as well as the Obama administration’s “anti-Russian policy.”

Although Trump vowed to dramatically reshape American foreign policy on the campaign trail, he has yet to realize this pledge. Six months into his presidency, the former New York real estate mogul’s approach to international relations mostly mirrors that of his predecessors. After calling NATO obsolete as a candidate, President Trump walked back those comments during an April press conference with NATO secretary General Jens Stoltenberg. Even more significantly, the United States launched cruise missiles at a Syrian air base in early April following a chemical weapons attack in Idlib. This move infuriated the Kremlin, with Putin stating that under Trump, “The level of trust on a working level, especially on the military level, has not improved but has rather deteriorated.”

Beyond Trump not living up to his maverick statements on foreign policy, the intensity of the collusion allegations surrounding his campaign also dampened Moscow’s enthusiasm for Trump’s potential as a partner. According to Pushkov, Trump has “his hands and feet tied” when it comes to U.S. policy towards Russia, making it impossible for him to show flexibility on issues such as sanctions. He described the present situation as “a de-facto state of Cold War” in which bilateral contacts beyond Foreign Minister Sergei Lavrov and Secretary of State Rex Tillerson are practically nonexistent.

It was in this tense context that Trump and Putin met for the first time in Hamburg during the July 7–8 G20 summit. The two hour and fifteen-minute meeting covered a broad spectrum of issues in U.S.-Russian relations, although the contentious question of sanctions was noticeably absent. Ultimately, the crowning achievement of dialogue was a ceasefire in southwest Syria negotiated earlier on a working level. In addition to that agreement, the two presidents discussed forming a joint cybersecurity unit and the United States appointing a special envoy to Ukraine. Trump appeared pleased with the meeting, telling the press “We've had some very, very good talks.”

The reaction in Russia to the meeting was positive, but restrained. Several days after the G20 Summit, the National Interest spoke to Andranik Migranyan, a well-connected professor at the Moscow Institute of International Relations. He noted that while Russian leadership entered the meeting with “very low expectations,” it found the ceasefire on Syria and the good chemistry seen between the two leaders encouraging. Furthermore, Migranyan emphasized that in the current political climate, “the very occurrence of the meeting is important.”

However, for Moscow, the small victories achieved at the meeting between the two heads of state proved short lived. In the July 16 episode of his show, influential Russian State TV personality Dmitry Kiselyov, who is widely viewed as articulating the Kremlin perspective, described the early returns from the Trump-Putin meeting as disappointing. He bemoaned the fact that newly appointed U.S. Special Representative Kurt Volker had yet to meet with his Russian counterpart and that Trump backed away from cybersecurity cooperation on Twitter. In the end, he concluded that the meeting may have actually been “abnormally short” considering the outstanding number of problems in the bilateral relationship.

Beyond frustration over the implementation of agreements reached in Hamburg, Moscow is also losing patience over Washington’s reluctance to return its diplomatic compounds in New York and Maryland. In December 2016, the Obama administration took control of two Russian government owned waterfront properties and expelled thirty-five diplomats whom they alleged were Russian intelligence operatives. At the time, Russia declined to respond in kind because it did not want to complicate the incoming Trump administration’s efforts to improve relations. On July 14, however, Russian Ministry of Foreign Affairs spokesperson Maria Zakharova declared, “If there is no progress we will really have to take reciprocal measures.”

Russian leadership became especially incensed when the White House signaled that the return of these properties would be contingent on Russia meeting certain conditions. On July 13, Sebastian Gorka, deputy assistant to the president, told CNN’s Jake Tapper that the Trump administration might return the diplomatic compounds to Russia if it sees “good faith” on issues such as Syria. A few days later, RIA Novosti issued a report quoting a White House source, who said that Russia will not get the properties back “without something in return.” In response to these statements, Lavrov called talk of attaching conditions “theft in broad day light.” Chairman of the Russian Council of Federation’s Committee on International Affairs Konstantin Kosachev echoed the Foreign Minister’s criticisms, warning that if United States does not return compounds, Russia will be compelled to retaliate.

The diplomatic properties issue dominated Monday’s meeting between Deputy Foreign Minister Sergei Ryabkov and Under Secretary Thomas Shannon. Although the State Department claimed the discussion as “reflected a spirit of goodwill” from both sides, the Russians were clearly far from satisfied with the outcome. Speaking on the popular Russian political talk show, “60 Minutes,” Rybakov said that as far as his summit with Shannon was concerned, “Nothing that I could announce with pride occurred during the meeting.” Clearly, the matter is far from resolved.

At the core of Trump’s current predicament is that he lacks room for maneuver from both sides. In Moscow, there is little appetite for making concessions that might help Trump politically. Migranyan asserts that since the end of the Cold War, the United States sought to “weaken and humiliate” Russia by constantly expanding in the post-Soviet space. In his view, Russia has ceded enough ground over the past twenty-six years and is not prepared to show any more flexibility. Migranyan contends that Trump should be one to extend the olive branch since if he wants to pursue a tough approach towards China, “then he needs Russia’s help.”

The prospects of Trump gaining the necessary domestic leverage to make such a move appear slim. A recent poll found that 54 percent of Americans believe that Trump has had illegal or unethical dealings with Russia. Consequently, the general-public is unlikely to tolerate any deal perceived as favorable towards the Kremlin. Trump’s leverage on Capitol Hill does not appear much greater. In a testament to the enormous bipartisan support for a tougher line towards Putin, an amendment to the Iran sanctions bill strengthening and expanding current Russia sanctions passed by a margin of ninety-seven to two in the Senate last month. Recently, their counterparts in the House signaled that they would adopt a similar package this week. Trump is now widely expected to sign the sanctions bill—a bitter pill indeed for him to swallow. According to Sarah Huckabee Sanders, the new White House press secretary, on ABC News this past Sunday, “the administration is supportive of being tough on Russia, particularly in putting these sanctions in place.”

Such a development would also seriously damage Trump’s credibility in Moscow. Andrey Sushentsov, Program Director at the Valdai Club and an Associate Professor at Moscow State Institute of International Relations, states that if new sanctions are instituted, “Trump will be viewed as a weak president.” He notes that Russian leadership will regard Trump as an unreliable partner since Congress evidently disregards his position on the U.S.-Russian relationship.

Some in Russia already feel this way. “He can’t get anything done,” said Alexander Lukin, Head of the School of International Affairs at the Higher School of Economics, about President Trump. He cited not only Trump’s difficulty in getting Congress on board with his view on Russia as evidence of the president’s political powerlessness, but also his failure to execute his domestic agenda on issues like healthcare and immigration.

More broadly, if the present trajectory of bilateral relations continues its downward spiral, Sushentsov warns that Russia may conclude that its relationship with the United States will be adversarial for the foreseeable future. In that scenario, rather than feel pressure to offer concessions, as many hope in Congress, the Kremlin may be even less concerned with making sure that its foreign policy is agreeable to Washington, says Sushentsov. Lukin echoed this sentiment, telling the National Interest that further attempts to punish Russia would prompt it to continue strengthening and expanding its ties with China, rather than push it to seek reconciliation with the West. Lukin claimed that Congress is operating “under a false perception of Russia’s weakness,” and argued that if the United States could not pressure North Korea to make concessions, they would be even less successful attempting the same with Russia.