Russia's Relationship With China Is Growing Despite Setbacks 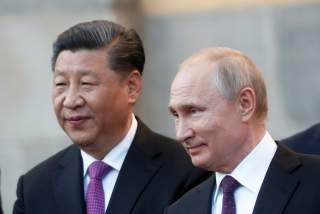 Russia has closed major border crossings with China across the Far East due to the rapid spread of coronavirus. That constitutes a significant blow to a trading relationship that had only just begun to fully blossom. The closures come just as new auto and rail bridges spanning the Amur River are finally reaching completion.

The primary line of debate among Russia-China relations analysts is whether the “rapprochement” is robust and tending toward even a genuine alliance or whether it is weak and has little to show for decades of cooperation other than a few rhetorical flourishes. After all, the skeptics note, if this bilateral relationship is so robust, then why did it take so long to get those bridges built?

The China-Russia trading relationship does indeed remain underdeveloped and will evidently face additional headwinds in the near future (along with all of China’s trading relationships, so it seems). But the importance of security ties can hardly be disputed, especially if one takes the long view. Could China have fought the United States to a stalemate in the Korean War without Soviet military assistance? Not a chance. More recently, Russia’s sale of high-tech air and naval weaponry during the 1990s and 2000s created a solid foundation for today’s muscle-bound dragon with both claws (DF-26) and sharp fangs (e.g. YJ-18). But will it go further?

One impressively comprehensive Russian appraisal begins by stating that “Russia had to look for various options for answering Washington’s actions” to withdraw from the INF Treaty. The same article notes somewhat ominously that the United States is preparing in case of “accidental nuclear war with Russia.” Employing the Russian acronym “SPRN” literally “warning systems against rocket attack [системы предупреждения о ракетном нападении]” for early warning system, this assessment also makes the important point that Russia’s SPRN has only recently completed a long process of upgrades meant to fill “gaps [разрывы]” caused by the collapse of the Soviet Union, when key facilities for early warning were located in non-Russian parts of the USSR.

The article quotes one Moscow defense expert, Igor Korotchenko [Игор Коротченко], as offering the following assessment: “This is really a huge contribution of Russia to strategic stability, since China receives a powerful tool in order not to become a victim of the first disarming blow from the United States.” Another Russian expert, Konstantin Sivkov [Константин Сивков], maintained that this move would enhance “global stability” but also articulated some concern with respect to Russia’s long-term interests. “When China has at its disposal all the technologies that Russia has at its disposal, or creates similar ones, it will cease to need Russia as a defender,” Sivkov said. “And this could adversely affect Russian-Chinese relations.” Korotchenko, however, is more bullish on the long-term prospects for the defense relationship with Beijing. He underlined the commercial prospects for Russian companies, and added that the early warning initiative will “contribute to the further rapprochement of Russia and China, building a common security policy [поспособствует дальнейшему сближению России и Китая, выстраиванию общей политики в области безопасности].”

That’s an interesting disagreement among Russian security specialists, for sure, but another rather significant observation regarding these developments was offered in this same article by the former deputy commander of Russia’s air defense command, Alexander Luzan [Александр Лузан]. He contends that Russia will benefit from the enhanced cooperation with Beijing on an early warning. Luzan explains that the ground components of Russia’s SPRN are comprised of []long range “Voronezh” [Воронеж] radars that can see out four thousand to six thousand kilometers to detect ICBM launches. Short-range “Sunflower [Подсолнухи]” radars are more suitable for warning of short-range launches, but also offer ship-detection capabilities. Directly reflecting on operational advantages for the Russian military, Luzan observes: “Vladivostok and Primorye are protected here, but there is nothing ‘in depth.’ We once tried to deploy our facilities in Mongolia, but it didn’t work out very well. Therefore, if the Chinese close this ‘tongue,’ it will be very important for Russia [Владивосток и Приморье у нас защищены, а ‘в глубину’ там ничего нет. Мы когда-то в Монголии пытались разместить свои комплексы, но не очень получилось. Потому если китайцы этот ‘язычок’ закроют, то для России это будет очень важно].” Again citing this Russian general, the article states that “a unified information space is created and data is exchanged with Chinese radars, [and therefore] ‘the security of our country from the east will be even better.’”

Such interpretations are generally in accord with the analysis of Vladimir Petrovsky [Владимир Петровский,], a senior fellow and military specialist at Moscow’s Institute of the Far East of the Russian Academy of Sciences. This analyst writes that many believe that Putin’s announcement of this strategic cooperation initiative at Valdai signals that “the military alliance between Russia and China . . . has finally become real.” Petrovsky also notes that other specialists have begun to speculate on the meaning of a “retaliatory strike” under such circumstances, wherein the early warning is relayed by a third country. He quotes the Russian president (speaking at Valdai) further on the matter of motives for new missile deployments in the Asia-Pacific region: “we suddenly heard from the American military that the first step in this direction would be taken just in Asia. But that step also impacts on us, because we need to understand: where in Asia, will Russian territory be endangered or not? By the way, it’s immediately clear what was the root cause of the exit: not Russia and not mythical violations of the [Intermediate-Range Nuclear Forces] Treaty by us. If they are going to put [U.S. missiles] in Asia, then Asia is the primary reason for withdrawing from this Treaty [вдруг услышали от американских военных, что первый шаг в этом направлении будет сделан как раз в Азии. Но он и нас затрагивает, потому что надо понять: где в Азии, будет доставать это российскую территорию или нет? Кстати говоря, сразу понятно, что было первопричиной выхода: не Россия и не мифические нарушения нами Договора. Если они собираются ставить в Азии, то Азия и является первопричиной выхода из этого Договора].” In other words, Putin’s announcement of this initiative to accelerate military cooperation with China is intended, in part, as a response to the United States' move to exit the INF accord.

Strongly hinting that Beijing might well gain access to Russian early-warning radars based in the Arctic, Petrovsky observes, “Taking into account geography, it is quite possible to develop protocols for the exchange of data between national SPRN.” He further contends that this early warning cooperation will be “mutually beneficial and not without compensation [эта помощь—взаимовыгодная и небезвозмездная].” This military expert explains that China still can learn from Russian radar proficiency, but also implies that the Russian side may gain some advantages from China’s evident prowess in microelectronics, for example. Moreover, he suggests, “a possible Chinese satellite constellation could be a good addition to Russian orbital facilities.” Still, Petrovsky concludes that Russia and China “are not creating a military-political alliance. It is rather a matter of coordinating the military policies.” Playing down the significance of this new initiative, this specialist also notes that Russia and China have been holding annual ballistic missile defense command and staff exercises for about a decade already.

Nevertheless, the growing strategic military cooperation between Moscow and Beijing can hardly be dismissed, especially after the country’s long-range bombers have flown their first joint patrol back in Sept 2019. There may be real limits to the Russia-China “quasi-alliance.” Major hiccups and road-blocks are certain to appear, not least the pandemic flu. But for now, the clear trend is a vector toward enhanced security collaboration between the Eurasian giants. As Petrovsky notes, "in general, cooperation will be built between strong countries [в целом сотрудничество будет строиться между сильными странами]."