Satellite Photos Show That China Is on a New Warpath 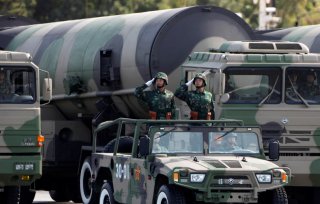 In 1962, a spy in the old USSR provided Great Britain’s intelligence service information that the Soviet Union was placing nuclear-armed missiles in Cuba. This intelligence included photographs of the planned installations. Britain passed that information on to the United States, which used U-2 spy planes to search for evidence of this collaboration. This scouting mission revealed that the missiles were in Cuba. President John F. Kennedy announced the news on Oct. 22, 1962, the same day that the new Minuteman intercontinental ballistic missiles went on alert.

The Soviets denied any such Cuban-based deployment. To counter this denial, the U.S. ambassador to the United Nations, Adlai Stevenson, provided photographic proof to the UN Security Council of the missile build-up. Kennedy announced an armed embargo of all further shipments to Cuba until the Soviets removed the missiles.

Soviet freighter ships, which were carrying more missiles, subsequently returned to the USSR as the existing missiles in Cuba were removed. This allowed the leaders of the Cold War countries to avoid a possible nuclear Armageddon. Kennedy would later underscore that the Minuteman missile—with a  capability of hitting the Soviet Union homeland from its mid-western basing—was his “ace in the hole.” It allowed him to bring the Cuban Missile Crisis to a close.

Supporters of the Soviet move to install missiles in Cuba explained that the U.S. nuclear-armed missiles in Turkey, for example, could strike the Soviet Union while Moscow had no similar capability to strike the United States mainland.

In short, Soviet leader Nikita Khrushchev was simply “restoring the strategic balance.” Most people didn’t know at the time that Kennedy secretly agreed to remove the military’s ​​nuclear-tipped, medium-range ballistic Jupiter missiles from Turkey in a deal with Khrushchev. This has often been cited by critics as an admission that the Soviet decision to place missiles in Cuba was understandable.

The new deployment of Minuteman missiles announced by Kennedy that October was the leverage the United States needed to end the crisis and restore U.S. deterrent capability against the Soviet Union—even as the Jupiter missiles were eventually removed from Turkey.

Fast forward some sixty years. The nuclear development now facing the United States and its allies is of Chinese not Soviet origin. Satellite photos unmistakably show that China is building 136–145 new ICBM silos in western China.

Is this serious stuff that should grab the attention of U.S. leaders? Is it an additional nuclear threat or a simple reasonable Chinese reaction to U.S. threats?

While the commander of U.S. Strategic Command, Admiral Charles Richard, has, for example, repeatedly warned Congress about the startling robust Chinese nuclear build-up now being undertaken, projecting that China would at least double its nuclear capability in the current decade, most of official Washington’s reaction to the Chinese nuclear surprise was muted.

China is building 145 new silos for nuclear-armed long-range ballistic missiles. This is roughly equivalent to building one of our ICBM Minuteman wings in North Dakota, Wyoming, or Montana. If the United States built such a missile wing today, then the cost, based on the original cost of Titan and Minuteman silo-based ICBMs, would be $17.4 billion.

Now, the Chinese have built railroad tracks with rail cars capable of carrying ICBMs. Additionally, they have tunneled into the mountains to hide such missiles. Former senior Office of the Secretary of Defense official Phillip Karber revealed this deployment some years ago and from his information, it is estimated the rail-mobile Chinese tunnel project cost $65 billion based on tunneling costs the Chinese government provided to the Israelis.

The noteworthy bit about the tunnels was the launch platforms outside of them. They are the exact distance that a Chinese ICBM is capable of flying in order to strike Air Force bases in Montana, Wyoming, and North Dakota—the three Minuteman ICBM bases, hardly indicative of a city-busting nuclear deterrent strategy.

But 136–145 silos are only somewhat less than 40 percent of the current of the U.S. military’s ICBM silos. So what is the concern? Well, that is a good question. The missile that would go in these silos is the Chinese DF-41. Each missile is capable of carrying six to ten warheads. In comparison, the Minuteman missile carries only one warhead and is a highly unattractive target.

That potentially gives the Chinese some 1360–1450 warheads. With ICBMs generally on alert 98–99% of the time, multiple warhead missiles are definitely a first-strike weapon of choice, according to nuclear expert Mark Schneider, a former top Office of the Secretary of Defense official and now a top scholar at the National Institute of Public Policy. Schneider recently authored a key assessment of Chinese nuclear forces.

Such alert levels mean the Chinese communists might have on alert 50 percent more  warheads than the United States now has on alert on a day-to-day basis. The United States has an estimated four hundred Minuteman warheads on four hundred missiles, plus an estimated four to six Ohio-class submarines at sea on patrol at any one time, each with twenty D-5 missiles and each missile with between four to five warheads. That would give the United States an estimated combined upward limit of one thousand on-alert ICBM and SLBM warheads. But that total is still some hundreds of fewer warheads on alert than just the new Chinese missile force could deploy.

More importantly, overall, including non-alert warheads, the United States generally deploys an estimated day to day 1550 warheads, including sixty strategic bombers that with special counting rules under the New START treaty can carry any number of cruise missiles and gravity bombs but still only count as sixty warheads.

Taking that factor into account, if the United States put some reasonable portion of its strategic nuclear bombers on alert, then it could have deployed some seventeen hundred to eighteen hundred nuclear warheads. Thus, China would have 136–145 new silos filled with DF-41 ICBMs. This only takes into account the current low estimate of China’s existing nuclear forces. This is serious stuff, just as the Soviet deployment of missiles in Cuba was serious stuff. The Soviets wanted to hold at risk dozens of American cities to prevent the United States from coming to the defense of its allies in NATO and Europe.

The Soviet objective was to sever the connection between the U.S. deterrent and the security of Europe, especially in the face of the Soviet Union and the Warsaw Pact to invade West Germany through the Fulda Gap with conventional forces far outstripping the NATO forces defending Bonn and Berlin.

Due to the U.S. and NATO conventional disadvantage, the U.S. nuclear deterrent was key to the defense of central Europe and NATO. After all, the long-term Soviet and now Russian goal has been to split the NATO alliance. Deploying threatening missiles in Cuba was central to that strategy.

Similarly, the Chinese build is not, as some apologists for China have claimed, simply a reasonable Chinese reaction to the U.S. nuclear modernization and supposed U.S.-led nuclear “arms race,” which is now underway. Also, it is not related to the previous deployment of U.S.national missile defenses in 2003–4.

The United States has forty-four interceptors. It uses these to deal with rogue state threats such as from North Korea and Iran. Apparently, some China experts are claiming it took China two decades to figure out that U.S. missile defenses required a huge expansion of China’s nuclear missile force.

But critics claim the United States might deploy sixty-six interceptors instead of forty-four of them. Even so, such defenses complicate a Chinese first strike against the United States but not any retaliatory capability. Thus, if China is building 1360–1450 new warheads, then it is not to overcome a very limited U.S. missile defense deployment. Instead, it is designed as a first- or pre-emptive strike capability to sustain Chinese aggression, such as a military action. This is similar to former Soviet designs on Western Europe.

The United States is not starting an arms race by modernizing its own nuclear deterrent and the Chinese are not simply following suit or catching up. The current U.S. nuclear modernization program was agreed upon in December 2010. No U.S. missile, submarine or bomber will go into the operational force until 2029 though.

On the other hand, the Chinese have been fully modernizing their nuclear force for the past decades and are putting new forces in the field regularly. At the very least, they will double their nuclear warhead levels within the decade, which has prompted Richard to raise the alarm of concern. Unfortunately, the Chinese cleverly appeal to the “always blame America” crowd and have an alternative explanation of the Chinese build to mask their intentions. Still, some experts assert an estimated 90 percent of the new Chinese silos will be filled with fake missile decoys.

Why worry then about only twelve real missiles? The People’s Republic of China would still have to build roughly 100-150 missiles for deployment and testing. That equates to three decades of testing with the testing consisting of three to five missiles per year. The estimated cost for the United States to build that many missiles plus the significant cost of silo construction would be $21–$23 billion. That figure doesn’t include warheads or a nuclear command, control, and communications network. So why would the Chinese pay the equivalent of $1.9 billion per missile to add just twelve missiles and 120 warheads to their current inventory?