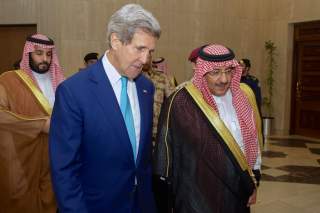 All eyes will be on Washington on Thursday as Saudi Arabia’s King Salman makes his first official visit to the United States—or anywhere else for that matter—since ascending the throne in January after the passing of his half-brother, King Abdullah. Some preliminary reports out of the Middle East are suggesting that the King might be accompanied by a large delegation comprised not only of senior officials, but also some well-known businessmen and prominent Saudi women. While the visit could mark a new era of improved relations between the two traditionally close allies, there is little doubt that the tumult that has gripped the Middle East since 2011 has put a strain on Saudi-U.S. relations.

Many observers have argued that the U.S. administration’s willingness to part ways with President Hosni Mubarak in Egypt, its sudden reversal on striking Bashar al-Assad’s forces in Syria after they had crossed President Obama’s self-imposed “red line” by using chemical weapons outside of Damascus in 2013 and the July signing of an agreement with Iran over its nuclear activities have led to a “rift” between Saudi Arabia and the United States. While talk of an even more serious “rupture” in relations should not be taken very seriously—Saudi Arabia and the United States have not sustained a mutually beneficial relationship for seven decades by happenstance—some Saudis have long advocated that Saudi Arabia needs to wean itself off from what they consider to be its overdependence on the United States as a strategic ally and trading partner. That’s where China comes in.

China cannot match the United States’ proven track record of projecting its military power in the Middle East. Nevertheless, there is wide agreement among Saudis that during a time of unprecedented turmoil in the region, it is vital to keep all their options open and to strengthen relations with as many regional and global powers as possible. As far as Saudi Arabia is concerned, the upside of closer relations with China far outweigh any potential downside.

The staunchly anti-communist Saudis were firmly in the U.S. camp during the Cold War. They even played an important role in supporting the Afghan “Mujahidin” in its war against the Soviet Union, which invaded the country in 1979 to prop up its allies there. Therefore, it should not come as a surprise that Saudi-Chinese relations were virtually nonexistent after the triumph of Mao Tse Tung and the communists in 1949. However, as the Soviet Union collapsed in 1989 and China slowly began liberalizing its economy, Saudi Arabia and China established diplomatic relations in 1990. Although relations developed slowly, today, there is a wide consensus among Saudi officials, businessmen and analysts that relations with China should not only be maintained, but should broaden in scope.

Not only has China’s demand for energy increased dramatically over the past two decades as its economy grew at a rapid clip, the International Energy Agency estimates that China’s imports from the Middle East will roughly double by 2035. As the shale revolution in the United States has led to increased domestic production and lower demand for Saudi imports, the Asian market has looked even more attractive. While the United States continues to be an important market for Saudi crude; China, Japan, South Korea and other Asian countries account for close to 70 percent of Saudi crude exports.

However, Saudi-Chinese energy relations extend beyond trade in crude and include sizable Saudi investments in Chinese refineries and Chinese companies helping develop Saudi Arabia’s own refineries and natural-gas fields. As Saudi Arabia’s own domestic energy needs have risen rapidly in recent years—electricity consumption has doubled since 2000—and are expected to continue to increase, policy makers have tried to meet increased demand by tapping into the kingdom’s natural gas, allowing more-lucrative crude to be exported. And while the results of the search for natural gas in Saudi Arabia have been disappointing, the Saudis have made real progress in expanding their refining capacity.

As the Saudis made a concerted effort to increase their capacity, China’s Sinopec stepped forward and partnered with Aramco to build a 400,000-barrel-a-day plant, which began exporting its first shipments in January of this year. Not surprisingly, the Saudis have also invested heavily in Chinese refineries to position themselves as the supplier of choice over the long term. Saudi Arabia’s Aramco has entered a joint venture with PetroChina Co and Yunnan Yuntianhua to build a 260,000-barrel-a-day refinery in China’s southwest. This is in addition to the refinery that Aramco manages in Fujian province along with Sinopec and MobilExxon.

China is now Saudi Arabia’s biggest trading partner period, with cheap and increasingly better-quality Chinese electronics, textiles and food products flooding the Saudi market. Trade between the two countries has been growing consistently and exceeded $72 billion last year. Chinese companies have also participated in some major construction projects in Saudi Arabia, including the Haramain railroad project that connects the two holy cities of Mecca and Medina via the port city of Jeddah.

However, while Saudi Arabia values the long-term potential of the Chinese market for Saudi crude, petrochemicals and refined oil products, the real appeal of Chinese relations for the Saudis is that they do not come with “strings attached.” Unlike the United States, which issues regular, annual reports that are often critical of Saudi Arabia’s treatment of religious minorities or that highlight the hardships of Saudi women, Chinese officials have consistently and intentionally avoided criticizing Saudi domestic or foreign policy. Instead, officials at all levels—from President Xi Jinping to staffers at the Chinese embassy in Riyadh—have praised the important role that Saudi Arabia plays in global energy markets, the Middle East and the broader Muslim world. They have also made it clear that China respects Saudi Arabia’s choice of a development path that “suits its own conditions.” Such deference is widely appreciated in Saudi Arabia, which has long maintained that as the custodian of Islam’s holiest places and birthplace of Islam, the road to reforming its political, social and economic institutions will be different than other developing countries. It is also not lost on the Saudis that the Chinese have a particular country in mind when they speak about their commitment to noninterference in the domestic affairs of other nations: the United States.

For their part, the Saudis have likewise rarely highlighted China’s controversial measures against its minority Muslims, especially the Uyghurs in its restive Western region of Xinjiang. For example, while Egypt’s most revered Islamic institution, Al Azhar, issued a statement condemning reports that China was preventing some of its Muslims from observing fasting during the holy month of Ramadan earlier this year, the equivalent official Saudi religious institutions did not. On the other hand, when Uyghur extremists targeted an open-air market killing dozens in May 2014, the Saudi government issued a statement condemning the “criminal” attack and framed it within its broader condemnation of all “terrorist” acts.

With the notable exception of the weeks following Iraq’s invasion of Kuwait in August 1990, one would be hard pressed to find a period of time in Saudi Arabia’s history when Saudis have had a more acute sense that they are facing a serious threat to their security than they currently do. The Saudis feel that they are being encircled by Iran on one end and the so-called Islamic State on the other. It is no wonder that Saudi Arabia spent some $80 billion dollars on both its defense and domestic-security needs last year. And while the United States remains by far the biggest supplier of weapons to the Saudis, the same thinking that has guided Saudi Arabia’s effort to diversify its economy has pushed the Saudis to lessen their dependence on a single weapons supplier. The Chinese have been more than happy to meet the Saudis’ needs in this arena as well.

It is fairly well documented that China provided Saudi Arabia with medium-range ballistic missiles in 1988. The consensus view is that the deal took place without the knowledge of the United States. A recent report by a prominent American investigative reporter has maintained that the Saudis bought a more sophisticated and accurate Chinese missile from China in 2007, only this time with U.S. knowledge. And unlike in the 1980s, the Saudis have become more transparent about their missile-defense capabilities. The older missiles were apparently even put on display during a military parade in May 2014. With ISIS on its northern border and the Houthis along its southern border, there is wide support in the kingdom for all matters and measures related to security.