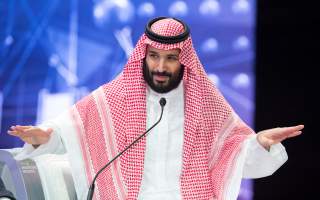 American values and interests are under threat in the Middle East. A murderous dictatorship has underwritten terrorism and continues to promote Islamic radicalism around the globe. The regime suppresses political dissent, persecutes non-Muslim faiths at home, and is pursuing military hegemony abroad. Despite a long and sometimes checkered relationship with the United States, this government threatens to undermine long-term Washington objectives.

No, it’s not Iran. The offending regime is the Kingdom of Saudi Arabia.

The kingdom’s American supporters laud the absolute monarchy as a long and valued ally. Former Secretary of State James Baker recently wrote: “Saudi Arabia has been an important strategic partner of the United States since President Franklin Roosevelt met with King Ibn Saud, the founder of the Saudi state, at the close of World War II.” However, from the very beginning the Saudi royals have been a profound embarrassment to the United States.

A violent clan that gained power with the help of the allied powers after World War I, the “House of Saud” cut a deal with fundamentalist Islamic clerics to enforce their dictates in return for theological endorsement. Even more than the Soviet Union, Saudi Arabia created a totalitarian state, enforcing strict religious, social and political codes.

The kingdom once mattered geopolitically, but no longer. It has lost its energy dominance. Its financial dependence makes use of its “oil weapon” impractical, even suicidal. No outside power threatens to take control of the region. As a natural rival of Iran, Riyadh doesn’t need Washington’s encouragement to balance Tehran.

In short, Saudi Arabia doesn’t much matter to America today.

But the Trump administration remains locked in the 1970s and 1980s. Which left officials adrift when confronted with the royal regime’s murder of journalist Jamal Khashoggi. A despotic Middle Eastern government organized a hit on a regime critic, who also was an American resident. The killing was carried out a consulate located in a U.S. treaty ally. The murder was well-organized; a diverse fifteen-man hit squad was dispatched; the body was disposed of using diplomatic cover, perhaps after being dismembered; a cover-up was organized, including the country’s de facto ruler.

The administration should respond vigorously. Had Iran, Syria, Russia, or another American adversary committed the crime, administration officials would be expressing outrage over the latest human-rights violation and demanding firm punishment. Ambassador Nikki Haley would be using her United Nations perch to denounce the atrocity. Washington would be threatening retaliation and organizing a multilateral response.

However, the fact that the criminals were America’s friends running the most repressive nation in the Middle East exposed U.S. policymakers as shameless hypocrites and frauds. Some who claimed to defend democracy instead acted as public relations agents for an antediluvian authoritarian monarchy. Far from inaugurating a new “American First” policy, President Donald Trump was acting as a front man for Washington’s foreign-policy establishment.

Indeed, the White House spent weeks attempting to minimize and even whitewash the Saudi role. The essential argument for sacrificing supposedly sacred U.S. principles to protect an obviously guilty regime—the essential truth was that Khashoggi entered the consulate but never emerged alive—was that the alliance was simply too important to risk. That view reflects a world which disappeared years, even decades ago.

The president appears fixated on “deals”—for oil, weapons, and other goods. “I don’t want to lose all of that investment that’s being made in our country,” he said. However, threats of retaliation are not serious. Ironically, though he touts his negotiating prowess, he has amateurishly handed the advantage to the beleaguered Saudi royals by suggesting that Riyadh holds all the economic cards.

Despite whispered threats of an oil boycott, which would have little impact in an international market, the royals will continue selling black gold: how would the crown prince afford his next yacht without the cash? Indeed, the royal family could not survive without the revenue. Moreover, the market is far more diverse today, including the United States as an increasing supplier. Other dangers have dissipated: The Soviet Union no longer exists, let alone threatens to invade the Mideast and cut off the West’s energy supplies.

As for Saudi purchases, the numbers used by the president are inflated. Moreover, the royals want military hardware and civilian goods for their own benefit; having filled their arsenal with U.S. weapons, diversification would come at a cost. America remains a destination and customer of choice. Even if the royals shifted their orders for more conventional goods to other suppliers and invested their cash in other, less desirable venues, the impact on America’s $20 trillion economy would be modest.

For many MbS fans, the issue is more about Iran than Saudi Arabia. The kingdom, it is routinely and relentlessly intoned, is a partner in containing Tehran. For some policymakers, nothing else matters. For instance, Daniel B. Shapiro, a former U.S. ambassador to Israel, once declared: “You need Saudi Arabia to be at the center of this coalition.”

Yet Tehran and Riyadh are natural rivals: Shia/Sunni, revolutionary/royal, ancient empire/artificial kingdom. Both are ruled by corrupt, ambitious autocracies. Both want to dominate the Middle East. There is no need for a Washington-orchestrated coalition to confront Iran.

America’s interest is best served by a regional balance of power. The administration’s current strategy, to encourage Saudi hegemony by arming the royals while demanding Iranian submission through sanctions and “negotiation,” is extremely foolish. Riyadh acts in its own interest, not that of the United States. Most of Crown Prince Mohammed bin Salman’s recent international moves—invading Yemen, kidnapping the Lebanese prime minister, funding jihadists in Syria, using troops to help the minority Sunni monarchy in Bahrain suppress the Shia majority, isolating and threatening Qatar—have made the Mideast more volatile and undermined U.S. interests.

Khashoggi’s murder offered yet the latest example of MbS’s recklessness. It is hard to imagine a better practical example of Lord Acton’s admonition that “power tends to corrupt and absolute power corrupts absolutely.” Hubris rules the Saudi court and its foreign policy. The crown prince is a threat to U.S. interests.

For some even Iran is not important—it obviously poses no security threat to America—but instead acts as a front for aiding Israel. The result is the curious spectacle of de facto Israeli lobbyists backing a fundamentalist Islamic regime which has spent decades spreading intolerant Wahhabist propaganda around the world. Although Wahhabism does not literally preach terrorism, its hatred of “the other” provides a foundation for violence, which permeates the Islamic world against indigenous religious minorities. And which is deployed against Israel, the United States, and other outsiders.

In any case, Israel, which possesses nuclear weapons and the region’s strongest conventional military, is quite capable of deterring Iran. And given the strong differences between Tehran and Riyadh, the United States need not attempt to bring the Kingdom together with either Israel informally or the other Gulf States more formally in an “Arab NATO.” Saudi Arabia is going to seek to counter-balance Iran whatever Washington’s involvement.

Moreover, if a Saudi-dominated Gulf security organization significantly weakened Tehran, one should not assume that Riyadh would use its enhanced power for good. MbS’ ambitions run far beyond defense against Iran, and there is no guarantee that he would not go on to confront Israel.

The Khashoggi murder provides Washington an opportunity to better balance its Middle Eastern policy. To start, Washington should loosen its ties with the totalitarian theocratic state which murders its critics. No more sword dancing and hand holding. No more intimate tete-a-tetes. Let the administration treat the relationship as truly transactional, with the two peoples making mutually beneficial deals and the two governments cooperating when circumstances warranted.

The most important response long has been good policy on its own facts: ending U.S. support for Riyadh’s brutal aggression in Yemen. Americans have no reason to assist the KSA (and United Arab Emirates) in reinstalling a puppet regime in one of the world’s poorest and least stable nations. There certainly is no reason to do so at such high human cost. Yet the United States is providing targeting assistance and refueling Saudi warplanes.

Moreover, Washington should end sales of munitions used to kill Yemeni civilians. It is one thing to inflate profits for arms makers by selling weapons to a dictatorship that happens to be an ally of convenience. It is quite another to provide bombs that are destroying school buses, hitting funerals, wrecking apartments, slaughtering wedding guests, and wiping out other civilian targets. U.S. policymakers have blood on their hands.

The president and his officials also should send a consistent message that the relationship will remain constrained so long as MbS effectively rules. Obviously, the KSA decides its leadership. However, the crown prince has proved himself to be thoughtless and reckless, his policies have had counterproductive, even dangerous consequences, and the instabilities which he has introduced to the Mideast will undermine regional security for years and perhaps decades to come. His reign could prove catastrophic, even if he wasn’t dispatching hit squads worldwide to smite his critics. America should approach its relations with Saudi Arabia accordingly.