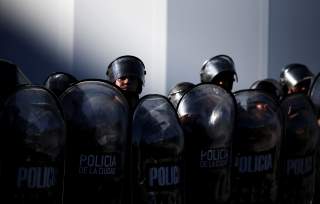 Russians refer to the 1962 Cuban Missile Crisis, often considered the closest the planet has come to nuclear apocalypse, as the “Caribbean Crisis [Карибский кризис].” Is the table now set for a second “Caribbean Crisis?” President Donald Trump has said that “all options are on the table” in the current Venezuela situation and National Security Advisor John Bolton triggered rumors of an imminent U.S. ground force deployment to Colombia. Meanwhile, President Vladimir Putin has sought to reassure Venezuela’s embattled leader Nicolás Maduro, and reports suggest that Russian contract soldiers are already on the ground.

To be sure, this iteration seems to be much less dangerous. While Russian strategic bombers paid a visit to Venezuela only a couple of months ago, signs do not appear to point to the outbreak of a massive U.S.-Russia clash of arms over Venezuela. Still, it is worth noting that Russia’s strategic forces were quite paltry back in 1962, compared to Moscow’s contemporary nuclear firepower. It will, indeed, be important to track Russian perceptions of the evolving crisis, which were summarized by Alexander Yermakov in the Russian newspaper Izvestiya. His work appeared under the headline: “We are going to Maracaibo: will the US begin a military campaign against Venezuela [Мы идем на Маракайбо: начнут ли США военную кампанию против Венесуэлы]” in early February 2019.

Yermakov charges that: “the American side makes a fog, on the one hand, avoiding direct answers to questions about planning a military scenario, and on the other, threatening Nicholas Maduro with ‘serious consequences’ for attempting to forcefully resolve the issue of divided power.” From the Russian perspective, Bolton’s briefing was “pouring fuel on the fire [Подлил масла в огонь]” and the Russians hardly missed the writing on the National Security Advisor’s notepad that said quite conspicuously, “5 thousand soldiers to Colombia [5 тыс. солдат в Колумбию].” Not surprisingly, the article also reviews decades of regime change policies (e.g. Chile 1973) in Latin America by the “North American elder brother.”

That unhappy history hardly constitutes a novel point, but Yermakov’s military analysis is interesting—perhaps in part because U.S. analysts have refrained from speculating in that regard, by and large. He explains initially that U.S. military operations are generally associated with air and naval power. He assesses: “The position of Venezuela on the coast of the Caribbean Sea is quite convenient—[The U.S.] can fully use the capabilities of the fleet and there is no need to use the airspace of third countries. [положение Венесуэлы на побережье Карибского моря достаточно удобно—по полной можно задействовать возможности флота и нет нужды пользоваться воздушным пространством третьих стран].”

On the issue of airpower, the analysis notes that “skirting Cuba [огибая Кубу]” sorties from U.S. air bases in Florida would make for a 2,500-kilometer trip—long for both machines and pilots. But Yermakov notes that the U.S. Air Force has also been flying long sorties to strike Syria and, after all, that Washington possesses a “huge fleet of tankers (three quarters of the world total) [огромный американский танкерный парк (три четверти мирового)].” The piece, moreover, speaks with some substantial admiration for America’s “strategic aviation.” U.S. Air Force heavy bombers B-1B or B-52H are not called “bombers” in Russian military lingo, but rather are referred to as “rocket carriers [ракетоносцы].” These bombers are estimated to be quite sufficient to the task.

As to the fleet, Yermakov claims that the USS Abraham Lincoln battle group is not far from America’s Atlantic shore and “at short notice, can be dispatched into the Caribbean.” The Russian author also concludes that if the carrier battle group suddenly breaks off its exercise routine and returns to port that “this might be one of the clearest signs of preparation for military aggression [может стать одним из наиболее ярких признаков подготовки военной агрессии].” Concerning the role of U.S. nuclear attack submarines, Yermakov says that a grouping may already be concentrated in the region, but that “for obvious reasons this information is not available in open sources [по очевидным причинам эта информация в открытых источниках отсутствует].” The expectation is that these submarines would be firing cruise missiles or “serving as bases for the activities of fleet special forces [послужить базой для действий флотского спецназа].”

This Russian analysis projects that the employment of U.S. special operations command is most likely in such circumstances, especially if a hypothetical U.S. military intervention is limited to “support of ‘local forces’.” For that, Yermakov suggests that the U.S. Army Green Beret [Зеленые берцы] of the 7th or 20th operational groups will be most appropriate as they specialize in Latin America. The Green Berets will be employed to support “allies in place,” while naval special forces are assessed to be used for intelligence and also for “direct sabotage missions [прямых диверсионных операций].”

As to the possible sending of major ground force units, such as “Bolton’s five thousand [пяти тысяч Болтона],” Yermakov suggests that option should be viewed critically. After all, if there is light resistance, they might “form an unpleasant picture of foreign occupiers.” But if there is heavy resistance, on the other hand, that could result in significant casualties, which “could also be extremely unpleasant for the U.S.” Thus, the Russian analysis yields the logical conclusion that any U.S. military intervention would likely be spearheaded by naval forces, along with strategic aviation.

The analysis concludes by stating that “Venezuela is far from being either Grenada or Panama [Венесуэла—далеко не Гренада или Панама].” Not much is said with respect to Russian weaponry. A couple of dozen Su-30s are mentioned, but the imported air defense systems (Pechora/Buk/Antey) are said to be most formidable and quite sufficient to cause American losses. Yermakov admits that a strong blow from the air against “loyalist” targets could turn the psychological momentum toward the opposition. But he also concludes that, if the Venezuelan military demonstrates strong allegiance to Maduro, then Washington will most likely prefer to stick with economic pressure.

Americans may examine this rather candid Russian appraisal and could be relieved to some extent. There is no mention of actual Russian expeditionary forces arriving to stem the tide, so we will evidently be spared the drama of a second “Caribbean Crisis” with nuclear overtones. Nor does Yermakov reveal any particularly surprising weapons systems that could really stymie U.S. forces. Yet, for those Americans concerned with a pattern of failed U.S. interventions, this sketch of a hypothetical American use of force against Venezuela is thoroughly vexing. Putting aside the military risks and greater damage to America’s already sullied reputation, street revolutions have still gone badly awry in recent years in settings as diverse as Syria, Ukraine, Congo and Myanmar. These precedents should make us extremely leery about promoting the overthrow of foreign regimes, even if those regimes are themselves odious. U.S. domestic political imperatives (e.g. gaining favor in the critical electoral state of Florida) should not obscure the obvious national foreign policy interest in regional stability, moderation, and restraint.