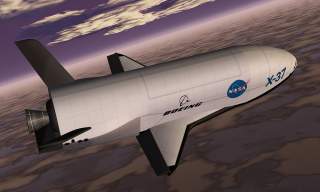 “Everything we know about space is changing,” according to former NASA physicist John Mankins.  Within a decade, the cost of launching into space will have dropped more than three orders of magnitude from the year 2000. Coupled with new systems and technologies, both states and private companies can turn the unthinkable into reality, even into the routine.

The economic opportunity of space development beckons, with profound changes in transportation, information, energy, and manufacturing promised in the next couple of decades. For example, space solar energy could deliver an unlimited supply of clean energy. If mastering “big data” is the key to the fourth industrial revolution, mastering space will be the key to the fifth. That could bring military advantage and existential risk. Finally, the opportunities for scientific knowledge and discovery remain abundant. But if the United States is to ensure it enjoys these benefits, then it will have to step up its activities with a realistic strategy in tandem with like-minded partners.

Just as the United States has long supported freedom of the seas, it also seeks open access to outer space. However, freedom of navigation in space is in jeopardy. States like China and Russia have a track-record of restricting others’ access to the global commons in both the maritime domain and cyberspace.  They are developing anti-space systems that they can use to deny states access to the global commons in space.  Meanwhile, it lacks the rules, standards, and enforcement mechanisms necessary to encourage states to exercise restraint and to clarify which actions are proportionate. As more players enter it, including non-state actors, the risk of a party disrupting open access to space will only increase.

In particular, the mounting competition to control cis-lunar space (the region between Earth and the Moon) is one that the United States cannot afford to lose. Both economic and security vital interests depend on it. The 2020s will see an unprecedented number of actors vying for advantage as they establish a permanent presence in Earth’s adjacent realm of space. Losing control of this region would prevent the United States and others from maintaining satellite networks, conducting experiments in orbit and on the moon, and developing new commercial services, like SpaceX's Starlink internet service and Blue Origin’s space tourism service.

You would not know it by the lack of public debate. While the United States engages in political division and introspection, other powers, especially China, are moving to seize the ultimate high ground.  China has a clear strategy and intends to become a world leader in Space by 2045. If Beijing were to move first to control cis-lunar space, then it could, in theory, render ICBMs obsolete and create not just a surveillance state but a surveillance planet.

Retired Air Force Lt. Gen. Steven Kwast, one of the leading proponents of U.S. space power, warns that America takes an enormous risk if it is second-best in space. “Space and its network potential to deliver power with speed and range so dominantly, so fast that whoever gets there first will have a determinant advantage,” says Kwast. “You will be able to paralyze the energy market anywhere on the planet for any society on the planet using solar power and directed energy in a malicious way, not in a way that uplifts the human condition.”

Without the fanfare of the Soviet-U.S. space race to the moon, a new great-power competition for the use of outer space is well underway. China could win without fighting by achieving the ultimate high ground.

The United States has taken several necessary steps toward facing a new reality. Credit the Trump administration’s revival of the National Space Council, coupled with the newly established U.S. Space Command, and an impending new U.S. Space Force, for helping to slow the pace of America's loss of superiority in space.  But without further action, the U.S. advantage in space will be further eclipsed in the decade ahead and beyond.

The United States needs to accelerate its 2017 strategy of preventing adversaries from gaining the military advantage in space. Retaining the lead requires three elements.

First, the United States must build the institutions, doctrine, and capabilities necessary to protect U.S. space assets and to safeguard a free and open space. On Thursday, the U.S.-China Economic and Security Review Commission released its 2019 Report to Congress, which included a package of recommendations that would help achieve this goal.

In terms of institutions, the report recommends that the White House’s National Space Council develop a plan to create a space commodities exchange. By spearheading this effort, the United States can ensure it drives the creation of international standards for interoperable commercial space capabilities.  Rule-setting is vital for guaranteeing high-quality, consistent rules and for ensuring U.S. firms can compete in the emerging space marketplace without changing the standards they already use.

The report also calls for an interagency strategy for maintaining U.S. preeminence in space. A whole-of-government approach should help assess long-term space resource issues and to protect space-related supply chains and manufacturing capacity. The report also recommends the Defense Department develop a doctrine that fully integrates Space into policy, training, and exercises.

The report further recommends that Congress and executive agencies bolster programs that increase survivability, redundancy, re-useability, resilience, rapid replacement, and the dispersion of critical U.S. space assets. A significant component of this support involves sustained, predictable funding for these programs in the annual defense budget.

Second, the United States needs to take advantage of the private sector’s capacity to accelerate innovation.  The primary way to foster private-sector innovation is through a combination of general government oversight and accountability, prudent government Requests for Proposals (RFPs), targeted tax breaks, and smart deregulation. Additionally, government support for long-range research and development projects, STEM programs, and international exchanges with like-minded allies and partners can drive technology advances that are too long-term to be commercially viable for the private sector.

Unleashing the U.S. private sector does not mean the U.S. government does not have an important role to play. Space operations are unforgiving, and failures can pose a significant danger to the general public.  The U.S. government should provide careful oversight to ensure private firms follow best practices and refrain from risky shortcuts. Through the RFP process, the government defines the specifications private firms must meet to win bids. These specifications provide a means for the government to set high standards for the industry.

Targeted tax breaks and selective deregulation can help even the playing field for U.S. firms that need to compete against state-owned or state-subsidized firms in China, Russia, and elsewhere. Space operations are expensive and carry a high risk of failure, even when following best practices. Tax breaks tied to space activity reduce the costs of investments, which make the risks more tolerable and expands the pool of investment capital available for these projects. Selective deregulation that does not introduce significant new safety or environmental risks can achieve a similar effect, making space projects less costly and investment more lucrative.

During the Cold War, America made a concerted effort to leap ahead in critical technology by investing in farsighted research and development programs. For instance, the American government catalyzed projects like the ARPANET and funded STEM programs that produced a pipeline of young talent. It also forged international exchanges with like-minded partners like Europe, Canada, Japan, India, and Australia.  Today, we are on the cusp of breakthroughs in space-related technologies ranging from rocket propulsion to robotics to computing.  The investments we make today in R&D, education, and partnerships will dictate whether we lead the way in space tomorrow or pay China to ride with them instead.

Setting the Rules and Standards in Space

Finally, the United States needs to take the lead in the long-haul international effort to codify more detailed rules and standards for activity in space. As recommended by the U.S.-China Commission's Report to Congress, the United States needs to “actively participate in international space governance institutions to shape their development” and to ensure the rules they set will reflect the U.S. vision for a free and open space domain.

A  set of five broad treaties and five principles loosely govern current activity in space.  These treaties do not tackle hard issues like procedures for maneuvering around other parties, notifying others of planned events, or prohibited interference with other space assets.  There is a rising risk of accidents in space as the domain becomes more congested with both state and non-state actors. As reversible “soft-kill” capabilities in the form of cyber-attacks, signal jamming, and laser dazzling proliferate, the risk of miscalculated aggression and accidental escalation also increases. Clarifying standard operating procedures and redlines, even in a non-binding agreement like Europe’s proposed code of conduct, is a necessary step to make space safer for commerce, science, and exploration.