Is the Senate’s Rejection of Trump’s Emergency Plan a Turning Point? 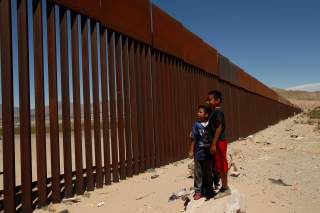 President Donald Trump is on the defensive. The Republican Senate has bucked the administration’s line and voted to send two resolutions that Trump has promised to veto. “VETO!” the President tweeted shortly after today’s Senate vote. “I look forward to VETOING the just passed Democrat inspired Resolution which would OPEN BORDERS while increasing Crime, Drugs, and Trafficking in our Country. I thank all of the Strong Republicans who voted to support Border Security and our desperately needed WALL!” said a following tweet.

The afternoon vote was preceded by a line of senators eager to support or reject the terminating resolution on the record. Critics consistently talked about the situation on the border and the issue of illegal immigration, while supporters continually made legal and constitutional objections.

Senate Majority Leader Mitch McConnell (R-KY) declared that matters are the facts, and the fact is that there is an emergency along the U.S.-Mexico border. McConnell said he opposes “misusing resolutions to give opinions on general matters,” the same reason he opposed yesterday’s resolution on Yemen. Senate Minority Leader Chuck Schumer (D-NY) responded by contending that Donald Trump’s type of presidential leadership is unprecedented in U.S. history. Out of all the previous presidents, “none seem to equate their own ego with the entire functioning of the government of the United States.” According to Schumer, today’s vote was not about a border wall, but it was about sustaining legal restraints on the president.

Lamar Alexander took to the podium, the first Republican speaker of the day voting in favor of the terminating resolution. He said he believes there is an emergency on the border, and that President Trump can and should build a wall using funds already appropriated to him. But he doesn’t need a national emergency to do it.

“We have reached a crisis. But it’s not a constitutional crisis, it’s a crisis on the border. It’s a crisis of American sovereignty,” said Senator Tom Cotton (R-AK) as he opened his remarks. Cotton has built a reputation as one of the firmest immigration restrictionists in the Senate, having previously co-sponsored the RAISE Act which would cut legal immigration by 50 percent. Cotton blamed the problem of children being brought to the border by migrants on “stupid laws and activist judges.” When it came to an American citizen dying of a drug overdose, Cotton said that “the poison in his blood stream floats across the Mexican border.”

The normally soft-spoken Michael Bennet (D-CO) gave an impassioned speech in favor of the resolution. He claimed that President Trump doesn’t care about the rule of law, separation of powers, or an independent judiciary. According to Bennet, Trump is “stealing” the money to build the wall and “stealing our farms and ranches” to build it on. He continued to give a strong critique of eminent domain and the president’s longtime support for it as a real estate developer. Like his colleagues, Bennet didn’t understand why Republicans were giving up conservative principles of limited government for a “tawdry exchange” of just $3.6 billion. Warning of the development of China’s Belt and Road Initiative, he said the United States was being surpassed because it frittered away the American people’s time on broken promises. For a senator who has been quietly visiting Iowa in a stealth presidential campaign, Michael Bennet’s fervent address had the vibe of an announcement speech.

Like Alexander, Portman said he believes there are multiple emergencies at the border, including a humanitarian one, but he does not believe a national emergency declaration is the correct route. He emphasized at length that President Trump has almost $6 billion in non-military construction funding sources that he can utilize without stepping into military appropriations.

The most surprising speech of the day came from Senator Thom Tillis (R-NC). A supporter of comprehensive immigration reform, Tillis wrote an op-ed in the Washington Post three weeks ago explaining why he would vote to support a resolution terminating Trump’s national emergency. “There is no intellectual honesty in now turning around and arguing that there’s an imaginary asterisk attached to executive overreach—that it’s acceptable for my party but not thy party,” wrote Tillis. But this afternoon he stood on the floor of Congress to announce he had changed his mind, and that after conversations with Vice President Mike Pence he decided he’d prefer to work alongside the White House to find an agreeable solution. He accepted President Trump’s promise that he’d seek to amend the National Emergencies Act at a later date to restrain the president’s power.

The defection of twelve senators against one of Donald Trump’s most controversial actions is a political setback for the president. Combined with the vote on Yemen, it might be a turning point in his ability to direct congressional Republicans.