Should Trump Worry About the Putin-Xi Meeting? 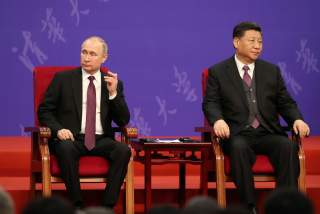 Russian president Vladimir Putin left his meeting with North Korea’s Kim Jong-un to journey to Beijing. The former’s destination: a forum on China’s infamous Belt and Road initiative, where Putin announced the approval of a toll road tying Belarus to Kazakhstan.

The more important objective, though, for the Russian leader was meeting with Chinese president Xi Jinping. The former lauded Belt and Road “an extremely important initiative” and said the two countries’ ties had reached “an unprecedentedly high level.”

In fact, neither statement is true. The two governments haggled over Russian support for that single project for six years, and the road isn’t scheduled to be completed until 2024. If and when it actually opens is anyone’s guess. This suggests something other than “an extremely important initiative.”

The bilateral relationship is better than at many points in the past, but it remains superficial. Last fall when the two leaders met, Putin announced: “We have established trust-based relations on the political, security and defense tracks.” That was similarly overstated since trust plays a minimal part of the China-Russia relationship.

Yet the People’s Republic of China (PRC) treats the sanctity of Russian military technology about the same as the former handles American business secrets. The PRC extended its economic ties throughout Central Asia, states once part of the Soviet Union. In the Asia-Pacific, the Chinese navy grew to vie with the American fleet for dominance, while Russian ships rusted away in port. Population rich and commercially aggressive China appears poised to absorb Russia’s sparsely populated east. Theirs is anything but a relationship forged in heaven.

However, Beijing and Moscow share one very big objective: resist U.S. dominance. Washington expanded NATO up to Russia’s borders; America’s navy patrols the Asia-Pacific and treats those waters as an American lake. Elsewhere there is no issue upon which Washington fails to sanctimoniously pronounce its opinion and piously attempt to enforce its judgment.

That alone would be enough to irritate leaders of proud nations with long histories. However, U.S. policy is consistently deployed against friends and allies of China and Russia, such as North Korea, Cuba, Serbia, and Syria. Moreover, Washington uses regime change, in Georgia and Ukraine, for instance, to further transform the international balance of power.

More broadly, both Russia and China oppose America’s use of its economic power to browbeat the two nations. There are direct U.S. penalties, for instance restricting Russian access to sophisticated oil technology. Worse is Washington’s use of secondary sanctions, which punishes anyone anywhere if they deal with the targeted nations. Hence the recent U.S. directive that Beijing must end imports of Iranian oil.

Thus, Washington has done much to bring its two leading adversaries together. However, hostility is a limited basis for agreement. There is no military alliance, despite Chinese participation in a Russian military exercise last fall. Neither government is interested in going to war with America and certainly not over the other’s grievances. A shared sense of threat could change that, but extraordinarily sustained and maladroit U.S. policies would be required to create that atmosphere.

When the two countries otherwise act for similar purposes, it usually is independently, even competitively, rather than cooperatively. For instance, both are active in Cuba, contra Washington’s long-failed policy of starving the regime into submission. Beijing and Moscow also are both supporting Venezuela’s beleaguered Maduro government. However, China and Russia appear to be focused on advancing their own government’s influence, even against that of the other.

Both nations have a United Nations Security Council veto, though the PRC traditionally has preferred to abstain, achieving little, rather than cast a veto. However, working together they could more effectively reshape allied proposals for UN action. They could do much the same in other multilateral organizations, though usually without having a veto.

The real test for having an “unprecedentedly high level” relationship would be to coordinate diplomatic campaigns against U.S. policies. Working together they are more likely to split off American allies and friends from unpopular initiatives, such as unilateral sanction campaigns. Europe is more likely to cooperate if the PRC, valued for its economic connections, joined Russia, still distrusted for its confrontation with Ukraine and interference in domestic European politics. So far this former communist “axis” has been mostly an inconvenience for the United States, rather than a significant hindrance,

Still, that could change if the Trump administration makes ever more extraordinary assertions of unilateral power. Washington officials appear to sense the possibilities, having periodically whined about cooperation between China and Russia, apparently ill-prepared for any organized opposition to U.S. policies.

Washington should act to foreclose any close combinations against America. Over the long term the greatest challenge to America—and certainly the greatest military threat—likely is posed by Beijing, a superpower in waiting, rather than Moscow, now a regional power with only limited global reach. Europe alone is able to constrain Moscow, while China’s neighbors are less well organized. Moreover, Asia is likely to grow ever more important economically, as Europe fades relatively.

Thus, it would be in Washington’s interest to add heft to a neighborly coalition against the PRC. The best and easiest way to do so would be to seek a modus vivendi with Russia, which has no fundamental interests in conflict with Europe or America, once they stop challenging its security along its border. Given its history and culture, Moscow would more naturally line up with Europe and the United States than China.

Any solution requires recognizing that Crimea is not going back to Ukraine, absent a catastrophic Russian military defeat. Moreover, the West should offer to close off NATO expansion, ending the alliance’s steady advance toward Russia. In return for that, along with sanctions relief, Russia should end support for Ukrainian separatists. Kiev might not be happy being barred from the alliance, but membership should be limited to those states whose membership actually make America more secure. Moreover, for Ukraine peace with Moscow with NATO as a possibility is better than war with Moscow with NATO as an unrealistic possibility.

That doesn’t mean an agreement would make all conflict disappear from allied relationships with Moscow. However, their contacts would become much more normal, encouraging cooperation in other areas—including to counter Chinese excesses, which are as likely to affect Russia as any of the PRC’s other neighbors.

In a sense, the Putin-Xi meeting was much ado about nothing. The relationship revolves around what they are against, which mostly is the United States. They would have little to talk about other than the latest grievance about America to express or American activity to counter.

Unfortunately, for quite some time Washington has seemed determined to give both China and Russia good cause for discontent. Instead, in response, Washington should do its best to eliminate behaviors which bring its two most important competitors together. Then the United States wouldn’t need to worry what Presidents Putin and Xi were saying to one another.