Should We Just Let the Army Do It? 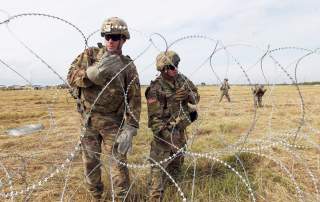 The first and foremost is legality. Each request should be evaluated in terms of compliance with the existing laws of that state and its international commitments. Is the request, and the manner in which it has been made, compliant with the laws of the land, in particular with the constitution and those laws which have been established to govern the employment of the armed forces? While many states, such as Germany and the United States, have laws restricting the domestic deployment of armed forces, others, notably France, do not have such restrictions. There may also be exceptional events though—such as major catastrophes or outbreaks of highly contagious diseases, resulting in the breakdown of law and order—which may require capabilities that only the military may be able to provide, even if that employment contravenes the legal construct.

The second criterion is that of lethality, which considers whether the military may be required, as part of the provision of support, to employ force. The issue of the use of force in domestic contingencies is fraught with danger. Lethality also considers the possibility that some other force—whether it comes from lone wolf attacks, a domestic insurgency or an armed insurrection—may be used against those military forces engaged in DSCA efforts. The potential for the employment of force may require that the military be provided with special equipment and training and be issued appropriate rules of engagement. As a general rule, military forces in support of civil authorities should always seek to avoid the use of deadly force except in extreme situations. Nevertheless, circumstances may require the use of lethal force for the purposes of self-defense or preventing greater harm to the population, as might be the case in an outbreak of a highly contagious and deadly epidemic.

Risk is the third criteria governing the employment of armed forces in DSCA operations. While similar to lethality, risk is more concerned with the safety of the soldiers on DSCA missions. In particular, it seeks to evaluate whether there is enhanced risk to the safety and health of those soldiers who, in the process of performing a task, may be exposed to harmful agents, such as biological or chemical toxins, or be required to undertake hazardous acts, such as rescuing civilian personnel or extinguishing large fires. For example, containing a bird flu epidemic may expose troops to the disease; likewise, decontaminating an area with radiation or chemical contamination poses risks to the force given this task.

Risk further seeks to determine the long-term physical and psychological effects on the force of carrying out tasks which may be disagreeable, such as the collection and disposition of large numbers of fatal casualties pursuant to a major disaster. An example of this risk is the stabbing of a French soldier that was engaging in anti-terrorist patrols under the French Opération Sentinelle at the Louvre, or the 2017 event in which an inebriated tourist attempted to wrest a submachine gun from an Italian soldier guarding the Spanish embassy in Rome. Putting soldiers on the streets in uniform may provide an increased sense of security, but it also may render them more vulnerable to attack.

Readiness is the fourth criterion. Armed forces exist to defend the nation against external threats; to the extent that they are engaged in DSCA tasks, they may not be available to carry out their primary missions of national defense. For those DSCA tasks which have little relationship to military functions, such as, say, trash collection, and which may be of long duration, there may be a degree of erosion of primary military skills, such as tank gunnery or artillery fire support, which will require time, effort and resources to recover. Readiness also seeks to measure the opportunity costs associated with the military’s ability to perform other military and DSCA functions. If the military, or parts of it, is engaged in DSCA tasks, it may not be available to perform other tasks in a reasonable amount of time.

The fifth consideration for evaluating an RFA is that of cost. The issue of who pays for the military’s involvement in DSCA functions is of increasing importance. Many DSCA missions and tasks can involve considerable expenditure of resources. For example, if the military provides disaster relief support to civil authorities in the aftermath of a major disaster, this would involve the expenditure of significant amounts of money for supplies and transportation, in addition to the general personnel costs involved. In Europe, these costs are, in some cases, born by the ministry of defense itself; in others, the ministry of defense can expect to be reimbursed for some or all of these costs by the ministry or agency to which assistance is being provided. These considerations should be laid out well in advance of the need for the military’s support. In the United States, the requesting agency is, at least in theory, obligated to reimburse the armed forces for their operations costs.

The last criterion is that of appropriateness. This criterion seeks to answer the question of whether it is right, or seen by the public to be right, for the military to carry out a DSCA task. This issue is connected to the larger issue of the image of the armed forces. Appropriateness is also concerned with the question of whether it is in the interest of the ministry of defense to conduct the task. In cases of disaster relief, the military almost always will answer in the affirmative; but there are instances, particularly those involving the potential use of lethal force against citizens, which may be viewed by the military as inappropriate and detrimental to its image. In some instances, there may be a divergence in the image that the soldiers themselves have regarding a task versus what the public sees. For example, the Italian Army’s trash collection efforts in Naples, while less than attractive for professional soldiers, were viewed in a very positive manner by the public.

While these six criteria are those which most often govern the military’s evaluation of an RFA, there may be others, such as the consideration of whether the military has the capacity, in terms of numbers of soldiers or their training, to provide assistance. The military, because of deployments or other engagements, may simply lack the surge capability to provide support. This is likely to increasingly be the case, as both active and reserve forces decline in number in many European states.

Likewise, the armed forces should not, as a routine matter, provide border security. They can, and should, provide support to law enforcement entities who are principally charged with securing the border; but armed forces should be constrained to a support role only, and then only in exceptional circumstances, such as during the wave of refugees that attempted to enter Europe during the summer of 2015.

But, given the increasing requirements for security both in the cyber and border realms, as well as many other domestic contingencies, it seems obvious that senior military leaders in Europe and North America may be increasingly willing to overlook some of these considerations. This is due to their desires to maintain military capacity, and senior political leaders may be unaware or prefer not to recognize some of these criteria.

Nevertheless, it is important that a solid basis be established for those contingencies in which the military is likely to become involved, particularly with regard to legal constraints on employing soldiers at home. The criteria set forth in this article are designed to serve as guidelines for consideration by political and military leaders when contemplating if they should “just let the army do it.”