So Much for Suez: What Britain's Tanker Crisis with Iran in the Gulf Really Means 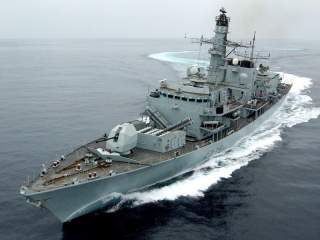 Last week’s seizure of a British tanker in the Persian Gulf is nothing short of shocking.

The Swedish-owned and British-flagged oil tanker Stena Impero was intercepted en route to Saudi Arabia when it was attacked. The daring raid as captured, if not choreographed, by Iranian state television saw soldiers of Iran’s elite Revolutionary Guards Corps rappel from helicopters to the deck, with fast attack ships running circles around the vessel.

Yet the most interesting detail is that the British frigate HMS Montrose was in the Gulf, arriving “ten minutes too late” to prevent the attack. Moreover, the crew of the Montrose contacted the Iranians, warning them to stand down, words that were completely ignored by Iranian forces.

So much for a robust deployment East of Suez.

It appears that, in the short term, this crisis is the result of a convergence of factors spurred on by the unsolved national predicament that is Brexit.

Functionally, Britain was leaderless as Iranian forces boarded the vessel. Prime Minister Theresa May was a lame-duck, unable to act as the Conservative Party elected a successor. Tuesday, they chose Boris Johnson as the next prime minister, but his first priority is Brexit, not Iran.

Moreover, it appears Britain was led on, then abandoned by its American allies. Britain had resisted pressure by the Trump administration to conform to its “maximum pressure campaign,” including the use of strict sanctions on its commercial trade against Iran. Yet, reporting suggests Britain was duped into provoking Iran by seizing an Iranian tanker passing through Gibraltar earlier in July as it allegedly steamed towards a Syrian oil refinery in violation of United Nations sanctions.

After reports emerged of British marines storming the tanker and detaining it at harbor, Iran warned Britain’s actions set “a dangerous precedent”—a prediction it has now fulfilled.

In fact, Iran’s actions have been laser targeted towards Britain. Just consider the same day of the Stena Impero’s capture, Iranian forces stopped the British-owned but Liberian-flagged tanker Mesdar, which was released. Given the Stena Impero is Swedish owned, this seems to be a direct indication to international shipping firms that sailing under British sovereignty is itself a liability.

The Financial Times reports insurance rates on maritime shipping has already increased eight to ten times in as many weeks—a price which will certainly increase on British flagged vessels.

In response, the government practically admitted it cannot protect its own vessels in the Gulf.

Left at the Altar

In this time of crisis, it seems Britain’s security partners are nowhere to be found.

Thus, it is unlikely any coalition of European nations will threaten Iran to return the tanker. Britain could return to sanctions against Iran, but that would be ineffective without EU support.

Britain has thus been caught in a trap of its own making. After Brexit, policymakers have tried to balance Britain’s foreign policy away from the EU, reemphasizing the Atlantic partnership with the United States. The seizure of the Iranian tanker in Gibraltar was thus an attempt to appease Britain’s hawkish American ally in Washington, despite hoping to continue trading with Iran.

Yet, whereas the U.S. military can sustain a provocative gesture without challenge, Britain cannot. Although the United States called for an international naval task force to stabilize the Gulf some time ago, they too have distanced themselves from the crisis with Secretary of State Pompeo clarifying in an interview, “The UK must be responsible for the safety of its own ships in the Gulf.”

It seems Britain is truly alone.

These current developments are a far cry from recent history.

In fact, the modern Persian Gulf is really a construction of Britain’s policy East of Suez.

Until the nineteenth century, the small coastal communities south of the Iraqi city of Basra were political nonentities on the international stage. Then, the British Empire, in need of naval bases to protect the maritime reaches to its wealthiest dominion of India, annexed the littorals of the Persian Gulf and Malaya.

Through a series of treaties with local dependencies under the guise of ending piracy, Britain obtained the exclusive sphere of military and commercial influence it required. In exchange, it legitimized the autonomy of various small ruling families creating the states of Kuwait, Bahrain, Qatar, and the Trucial States (now the UAE) at the expense of regional empires like Oman. It is for this reason the Persian Gulf and Southeast Asia continue to have many ruling monarchies.

With the loss of the Raj in 1947, Britain was forced to rebalance towards these backwater dependencies suddenly made profitable by the discovery of oil. The discovery breathed new life into an empire that relied on sterling-denominated oil to buttress its great power status.

The balance of payments crisis in 1967, and resulting withdrawal East of Suez in 1971 did not change this fundamental strategic calculus. Oman, Bahrain, Malaysia, Brunei and others remained allies of Britain, with entrenched networks of economic and security interests from the presence of British oil companies and banks to the education of governing elites at Sandhurst.

Even after national oil companies and dollar-denominated petroleum came to dominate the market, the Persian Gulf remained a lucrative asset for Britain through the modern arms trade. In fact, it is on the basis of these lucrative investments in British weapons systems and the City of London by Gulf monarchies that Britain has formed a new policy to “return” East of Suez.

This policy was first articulated by none other than the former foreign secretary Boris Johnson. In a keynote speech at the 2016 Manama Forum, the future prime minister declared, “Britain is back East of Suez,” with plans to secure the Gulf. Beyond arms sales is a revitalization of military installations, joint exercises, and intelligence sharing from Bahrain to Brunei. There is also a permanent Joint Logistics Support Base at the Beijing-built deep-water port of Duqm in Oman, capable of housing Britain’s new Queen Elizabeth-class of aircraft carriers.

Why is this important? Because Britain claimed the Stena Impero was seized in Omani waters.

Reports indicate the Stena Impero was captured sailing some kilometers off the Musandam Peninsula—an Omani exclave whose promontory forms the Straits of Hormuz. It is arguably the most strategic piece of real estate in the Gulf. Even if the tanker was technically in Iranian or international waters, the fact that an aggressive foreign power can militarily violate international law through only a stone’s throw away from the Royal Navy is disturbing to say the least.

Disturbing that is for Oman. The sultanate imports around £2 billion of arms from the United Kingdom and houses at least three top-secret intelligence collection facilities. That’s not to mention the planned naval station at Duqm and a permanent Oman-British Joint Training facility. Oman is Britain’s unsinkable carrier in the region, located at the most strategic point of the Persian Gulf, yet the Royal Navy cannot even secure a tanker right sailing right outside the front door.

That is because Britain’s return East of Suez so far is a farce. The “real” return of Britain is a set of lucrative defense contracts, extorting old colonial relationships for profit. This maintains Britain’s historic economic policy to sustain the City of London as a global center of commerce.

As for security policy, the reality is that Britain lacks the capability to protect its maritime interests. It has invested heavily in its new flagship carriers at the expense of its surface fleet. Yet, they are not yet completed, nor can they operate without the American F-35 next-gen fighter. While the country does have many frigates and destroyers, the list of allies and small dependencies that must be supported extends from the Falklands to the South China Sea. Britain can only spare one frigate/destroyer in the Gulf outside of a crisis. That is clearly not enough to defend British shipping or local allies from an increasing variety of regional threats.

For a nation like Oman, this creates a rather dangerous predicament.

The reality is Gulf countries do not buy British (and American) weapons for their own protection, they buy arms to ensure Britain (and the West) provides for their protection.

Certainly, Oman’s close defense relationship with the United States, including around $1 billion USD in arms exports and American naval access at Duqm should be enough to assuage any fears in Muscat of ambitious Iranian guardsman crossing the straits.

That may be the case, but Britain is as untrusted in its capabilities America is in its commitments. Just consider the attempted invasion-coup of Qatar in 2017 at the behest of Saudi Arabia and the UAE. Reporting suggests the presence of America’s largest military base in the region did not phase the Trump administration until then-Secretary of State Rex Tillerson intervened.