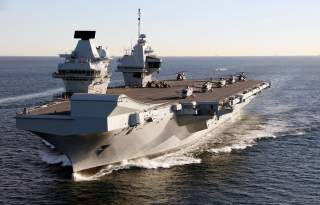 Over the past week, British pilots from the Royal Navy and the Royal Air Force tested landing the Lockheed Martin F-35B short takeoff/vertical-landing (STOVL) version of the Joint Strike Fighter onboard the brand new HMS Queen Elizabeth off the East Coast of the United States during nighttime operations.

“The concept of night flying isn’t difficult for us - what we are looking at is what the new lights on board HMS Queen Elizabeth look like at night from the perspective of the F-35s,” Royal Navy Commander James Blackmore, HMS Queen Elizabeth’s Commander Air, said. “We’ve already done that with the rotary wing aircraft earlier this year, but now it’s crucial that we understand how suitable they are for the F-35s to operate at night from the carrier. First indications are that they are in good order for both the aided and unaided perspectives.”

Working together with the United States, British pilots started testing onboard HMS Queen Elizabeth on September 25 when Royal Navy Commander Nathan Gray and RAF Squadron Leader Andy Edgell became the first pilots to land their F-35Bs onboard the 65,000-ton vessel. Eventually, the testers moved to night carrier landings—first using ambient lighting but then progressing to using the F-35B‘s advanced night vision systems. The testers used a step-by-step approach because of the difficulty of operating onboard a carrier at night.

“In daytime there are cues that tell the pilot’s brain what the relative motion is between the airplane and the ship,” Andrew Maack, chief test engineer for the Pentagon’s F-35 Integrated Test Force, said. “At night, especially very dark night, all those cues go away and you become dependent on exactly what the lights are and what the sight of those lights looks like. It’s something you can’t translate in your mind ahead of time – you don’t know it until you see it.”

Successful trials with the F-35B onboard HMS Queen Elizabeth will mean that Great Britain will once again be able to project power from the sea. “The largest warship in British history is joining forces with the most advanced fighter jets on the planet,” British Defense Secretary Gavin Williamson said in September. “This marks a rebirth of our power to strike decisively from the seas anywhere in the world.”

Unlike U.S. Navy carriers, which feature catapults and arresting gear, the British carrier are designed to operate STOVL aircraft only. “The Queen Elizabeth-class carriers have been specifically designed and built to operate the F-35 Lightning, offering an immensely flexible and potent combination to deliver military effect around the world,” Royal Navy Commodore Andrew Betton, Commander UK Carrier Strike Group, said in September.

While the F-35B affords the Royal Navy a potent strike platform, Great Britain chose to accept certain capability limitations in choosing to operate a STOVL-only aircraft carrier. Though Queen Elizabeth is an impressive vessel, the range and the payload of the aircraft it carries is limited compared to warplanes operating from conventional aircraft carrier designs. Moreover, if Britain wants to field support machines such as an airborne early warning aircraft, carrier onboard delivery aircraft or an aerial refueling tanker onboard the Queen Elizabeth class carriers, the Royal Navy has limited options. Essentially, Britain would have to rely on either helicopters or tilt-rotors for those roles. Thus, the question remains as to whether it was a good idea to build a STOVL-only carrier.