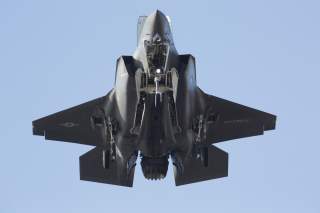 “It’ll be the return of fixed-wing maritime aviation to the U.K.,” Royal Navy Cmdr. Stephen Crockatt, the British team lead at the ITF, said. “From there on, the U.K. F-35B Lightnings can partake in supporting the defense of our realm from both land and sea, wherever the U.K. government decides.”

Under current plans, the F-35 IFT and Royal Navy will conduct two back-to-back FOCFT (FW) phases this fall. During those test phases, the F-35 test team expects to conduct a variety of maneuvers both in the air on the flight deck to develop the F-35B’s operating envelope onboard the Queen Elizabeth-class carrier, according to the U.S. Navy’s Naval Air Systems Command (NAVAIR).  The F-35 IFT expects to evaluate F-35B’s performance on over 200 test points during different weather and sea conditions as well as the aircraft’s integration with HMS Queen Elizabeth. Every aspect of the aircraft and ship’s performance will be monitored during the tests.

“They see every aspect of how the aircraft is performing and coping to different situations,” Royal Air Force Sq. Ldr. Andy Edgell, FOCFT (FW) lead test pilot at the Pax River ITF, said. “With thousands of parameters being monitored it is possible that they will identify emerging issues a long time before it becomes apparent to the pilot.”

One of the unique aspects of the FOCFT (FW) trails will be the F-35B test team’s efforts to validate the Royal Navy’s Shipborne Rolling Vertical Landing (SRVL) concept. Unlike U.S. Navy aircraft carriers such as the Nimitz and the Gerald R. Ford-classes, which are equipped with catapult launch systems and arresting gear, the British flattops do not feature such systems. Instead, the British vessel features a ski-jump similar in concept to that found on the Russian Kuznetsov-class carrier, but without arresting gear. Flight deck operations are conceptually similar to what might be found on a U.S. Navy large-deck amphibious assault ship such as the America-class, however, the SRVL technique will push the concept beyond that found on the Wasp-class and LHA-6s, allowing pilots to return to ship with more stores on the aircraft after a mission.

“[Rolling vertical landings] are an important phase of the workups because another unique aspect of going to the Queen Elizabeth-class carrier is that we will be conducting experimental testing of a novel recovery landing technique—the Shipborne Rolling Vertical Landing,” Edgell said. “SRVL tests are truly experimental... It involves landing a fast jet onto an aircraft carrier with forward relative speed but without the braking assistance typically provided by an arresting gear and hook. It’s going to be a really rewarding moment for British aviation to watch that procedure actually take place.”

Once the two current FOCFT (FW) effort are completed and the SVRL concept is validated, the Royal Navy is planning for a third FOCFT (FW) phase followed by operational testing is scheduled for 2019. Once that is complete, the British Ministry of Defense should be able to declare F-35B initial operational capability for maritime operations in 2020.